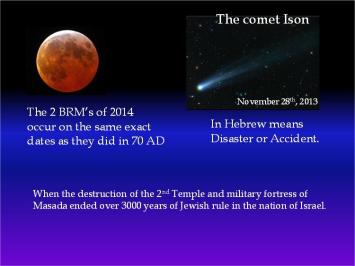 On March 15, 2015 the biblical New Year begins on Nisan 1. This is the first month on God’s commanded calendar (Exodus 12:2). This New Year will begin with a partial eclipse of the sun. Fourteen days later is the Feast of Passover which will be marked with a blood red moon. The next event on God’s calendar will be the Feast of Trumpets on Tishri 1, which will be September 13th on our calendar. This Feast warns of God’s impending judgment and will be highlighted with another eclipse of the Sun, this time a total eclipse. Following quickly will be the Feast of The Day of Atonement on September 23rd, the feast which warns of God’s judgment beginning to be meted out. This date, September 23rd, will also mark the beginning of the Year of Jubilee, a date which was to be one of great blessing in which debts were forgiven and freedom celebrated. However, because the Jewish people refused to honor its commandments, it became a year of curse to them. The final Blood Red Moon of 2015 will occur on September 28th which begins the Feast of Tabernacles, a feast commemorating the Lords coming to dwell with His people.

This will complete this Blood Red Moon Tetrad, a series of Blood Red Moons occurring exactly on God’s Biblical Feast Days. They are extremely rare and in the past have marked momentous historical events, such as the crucifixion of Christ, the formation of the state of Israel, and the retaking of Jerusalem by Israel to name a few. What will it mark this time?

Many believe these Feasts are only for Jewish people but, the Bible calls them God’s Feasts, or “appointed times”, and also commanded Gentiles to keep them (Zechariah 14:16). I believe their prophetic nature applies to us all, especially America, which has clearly enjoyed God’s calling and protection in its formation. These eclipses and blood red moons clearly signal times of change and trouble, so what can America look for in the near future?

There is another prophesy that should also get our attention; it is Jeremiah 18:1-10.

The message is clear; when a nation becomes ‘marred’ it is fit only for destruction unless it repents. America has clearly been planted by God and also blessed by Him. Immigrants from all over the world recognize this and want to come here. But, if we do evil in His sight, and do not obey His voice then we will be plucked up, pulled down, and destroyed!

We have done all these things and we willfully choose our own way. We will not allow prayer to Him in our schools and often not in public. We allow homosexual sin and even celebrate and protect it. We kill our unwanted children thus denying God as the ‘life giver’ as well as the blessing these children might have been to us. We put up with lying by our leaders calling it being politically savvy. We deny the blessing of marriage, allowing divorce, even honoring the industry which spreads fornication and adultery around the world with our money in the name of entertainment. Because we have chosen this path as a nation, God has given us leaders that are devoid of judgment and wicked. We deserve the judgment that is soon coming. We will be pulled from our lofty position as a financial and moral leader in the world. Probably the only positive for us is our support of Israel and now that seems questionable.

One chance for us remains – repentance!

“If that nation, against whom I have pronounced, turn from their evil, I will repent of the evil that I thought to do unto them.”

One thought on “Blood Red Moons and Jeremiah 18”