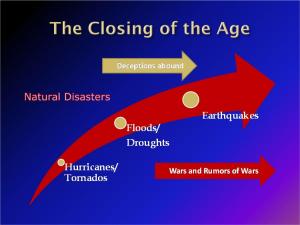 Jesus gives graphic signs of the approaching end, call them signposts. They involved natural disasters, such as hurricanes and tornadoes, floods,droughts and earthquakes, increased deceptions and wars and rumors of wars. Now the world has always had these disasters but, Jesus is talking about their increasing magnitude and frequency – He said they would be like birth pangs. If you don’t know what they are, ask a woman who has born children.

In today’s news they have become so frequent that people are becoming desensitized to them. Yet, what if they are warnings from God shouting, “Wake up! the end is nearer than you think!” Perhaps it would wise for us to take a closer look. The year 2012 held a tremendous increase in these heavenly and earthly signs and they have continued throughout 2013 and 2014 with the promise of 2015 being some kind of culmination of their message. Jesus was not the only prophet to speak of these end-time events, many Old Testament prophets did. The prophet Hosea had this to say –

“There is no truth or mercy or knowledge of God in the land. By swearing and lying, killing and stealing and committing adultery, they break all restraint, with bloodshed upon bloodshed. …. Therefore the land will morn; everyone who dwells there will waste away with the beasts of the field and the birds of the air; even the fishes of the sea will be taken away.” – Hosea 4:1-3

In 2012 this began to be fulfilled! Unexplained mass die-offs of cattle, buffalo,

fish and birds began to happen world-wide. While many of the news networks did stories on then, few if any mentioned they might be a result of our sin or that God may be trying to get our attention! Hosea highlighted swearing and lying (that means giving your word then breaking it), which seems to be the normal mode of doing business today! It certainly accurately describes present day government whose clear policy is “the end justifies the means”. The number of lies about the Affordable Health Care law, Benghazi, Fast and Furious, inflation, unemployment, immigration, stealing from the taxpayers to pay for government favored ponzi schemes are enumerable! A simple look at marriage and divorce statistics gives a clear picture of the physical adultery but spiritual adultery is just as bad and it is maybe more prevalent than physical adultery in to days world. Then there are the 60 million babies America has aborted, sometimes tearing them apart in the womb in ways that are more barbarous than an ISIS beheading! This is what is causing the land to morn. Fox News aired a show highlighting these disasters in 2011:

There are other signposts as well and one involves the preaching of the Gospel in all the world. Jesus said –

“And this gospel of the kingdom shall be preached in all the world for a witness unto all nations; and then shall the end come.” – Matthew 24:14

How close are we to this benchmark? The Christian Almanac for 1990 reports that the Gospel has been preached to over 4 billion people, and Christian Churches now exist in all 251 countries of the world. The entire Bible, or portions of it, have now been translated into some 2,062 different languages, and is available to around 98% of the world’s population. Never in the entire course of history has the Gospel been preached in all the world to all nations as it is right now! Also consider that radio, television and internet covers all parts of the world. Every nation on the face of the earth today has heard the Gospel as Jesus prophesied they would before the end comes.

Jesus also predicted that society would be like Sodom and Gomorrah and the days of Noah before the end of days. We have certainly seen homosexuality rise to the point where preachers can be fined and jailed for preaching what the Bible has to say about this abomination. God’s model of the family is under attack from media, entertainment and government alike. And the days of Noah may also be upon us. Un-imagined demonic activity is taking place in western cultures and there even seems to be evidence of the Nephilim (human – demon crossbreeds). Every kind of wickedness occurs and people go on as if nothing is wrong. These are the days of Noah that Jesus described.

“There were giants on the earth in those days, and also afterward, when the sons of God came in to the daughters of men and they bore children to them. Those were the mighty men who were of old, men of renown. … Then the LORD saw that the wickedness of man was great in the earth, and that every intent of the thoughts of his heart was only evil continually.” – Genesis 6

All these happenings will lead to the revelation of the Antichrist. The Book of Revelation. chapters 12 and 13 give us strong descriptions of him and his “John the Baptist” like promoter, otherwise known as the False Prophet (Revelation 19:20). However, before his revealing, there a several other things that must happen: 1) the war prophesied in Psalm 83, 2) the war described in Ezekiel 38 and 39, 3) the rebuilding of the 3rd Jewish Temple in Jerusalem, and 4) a great falling away (apostasy) in the Christian Church.

Where we are at in all these prophesied events, you should judge. It is my belief that we are closer than many believe. These ‘signpost’ warnings were given to us so we could prepare by getting our lives on right footing with God. The way to do that is 2-fold; 1) make Jesus your friend and Savior, and 2) yield fully to the Holy Spirit who is given to guide us through these trying times.

2 thoughts on “Signposts pointing to the End”