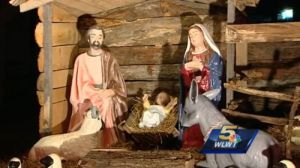 Scriptures have an encouragement for us in the day we live in, such as facing the attacks of unbelievers like the Freedom from Religion Foundation in Wisconsin –

Therefore take up the whole armor of God, that you may be able to withstand in the evil day, and having done all, to stand. – Ephesians 6:13

Paul is instructing us how to react to  “wiles of the devil” that will surely trouble us whenever we attempt to honor God. The city of Brookville, Indiana is fighting to keep a Nativity Scene that has been there since their founding 50 years ago. One resident had this to say about this problem:

“If people don’t like the look of it, I think they can look the other way or don’t look at all,” Brookville resident Wayne Monroe told WLWT. “It’s been a tradition here for many, many years, and I hope it’s for many more years. I think we deserve the right to put up what the community wants and I don’t think anybody else should tell us what to do.”

Even though anti-Christian sympathizers, such as President Obama, don’t like to admit it, America has been a Christian nation since it’s beginning. I don’t mean we are a theocracy but we are a country founded on Christian principles and Christians are still the majority of citizens in this country.

Eighty-three percent of Americans identify themselves as Christians. Most of the rest, 13 percent, have no religion. That leaves just 4 percent as adherents of all non-Christian religions combined — Jews, Muslims, Buddhists and a smattering of individual mentions.

This is not a case of individual freedom, it is a case of the tail trying to wag the dog! One Biblical principle is “be kind to the strangers among you”, but this does not mean they can change the way the overwhelming majoring of us think or celebrate Christmas. The Freedom from Religion Foundation, Muslims, and atheists trying to force their standards or non-standards upon the rest of us are certainly “Strangers” to America.

I applaud the people of Brookville, Indiana and I encourage them to take Paul’s advice and STAND!

One thought on “Stand”