Every government has a foreign policy which consists of; 1) its goals (what it wants to achieve), 2) its plan for implementation of the goals, and 3) its response to others actions concerning the goals.

God is no different, in fact He is the author of this type of reasoning. People may be free to do their own thing, but, there are consequences to their actions, both as individuals and as nations. God’s foreign policy concerning Israel is clearly set forth in Scripture –

I will make you a great nation; I will bless you And make your name great; And you shall be a blessing. I will bless those who bless you, And I will curse him who curses you; And in you all the families of the earth shall be blessed.“ – Gen. 12:2,3

History teaches us the truth of this policy. During WWI and WWII the nations that cursed the descendants of Abraham were 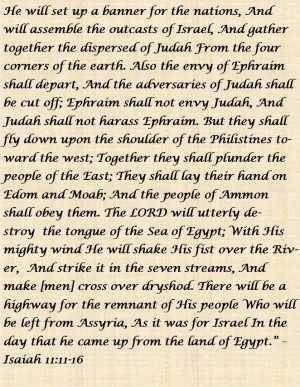 cursed and those who blessed them were blessed. Ones that immediately come to mind are the Ottoman Empire (Turkey), England, Germany, and the USA. They were either cursed or blessed depending on their actions toward Israel.  And out of Israel came forth the Savior of the world and “all the families of the earth have been blessed” in Him, if they receive Him.

In these last days, God has set His hand to gather the outcasts of Israel again to their own land. What the nations of the world have a difficult time understanding is, the Land is God’s to give to whomever He wishes. Israel went into captivity because of their sin and God dispersed them as a punishment, but it was not an everlasting punishment and God is now bringing them back to His land. Those who oppose this will be judged.

I will also gather all nations,
And bring them down to the Valley of Jehoshaphat;
And I will enter into judgment with them there
On account of My people, My heritage Israel,
Whom they have scattered among the nations;
They have also divided up My land. – Joel 3:2

Since Israel has been back in the land, the Islamic peoples mentioned by Isaiah have all started wars with Israel with the end result of Israel gaining more land. The Philistines (Palestinians), Edom, Moab, and Ammon (which make up modern day Jordan), Egypt, and Assyria (which is made up by Syria, Lebanon, and parts of Iraq) all have lost ground in the 1948, 1957, 1967, 1973, 1982 wars and the infatada that have been waged. Now, like bullies who run to the teacher for help after the boy they are bullying fights back, they are crying for the United Nations to return the land they lost. But, the United Nations cannot but do itself harm if it intercedes on their behalf, because God has not yet completed His plan to restore Israel. If the nations of the world do not submit to the Lord, as Psalm 2 suggests, they will be brought down in the Valley of Jehoshaphat where they will be judged.

Why do the nations conspire and the peoples plot in vain? The kings of the earth rise up and the rulers band together against the LORD and against his anointed, saying, Let us break their chains and throw off their shackles. The One enthroned in heaven laughs; the Lord scoffs at them. … Kiss his son, or he will be angry and your way will lead to your destruction, for his wrath can flare up in a moment. Blessed are all who take refuge in him. – Psalm 2:1-12

Isaiah 11 could have signaled a great blessing to the nations had they welcomed Israel back. God intends Israel to be a blessing to the nations; in agriculture, in technology, in medicine, etc. .  But, in their rebellion, the Islamic nations brought war and defeat. And the process is not done yet. Psalm 83 is a prophesy of the continuation of Isaiah 11 in which the nations surrounding Israel will be judged and Israel will expand into the land promised to them by God.

In following posts, I will show how this be done and why I think it will be a prelude to Ezekiel 38, the war of Gog and Magog.