The Scope of Daniel

The Revelation Daniel received is sweeping in its scope; covering the Gentile empires that will rule the world and the future of the Israeli people and even the Church, beginning with the return from Babylonian captivity and rebuilding of Jerusalem in Daniel’s time, then stretching forward in time to the first coming of Messiah, and culminating with the coming of Antichrist at the end of the age. We are examining his vision concerning the 70 weeks of Jewish history after their return from Babylonian captivity. It is found in the Book of Daniel, chapter nine, and verses 24 through 27.

This prophesy is divided into three sections and in the first edition, I covered the first section. In this edition I will cover the second section.

“Know therefore and understand, that from the going forth of the commandment to restore and to build Jerusalem unto the Messiah the Prince shall be seven weeks (1st section), and threescore and two weeks (2nd section): the street shall be built again, and the wall, even in troublous times. And after threescore and two weeks shall Messiah be cut off, but not for himself (or and shall have nothing):” – Daniel 9:25-26f section inserts added

In the 2nd section, threescore and two weeks are added, which equals 62 weeks of prophetic years (hereafter referred to as pyrs) or a total 434 pyrs. When this is added to the 49 pyrs of the 1st section we have 49 + 434 = 483 pyrs until the first coming of Messiah (this will be important for the calculations that will follow later).

Gabriel reveals to Daniel that when Messiah comes, He “shall be cut off, but not for Himself”. This must have been a startling thought for Daniel who had been faithfully waiting for the coming Messiah. But we have the benefit of history to explain it to us and we know Messiah was rejected and did not receive the Messianic kingdom when He first came. He was indeed ‘cut off’ but not for His own sins, but for ours.

“But he was wounded for our transgressions, he was bruised for our iniquities: the chastisement of our peace was upon him; and with his stripes we are healed.” – Isaiah 53:5

Now we come to the calculations of the date Messiah will come the 1st time and the reason why many Jews today no longer count Daniel as a prophet.

First, this 2nd section reveals Messiah will come in 483 pyrs. Since a prophetic year is 360 days, this time period will be: 483 pyr x 360 day/pyr = 173,880 days on our calendar. Now we will examine the date of the crucifixion of Jesus according to the Bible.

1. Scripture fixes the Lord’s 1st Passover of His ministry as the Hebrew month of Nisan A.D. 29.
2. His crucifixion took place at the 4th Passover of His ministry, or Nisan A.D. 32.
3. At this time, He went up to Jerusalem on the 8th of Nisan, which was a Friday, spent the Sabbath in Bethany, and entered Jerusalem the following day, which was Sunday, the 10th of Nisan. This date in our calendar was April 6, A.D. 32.
4. What is the interval between March 14, B.C. 445 (the date of Artaxerxes command to rebuild the walls of Jerusalem) and April 6, A.D. 32? It is 173,880 days, or seven times 69 prophetic years of 360 days! Jesus made His Triumphant Entry into Jerusalem on the exact day Daniel prophesied He would. There is no doubt Jesus is the Messiah – God proves it in His Scripture. (If you are adventuresome and want to calculate these dates for yourself, remember there is no 0 year. The calendar goes from 1 B.C. to 1 A.D.)

This 2nd section of Daniel’s revelation finishes the period of kings for Israel. 38 years after the crucifixion of Jesus the 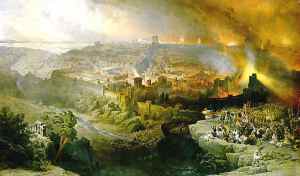 Romans destroy the Temple and the city of Jerusalem, ending the sacrificial system and Jewish rule over the city of Jerusalem. The Roman general Titus did this in 70 A.D…Then in 134 A.D., after an unsuccessful revolt by the Jews led by Bar Kochba, the Jews were dispersed throughout the world and the period of the Diaspora began. This also began the period Jesus called “the times of the Gentiles” (Luke 21:24), a period of time in which Gentiles would rule over Israel and Jerusalem.

“… and the end thereof shall be with a flood, and unto the end of the war desolations are determined” – Daniel 9:26ff

The angel Gabriel’s descriptions of this time apply describes the 2000 year time gap that follows. Over the period of time known as the Diaspora a ‘flood’ of Gentile people have persecuted the Jews and many have tried to exterminate them altogether. The phrase “unto the end of the war” can best be understood by reading Revelation 12 where the war of Satan against the Jews is fully described.

And so all Israel will be saved, as it is written: “The Deliverer will come out of Zion, And He will turn away ungodliness from Jacob; For this is My covenant with them, When I take away their sins.”

As we have witnessed the restoration of Israel and Jerusalem once more under Jewish control, we know this ‘times of the Gentiles’ is soon over. And the time for finishing ‘transgression’ and ‘make an end of sin’ is fast approaching.

The last of this prophesy will be continued in the next post: Daniel’s 70 Weeks – part 3. While we have the benefit of history to judge Daniel’s vision so far, the last part is unfolding as I write. We are living it! There is yet time to embrace the Savior who has come the 1st time and paid for your redemption but – the time is drawing to a close.

If you have not yet turned your life over to God and made peace with the Prince of Peace, Jesus Christ, it is time to do so. Don’t wait for you do not have much time left.