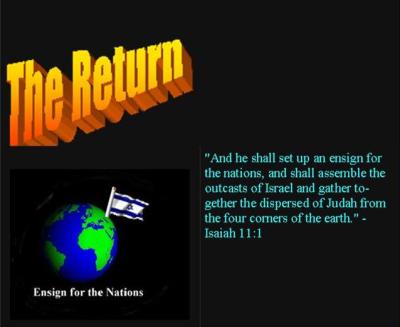 We have seen much of Daniel’s vision come to pass but now we enter into murky waters. The third part of the vision has yet to happen, but the elements that are needed for it to be fulfilled may already be working. We now look at the 3rd part of the vision:

“… and the people of the prince that shall come shall destroy the city and the sanctuary; and the end thereof shall be with a flood, and unto the end of the war desolation’s are determined. And he shall confirm the covenant with many for one week: and in the midst of the week he shall cause the sacrifice and the oblation to cease, and for the overspreading of abominations he shall make it desolate, even until the consummation, and that determined shall be poured upon the desolate (or desolator).” – Daniel 9:26-27

The phrase “unto the end of the war desolation’s are determined” describes the period of time between the dispersal of Israel and the appearing of the Antichrist. Destruction and disaster have been the story of the Jewish people until this time, but as God’s time of restoring them approaches, the spirit of Antichrist is hard at work stirring up the nations for the final onslaught.

Soon “the prince” will appear, if he hasn’t already. He will be at work encouraging the nations into taking actions that will ensure their weakening, or destruction, while at the same time he will be laying the groundwork for a ten-nation confederacy that he will rule as the final kingdom seen earlier by Daniel (Daniel 2:31-35). He will be Roman.

“… And the people of the prince who is to come Shall destroy the city and the sanctuary.” – Daniel 9:26

We know from history that it was the Romans who destroyed Jerusalem and the Temple in 70 AD. But, we must remember that Rome was divided into western and eastern kingdoms. As Daniel 2 shows, Rome was divided into two legs of iron. This ‘prince’ could come from any part of it. Indeed, since Rome has so influenced much of the modern western nations, he may even come from one of them. Wherever he comes from, those who are watching will recognize him when he confirms a 7-year covenant of peace with Israel. It may be called a ‘security agreement’ but, he will break it after only 31/2 years. Revelation 12 and 13 chronicle much of this prince’s activity where he is described as a ‘beast’.

Most prophesy scholars think the reference to ‘ten horns, and on his horns ten crowns’ is a reference to a ten nation confederacy that this prince will rule over. That is why the formation of the European Union is so closely watched. It began with ten prime members and it has made several ‘security agreements’ with Israel in the past. I am not saying that the EU is this confederacy, only that they illustrate the pattern of what will come. 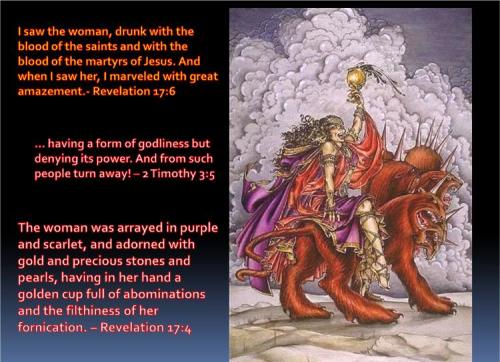 Revelation 17 and 18 also reveal a cooperation between the Harlot (which is the false church) and the beast. While the false church has been around for a long time, in these end days she shows her true colors even “riding the beast”. It will be imperative for all true believers to separate themselves from this false religious system.

“And I heard another voice from heaven saying, “Come out of her, my people, lest you share in her sins, and lest you receive of her plagues.” – Revelation 18:4

How can you distinguish the true Church from the false? Wheat and tares look much the same except as the wheat matures, its heads bend over with the added weight while the tares remain upright. Pride and self-esteem are the distinguishing characteristics of tares. They lift the glory of man while the wheat lifts only the glory of God. The false church is humanistic. It says “we must reach the lost because we don’t want them to suffer the pains of hell!” They want to have program after program to make mankind more comfortable and make his life here on earth more enjoyable. They are infiltrated by the motivations of the world. The true Church is only concerned with ensuring Christ receives the rewards of His suffering. Mankind is wicked and reprobate and deserves hell but, Christ suffered for them that they might be redeemed and He deserves His reward and all the glory of it! The true Church does not seek the world or any part of it. Like Joseph of old, it flees from the temptations of the world. And the true Church loves the truth – all of it. The Apostle Paul describes the condition of those in the false church –

“The coming of the lawless one is according to the working of Satan, with all power, signs, and lying wonders, and with all unrighteous deception among those who perish, because they did not receive the love of the truth, that they might be saved. And for this reason God will send them strong delusion, that they should believe the lie, …” – 2 Thessalonians 2:9-12

Another element to watch for is the rebuilding of the Temple in Israel. This has not yet happened but, Daniel makes it clear it must happen either before his 70th week or during the first 31/2 years of it.

“and in the midst of the week he shall cause the sacrifice and the oblation to cease, and for the overspreading of abominations he shall make it desolate, even until the consummation, and that determined shall be poured upon the desolate (or desolator)”

In Judaism the sacrifices and oblations can only be made in the Temple in Jerusalem. There are currently many in Israel who are working to re-establish Temple worship and rebuild the Temple. However, the political pressures of the day forestall this from happening. But when the Psalm 83 and Ezekiel 38 wars occur, that pressure will be removed. Or perhaps a 7 year treaty with a strong European leader may allow it as well. Whatever the enabling event is, the Temple will be rebuilt and the ‘prince’ that is coming will set up his abomination in the Temple just as Daniel and Jesus predicted.

“Therefore when you see the ‘abomination of desolation,’ spoken of by Daniel the prophet, standing in the holy place” (whoever reads, let him understand),” – Matthew 24:15

This ‘prince’ of Daniel, the ‘beast’ of Revelation, will make war with saints and overcome them (Daniel says ‘wear them down’). He will seemingly be unstoppable and the people of the world will say “Who is like the beast? Who is able to make war with him?” (Revelation 13:4). He will devise many schemes to control people including the control of food and the money systems all the while demanding the people worship him as god. But, his time is short, only 31/2 years. At that time he will gather the armies of the world against Jerusalem. They will gather in a place called Armageddon (har Megiddo in Hebrew) to begin their march towards Jerusalem. It is at that time that the Lord will come, as Enoch of old prophesied –

“Now Enoch, the seventh from Adam, prophesied about these men also, saying, “Behold, the Lord comes with ten thousands of His saints, …” – Jude 1:14

“Then I heard a loud voice saying in heaven, “Now salvation, and strength, and the kingdom of our God, and the power of His Christ have come, for the accuser of our brethren, who accused them before our God day and night, has been cast down. “And they overcame him by the blood of the Lamb and by the word of their testimony, and they did not love their lives to the death.” – Revelation 12:10, 11