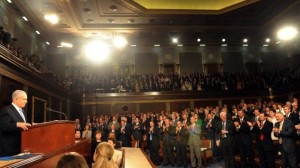 Recently, the United States Congress heard a message they have not heard very often. It was a message of courage and fearlessness by the Prime Minister of Israel. The basic challenge was “BE NOT AFRAID!” While those exact words may have not been used, they could have. It reminded me me God’s encouragement to Joshua and Hezekiah of the Old Testament.

To Joshua: “Have not I commanded thee? Be strong and of a good courage; be not afraid, neither be thou dismayed: for the LORD thy God is with thee whithersoever thou goest.” – Joshua 1:9

To Hezekiah: “And Isaiah said unto them, Thus shall ye say unto your master, Thus saith the LORD, Be not afraid of the words that thou hast heard, wherewith the servants of the king of Assyria have blasphemed me.” – Isaiah 37:6

Prime Minister Netanyahu basically encouraged the United States to stand up to Iran and their threats by demanding what we want and not caving in to what they want. Of course, the liberal fear mongers both in this country and in Israel immediately attacked him and started apologizing to Iran and every other Islamic terrorist group in the world for his strong talk. Their basic problem is they have no one but themselves to depend on and Islamic terrorism scares them!

Both Joshua and Hezekiah knew they were not in the fight on their own – they had God’s backing! The Philistines and the Assyrians had blasphemed God and that is exactly what is happening today. The modern Philistines are the Palestinians; Hamas, PLO, Al Qaeda,  etc. and the Assyrians (who invented terrorism) are Hezbollah, ISIS, Iran, etc. All these groups are mocking the God of the Bible claiming Allah and not Jehovah is the true God and their stated goal is to kill Christians and Jews, which they do at every opportunity. Since they cannot get at God, they go after His followers.

Now, in America and other parts of the world we have non-Muslim people basically “quaking in their boots” desperately trying to appease Islam. New York allows Muslims to block downtown traffic for prayer; Public Schools – who won’t celebrate Christmas or Easter – now plan to close schools for Muslim holidays; protesting public eating of pork or allowing dogs in taxis, etc. Why give in to this mild form of terrorism? Because they have no belief in anything better!

We have a President who does not honor Christian holidays but celebrates Muslim holidays and 40% of the people approve of his actions as president so why be surprised that we cannot stand up against terrorism? He doesn’t even want to call it terrorism! His administration not only won’t stand up against Iran’s bullying but it goes to them hat in hand asking if we could help them fight another terrorist group (ISIS) only to be rebuffed! How shameful for America, who once led the world in standing against tyranny and fascism.

Then we have a world leader who speaks without fear calling terrorism for what it is and encouraging us to not be afraid, reminding us of a God who delivers His people – a God we once believed in! No wonder he got standing ovation after ovation. We all should mark those who stand against his message as modern day Hamans – the Persian (Iranian) who once before tried to destroy the Jews! (Ester 3:6).

These nay-sayers worry, ‘it may bring war’, but I say “It may bring peace” as bullies rarely want to fight a battle they cannot win! But, the missing element is trusting in the true God of of heaven – Jehovah! If we do, we have nothing to fear. As was said to King Hezekiah –

“But now thus saith the LORD that created thee, O Jacob, and he that formed thee, O Israel, Fear not: for I have redeemed thee, I have called thee by thy name; thou art mine. When thou passest through the waters, I will be with thee; and through the rivers, they shall not overflow thee: when thou walkest through the fire, thou shalt not be burned; neither shall the flame kindle upon thee. For I am the LORD thy God, the Holy One of Israel, thy Saviour:” – Isaiah 43:1-3