The world today is in turmoil and confusion. The winds of war are sweeping the Middle East; the winds of financial ruin are sweeping Europe; the winds of tolerance and political correctness are sweeping America, England, and Australia; and the little tornadoes of greed, sexual immorality, religious heresy,  and pride randomly reap their havoc wherever they will. One thing is certain, there is no peace. Politicians promise hope and change but they are incapable of producing it and their plans only produce more havoc and slavery to the people they represent.

There is only one way to peace and that is through the Prince of Peace – Jesus Christ. The only hope that exists in life is Hope in God because He is the only One who can truly change you and your circumstances. His precepts are the only ones that work for any society. History proves that “blessed is the country whose God is the LORD.” Why is the whole world either hating the United States with envy or trying to immolate it? Because our forefathers knew this principle and built the country on these Scriptural principals. The result was freedom and prosperity. The foundations they built are yet there even though they are crumbling. 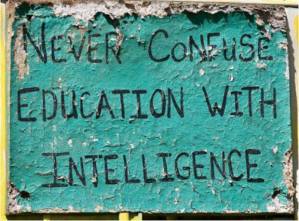 Our early schools and colleges all believed this and promoted it in their curricula. But Satan is wise and he understands that children are the key to long term success or failure in any society. From the early 1900’s on he wormed his influence into the schools, teacher’s colleges, and Universities of America. Tomas Dewey, a disciple of Marxist socialism, began to reshape teacher’s colleges with his philosophy. They produced teachers who began to gradually change the minds of their students. Soon America had several generations of young people who looked on God as a myth and on Christian principles as unsupported and outmoded bondage’s. Now the Bible and prayer to God is outlawed from public schools. Godless evolution has won the day. Lost is the simple faith in God that produced true peace and hope for the future. The virus of unbelief even infected America’s churches and they went into hiding or became assimilated to the world’s culture for the sake of prosperity.

In the absence of true Christianity the virulent virus of Islam is beginning to grow in countries that were once Christian. Islam substitutes a false god for the true God and rigid order for the chaos of a crumbling society whose foundations are forsaken. This is appealing to those who have no foundation to build upon and no moral compass for direction. But, there is no liberty in Islam and there is only slavery and death to those who will not conform (The Quran, Hadith, and Sunna contain the words ‘cut’, ‘kill’, or ‘attack’ 36,800 times).

Divine judgment is coming and it is not far off. As far as you know, it may only be a heartbeat away! But, God is calling to you –

“The sun shall be turned into darkness, and the moon into blood, before the coming of the great and awesome day of the LORD. And it shall come to pass that whoever calls on the name of the LORD shall be saved. For in Mount Zion and in Jerusalem there shall be deliverance, as the LORD has said, among the remnant whom the LORD calls.” – Joel 2:31, 32

The Blood Red Moons of 2014 and 2015 are a warning to all to get prepared for the great and awesome Day of the Lord. God does not want any to perish and He is able to forgive, cleanse, and restore any and all who truly repent (‘foxhole’ repentance not accepted), calling on the name of God’s sacrificial Lamb, Jesus Christ. If you are a Christian who has stumbled and fallen away, now is the time to repent and turn back. If you are an unbeliever, hidden within you is a spirit given by God that is calling you home – answer the call. Return and like the Prodigal son of Luke 15, you will be accepted.

If you are a Muslim, turn to the true God who alone can give you a heavenly reward and grant you true peace in your heart. He alone can give you true love and acceptance. You were made in the image of the living God, one person but three expressions of that person; body, soul, and spirit. Christians are not ‘polytheists’. We believe in One God who is expressed in three ways; Father, Son, and Holy Spirit. All are One but they come to us in different ways, ways we can receive.