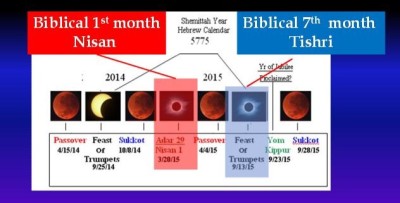 “And I will show wonders in the heavens and in the earth: Blood and fire and pillars of smoke. The sun shall be turned into darkness, and the moon into blood, before the coming of the great and awesome day of the LORD. – Joel 2:30, 31

The prophet Isaiah also describes a similar event before the coming of the Lord: “The sun will be darkened in its going forth, And the moon will not cause its light to shine.” (Isaiah 13:10). Both of these events, the sun being darkened (solar eclipse) and the moon turning blood-red (lunar eclipse), are being displayed right now in the Blood Red Moons Tetrad of 2014 and 2015. The fact that the solar eclipses happen on Nisan 1, the beginning of God’s Biblical calendar, and on Tishri 1, the Feast of Trumpets and the beginning of the Jewish New Year, give warning to Israel to prepare for war and warning to the nations that their judgment is near. Given that these are extremely rare occurrences and will never again happen in our lifetime we should pay attention to them as warnings from God Almighty.

Do these heavenly signs have anything to do with the war predicted in Psalm 83? In this Psalm, Asaph predicts a future war against Israel by the surrounding peoples.

“For behold, Your enemies make a tumult; and those who hate You have lifted up their head. ​​They have taken crafty counsel against Your people, and consulted together against Your sheltered ones. They have said, “Come, and let us cut them off from being a nation, that the name of Israel may be remembered no more.” – Psalm 83:2-4

As I have written before, the people named in this Psalm are all people groups presently surrounding Israel (see Psalm 83-part 2). These people all fit within an area surrounding Israel that can be framed by a pentagram. Table 1 gives their modern names. There is no doubt these people are all Islamic and bear no love for the nation of Israel but, they are also not in a hurry to commit suicide! So what would convince them to attack Israel? Perhaps a more radical group taking them over would be catalyst that brings this war about? There is presently just such a faction that is moving with alarming swiftness and success in the region – ISIL, or ISIS, or just plain IS, which stands for Islamic State. ISIS already controls large areas of Syria and Iraq and has splinter groups in Jordan, Sinai, and elsewhere. Does it have it’s sights on Jordan? Well, let them speak for themselves:

‘Allah alone knows just how much the soldiers of the caliphate yearn for skipping the necessary stages and battle the Jews in Palestine, but he who rushes something before its time comes, shall be punished by being denied it.'”

‘No one can initiate a battle against Israel except through the [direct] borders.’ The jihadi then adds sarcastically, ‘Certainly, the mujahideen will not be able to bomb Israel by air. . . IS is still far from Israel: If it reaches Jordan and southern Syria (the Golan and Quneitra), then things will be different.’

Already Jordanians constitute the third biggest component within ISIS — estimated now at over 3,000 and Jordan is having financial problems maintaining their fight against ISIS. They are being propped up financially by Saudi Arabia, which has its own problems with homegrown ISIS insurgents. US bombing of ISIS has been less than effective and ISIS has more than doubled the territory they control since it began. Countries like Egypt, Jordan, and Saudi Arabia have seen by recent actions in Yemen, Egypt, and Libya that the United States is not a partner to depend on! So have the radical Islamist!

If we see ISIS attack Jordan, we could be witnessing the opening of the Psalm 83 war, because Israel will never let themselves be surrounded by ISIS. The same would be true for Iranian backed Syria and Hezbollah.

Whatever the catalyst is, the Blood Red Moons seem to be warning of soon coming war. We must remember that all this trouble is being instigated by Satan to destroy God’s people Israel and Christians. While our focus may be attracted on the Mid East, Satan is also at work in Europe and the United States to weaken and destroy God’s peoples. The Trumpet call of the feast of Trumpets is to warm all God’s people to be ready for the battles to come, both spiritual and physical!

One thought on “The Blood Moons and Psalm 83”