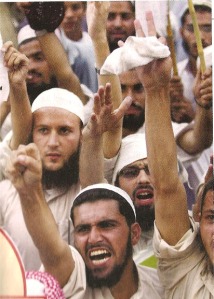 Muslims calling for execution of Christian

“And unto the angel of the church in Smyrna write; These things saith the first and the last, which was dead, and is alive; I know thy works, and tribulation, and poverty, (but thou art rich) and I know the blasphemy of them which say they are Jews, and are not, but are the synagogue of Satan. Fear none of those things which thou shalt suffer: behold, the devil shall cast some of you into prison, that ye may be tried; and ye shall have tribulation ten days: be thou faithful unto death, and I will give thee a crown of life. He that hath an ear, let him hear what the Spirit saith unto the churches; He that overcometh shall not be hurt of the second death.” – Revelation 2:8-11

Jesus is dictating a letter to seven churches in Asia Minor through John. Historically, we know that there were more than seven churches at the time but, these were selected to represent messages to all churches in any circumstance. Smyrna is the second church selected by Jesus, and the only one identified as experiencing persecution. Does this mean they alone suffered persecution? No, we know historically that this was not the case. It is rather a message to the Church at large about how to act in the midst of persecution. They were not an affluent church and besides suffering persecution also suffered from poverty.

No one likes to think about persecution, but all the writers of the New Testament warn us that we will suffer persecution. Paul writes –

“All that will live godly in Christ Jesus shall suffer persecution.” – 2 Timothy 3:12

Even Jesus promised His followers would be persecuted – Luke 21:12. What is the source of this hatred? It is Satan. Jesus said , “If they have hated Me, they will hate you, for the servant is not above his master.” As Jesus warned the church of Smyrna, this persecution will come mostly from ‘religious’ sources. Remember, who was it that persecuted Jesus? It was basically religious Jews. The Roman Pilate went along with it to keep the peace, but Jewish religious leaders were the force behind it. Jewish synagogues (or congregations), who didn’t want to embrace the truth of the Gospel persecuted those believers in Smyrna. Ever since Cain and Abel the religious have been persecuting the righteous. However, this is not just a Jewish problem for true followers of God have always been persecuted by the religious down through the ages, and it will only intensify at the end of the age. Catholics have persecuted Lutherans, Lutherans persecuted other Protestants, and they all have persecuted each other from time to time. Today Christians are persecuted  and martyred in China and North Korea by Communists, in India by Hindus and Muslims, and all over the Mideast by Muslims. It is even beginning in western countries, although not as violently yet but, the threat is there. 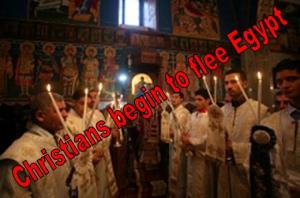 Notice, in the letter to the church of Smyrna, Jesus refers to poverty before He mentions persecution. That is because when the pressures of poverty strike any people they often look for a scapegoat, and the devil sees to it that God’s people are blamed. We are seeing this happen in our day. From Egypt to Africa people are rioting, even overthrowing their governments – why? There is no food and what is available is often to expensive for common people to buy. In Egypt, Coptic Christians are suffering from poverty as much as Muslim Egyptians but, the Muslims use it as an excuse to turn on the Christians, burning their churches, killing them, and causing them to flee Egypt. The lack of food and its associated problems are behind many of the revolts going on around the globe. This problem is not going away but will intensify as water shortages, food shortages, and increasing prices continue rising – according to the World Bank up 36% since June of 2010. Jesus warns this will lead to more persecution. 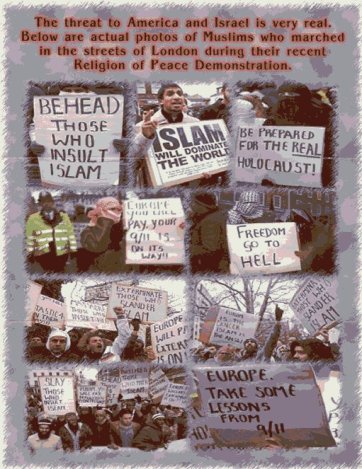 Muslims March for Peace in London

Another reason for increasing persecution will be rebellion against the truth. As Christians live godly lives, the will automatically stand out as witnesses against ungodliness. And as ungodly living reaps its own rewards of disease, unhappiness, and guilt Satan will blame Christians for it! As light exposes darkness, righteous living will expose unrighteousness – and those in darkness will not like it, even though they may have a name for following Jesus.

“Why do the heathen rage, and the people imagine a vain thing? The kings of the earth set themselves, and the rulers take counsel together, against the LORD, and against his anointed, saying, Let us break their bands asunder, and cast away their cords from us.” – Psalm 2:1-3

Not only will the ‘religious’ persecute believers but, governments will also pass laws trying to silence the Christian testimony. But, it cannot be done! God will simple laugh at their foolishness.

“He that sitteth in the heavens shall laugh: the Lord shall have them in derision. Then shall he speak unto them in his wrath, and vex them in his sore displeasure.” – Psalm 2:4-6

But to those who suffer for Christ’s sake, He has a word of comfort – it will only last 10 days, in other words, a short time. If we are faithful, He will give us the “crown of life” which is eternal. “He who overcomes shall not be hurt by the second death.” Remember, we must all die once but, the second death will come to the unfaithful as the judgment throne of God as they are thrown into the lake of fire forever.

“And I saw the dead, small and great, stand before God; and the books were opened: and another book was opened, which is the book of life: and the dead were judged out of those things which were written in the books, according to their works. … And death and hell were cast into the lake of fire. This is the second death. And whosoever was not found written in the book of life was cast into the lake of fire.” – Revelation 20:12-15

But rejoice all you who have or will choose to follow Jesus, instead of that death, you as a faithful saint will have the crown of eternal life.

One thought on “To the Seven Churches – Smyrna”