When God created the heavens and the earth He placed in the heavens patterns among the stars that have prophetic messages for mankind. Some have been fulfilled and some are yet to be fulfilled. One, which has end-time implications, is about to be fulfilled – it is the sign of the Seed of the Woman, which is displayed in the constellation Virgo.

“And God said, Let there be lights in the firmament of the heaven to divide the day from the night; and let them be for signs, and for seasons, and for days, and years” – Genesis 1:14

“And I will put enmity between thee and the woman, and between thy seed and her seed; it shall bruise thy head, and thou shalt bruise his heel.” – Genesis 3:15.

This is the first mention of the war between Messiah and Antichrist. Nearly 6000 years have passed since that encounter and promise, and the war has continued. Some have lost faith and given up hope saying –

“Where is the promise of his coming? for since the fathers fell asleep, all things continue as they were from the beginning of the creation.” – (2 Peter 3:4)

but, God has not forgotten and the story is forever written in the stars of heaven, in the constellation Virgo – the Virgin. This sign is about to fulfill that promise made so long ago. It is possible that the final battle of the war between Christ, the Devil and his Antichrist is about to happen.

While the constellations get their names from the stars that make them up, over the years astronomers have used pictures to describe their meanings. Virgo is pictured as a woman holding a palm branch in her right hand (which means victory), and stalks of grain in her left hand (symbolizing seed). For example, the star making up her left hand is named Spica, which means seed.

Above Virgo and to the right – is the constellation Leo, which is the Lion.

The constellation Virgo is with us constantly, sometimes in the Northern skies, sometimes in the Southern skies. Sometimes she is standing upright, sometimes she is laying down. The other constellations move as well in relationship to Virgo. And the Planets of our Solar system also move in relation to her, such as Jupiter, shown in this picture. These movements act like a giant clock allowing us to tell the times we are living in when judged by prophecy.

Now, we are ready to examine the end-time prophesy of Revelation 12 – the seed of the woman. –

“And there appeared a great wonder in heaven; (1) a woman clothed with the sun, and (2) the moon under her feet, and (3) upon her head a crown of twelve stars:  And she (4) being with child cried, travailing in birth, and pained to be delivered”. – Revelation 12

Revelation 12 comes right after the conclusion of the seventh trumpet in the Book of Revelation.  With chapter 12, we fold back from that time to a picture of the overall war of Satan upon Israel and the Messiah. The woman is Israel and the twelve stars above her head are the twelve tribes of Israel. Paralleling Joseph’s dream, the moon and sun also represented his mother and father –

“And he dreamed yet another dream, and told it his brethren, and said, Behold, I have dreamed a dream more; and, behold, the sun and the moon and the eleven stars made obeisance to me.” – Genesis 37:10

and as we later learn in Revelation 12, the child is the Messiah. This sign plays out in the heavens on September 23, 2017 when the sun goes down in Israel. 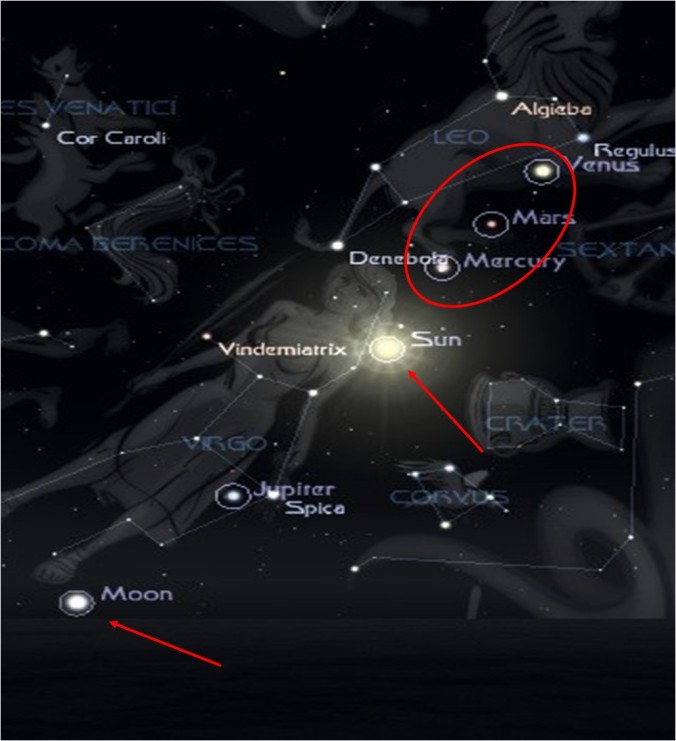 The sign of Revelation 12 has many details that individually are common, but uncommon when all put together. (1) The first part of the sign is the woman clothed with the sun. This happens every year, but it narrows the time down to one month around the autumnal equinox. That woman is represented by Virgo–the virgin. She is clothed by the sun from mid-September to early October. September 23, 2017 meets these requirements.

(2) The next requirement is that the moon must be under the feet of Virgo. With the sun in Virgo and her feet to the east, the moon must be a few days past new moon. Since the Hebrew Calendar is lunar and the Feast of Trumpets (September 21, 2017) is on the new moon, September 23-25 places the moon in the correct position. This happens every year on the Hebrew Calendar as long as the new moon did not occur too early or too late in relation to the equinox, which would put the sun too high or low in Virgo. Here it is perfect. The requirement of the moon and sun narrows it down to a few days of the year. The rest of the parts of the sign must then coincide with this time if we are able to observe this sign.

On September 23, 2017 there are four planets in the vicinity that complete the sign and its ultimate uniqueness. Mercury, Venus, Mars, and Jupiter play their parts. Above the head of Virgo is the constellation Leo. (3) In Leo at this time there will be Mars, Venus, and Mercury. With Leo being a constellation of nine principle stars, the three wandering stars make it twelve at this time. Thus the garland of twelve stars is upon the woman. For three planets to be in Leo at this time with all of the other preconditions makes this rare.

Combined with the final piece of the picture below is what makes this sign difficult of not nearly impossible to replicate anywhere close to the time in which we live. How rare? Many astronomers claim it has never before happened in history and will never happen again. 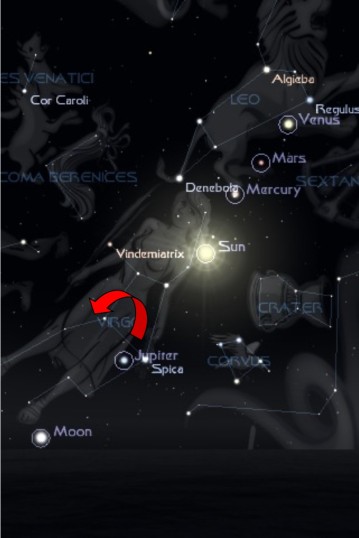 The final piece of the sign is Jupiter, which was known by the Jews as the planet of the Messiah, or King planet. Jupiter enters the sign of Virgo on November 20, 2016, which coincides with a close conjunction of Venus. The next such close conjunction with these two brightest planets is 49 years later. Jupiter itself enters Virgo about every 12 years.

Jupiter then spends those 293 days in Virgo. This is a day short of 42 weeks which meets the normal human gestation time of 37 to 42 weeks.

(4) As the sign of Revelation 12 comes into alignment on September 23, 2017, Jupiter is in the womb of Virgo and is about to be born. Remember, the meaning of Tribulation refers to the period of labor pains before birth. The world is going to go through a period of delivery to result in the Messianic Kingdom.

This sign speaks to those coming seven years–the last 3 1/2 of which will be the worst in human history. However, we have been warned and God will deliver those who have put their trust in Christ. Whether it is by a rapture or by God’s shielding, Jesus promises to “never leave us and will be with us to the end”.

I will conclude this teaching in Sign of the Ages part 2. In it I will discuss the sign of the Great Red Dragon and possible time scenarios.

Note: I would like to thank Daniel W. Matson of Signs of the End and William Frederick of The End Times Forecaster for their excellent research and Bible study on this topic.