This period of time has had an abundance of heavenly signs; solar flares, strange sounds in the air, near misses by comets like the comet Ison, mass die-offs of birds-fish-and animals, great increase in earthquakes and volcano activity, and a very rare Blood Red Moon Tetrad occurring of Jewish Holidays in 2014 and 2015. What little has been reported has quickly been forgotten. But, I want to refresh your memories and remind you that God does these things to remind us of our sins and warn us to get right with Him before it is too late.

My last article dealt with the Revelation 12 Sign of the Woman which will be complete on September 23, 2017. But, that sign doesn’t end there, it continues on into 2024 where the return of Messiah Jesus is predicted. As we approach that time, life is really going to get exciting for the believer as we are going to be thrust into hand-to-hand combat with the devil and his forces so to speak. War in the heavens is going to break out –

It may have already begun as the following video shows.

Whether this video was just some anomaly or it captured what is happening spiritually, we know the warfare is real and we know the outcome – Satan is cast out of heaven to the earth –

“And the great dragon was cast out, that old serpent, called the Devil, and Satan, which deceiveth the whole world: he was cast out into the earth, and his angels were cast out with him.” – Revelation 12:9 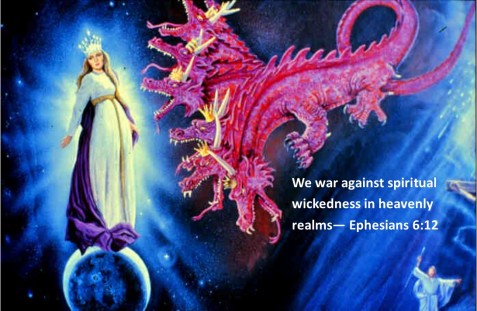 “And when the dragon saw that he was cast unto the earth, he persecuted the woman which brought forth the man child. And to the woman were given two wings of a great eagle, that she might fly into the wilderness, into her place, where she is nourished for a time, and times, and half a time, from the face of the serpent.” – Revelation 12:13,14

“And the dragon was wroth with the woman, and went to make war with the remnant of her seed, which keep the commandments of God, and have the testimony of Jesus Christ.” – Revelation 12:17

When he can’t destroy the woman, he will turn against her seed, those who have the testimony of Jesus – in other words true Christians. If you are a Christian you will need to be full of the Spirit of God for this battle –

“And they overcame him by the blood of the Lamb, and by the word of their testimony; and they loved not their lives unto the death.” – Revelation 12:11

These earthly and heavenly signs all point to this coming spiritual war in the heavens and on the earth. I pray we are all ready for it. Now is the time for all, like good soldiers, to separate themselves from worldly passions and cares and give ourselves  to God and His plans. Now is the time to renew your vows to God and to be equipped with His Spirit and His armor –

“Wherefore take unto you the whole armor of God, that ye may be able to withstand in the evil day, and having done all, to stand. Stand therefore, having your loins girt about with truth, and having on the breastplate of righteousness; And your feet shod with the preparation of the gospel of peace; Above all, taking the shield of faith, wherewith ye shall be able to quench all the fiery darts of the wicked. And take the helmet of salvation, and the sword of the Spirit, which is the word of God: Praying always with all prayer and supplication in the Spirit, and watching thereunto with all perseverance and supplication for all saints;” – Ephesians 6:13-18

2 thoughts on “These are the Days”