In the last decade we have had prophetic warnings to believers, signs in the heavens warning of end-time events soon approaching, strange sounds in the atmosphere and in the earth, unexplained mass die-offs of birds, fish, and animals all around the earth.

In my 80 years, I do not remember such an abundance of signs and warnings given to mankind to get ready to meet God. The heavenly signs of Revelation 12 is a clear warning that the final 7 years of Satan’s war against mankind is very near, and it may well begin September 23, 2017, just seven months away. Whether these warnings are predicting exact dates or just alerting us to soon coming events, one thing should be clear – the time is short.

Our Christian brothers and sisters are being martyred for their faith all over the world, estimated to be 90,000 this year. But, what do we find in the United States? Pleasure seekers attending Oscar awards rewarding those who despise and mock the name of Jesus Christ. Giving honors to a Muslim who refuses to attend because his country, Iran, is disrespected! Iran, a country that kills and jails its own citizens because they convert to Christianity or express their faith in Jesus. A country that funds terrorists around the world who kill Christians!  And he dares to chastise us for not being free! And there were so-called Christians there applauding his surrogate speech! But what is worse, there are Christians who pay to see the garbage these purveyors of filth put out.

Then there are Democrats, once a party that professed Christ, now attending Town Hall meetings shouting down the opening prayers of Republican Representatives, even cursing the Name of Jesus! Or they are marching in the streets on behalf of abortion or homosexual and transgender lifestyles displaying their communist signs which declare they don’t want our Christian Standards. The Democrat Party just elected a Muslim as 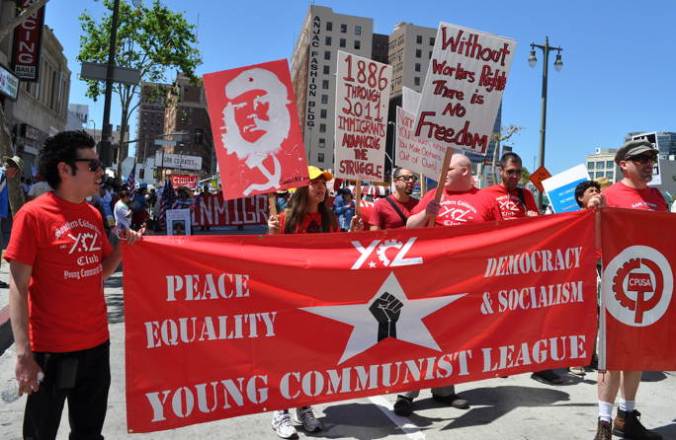 their deputy chair knowing that Muslims are dedicated to making Islam the only religion on earth and they want Sharia law, which is against all the Constitution stands for. If there are Democrats out there that still love the Lord Jesus, they are hidden and do not let their light shine! The Democrat Party is fulfilling the word of the Lord through Paul –

“and with all unrighteous deception among those who perish, because they did not receive the love of the truth, that they might be saved. And for this reason God will send them strong delusion, that they should believe the lie, that they all may be condemned who did not believe the truth but had pleasure in unrighteousness.” – 2 Thessalonians 2:10-12

We also have the American Church, much of which is more concerned with income and prestige than with declaring the truth. The Catholic church sends out a paper to its members that it is alright to vote for those politicians that espouse abortion, as long as they don’t believe in abortion. Well, I have news! If you knowingly vote for those who are promoting abortion, homosexuality, or transgenderism – you are guilty as well and it will keep you out of heaven! It does no good to have light if you hide it under a bushel! And if your salt has lost its saltiness, it is good for nothing!

Jesus said, “For I say unto you, That except your righteousness shall exceed the righteousness of the scribes and Pharisees, ye shall in no case enter into the kingdom of heaven.” – Matthew 5:20

God is weighing us in the balance and we are in danger of being found wanting! It is not enough to talk Christian, you have to act Christian! God states, He hates divorce, He hates murder of the innocent (which is abortion), and He created marriage to be between a man and a woman. One can only claim the name Christian if he obeys the word of the  Lord. Jesus made that very clear –

“He who has My commandments and keeps them, it is he who loves Me. And he who loves Me will be loved by My Father, and I will love him and manifest Myself to him.” – John 14:21

We are coming close to perilous times as Paul wrote about (2 Tim. 3:1) and only those who determine to keep the word of God will be able to stand.