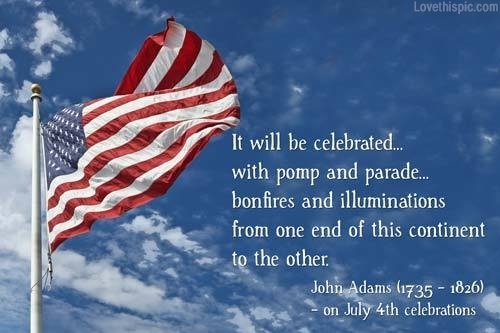 “The second day of July, 1776, will be the most memorable epoch in the history of America. I am apt to believe that it will be celebrated by succeeding generations as the great anniversary Festival. It ought to be commemorated, as the Day of Deliverance, by solemn acts of devotion to God Almighty. It ought to be solemnized with pomp and parade, with shows, games, sports, guns, bells, bonfires and illuminations, from one end of this continent to the other, from this time forward forever.” John Adams, 2nd President of the United States

While I am glad to be an American, I am worried by the things I see and hear in our popular culture. It seems to me that few have an appreciation for the 4th of July beyond it being an excuse for partying and getting a day off work. The 4th of July represented to those who saw it’s birth as “the Day of Deliverance” from tyranny and oppression. It’s roots were in the spiritual – the oppression of sin. They understood what their Savior uttered some 2000 years ago – “Therefore if the Son makes you free, you shall be free indeed.” And they understood that it had to be true in their personal lives before it could be true in their corporate lives.

Jesus answered them, “Most assuredly, I say to you, whoever commits sin is a slave of sin.” – John 8:34

In the congress that brought forth the Constitution, there were differing opinions and disagreements but, they had something our Congress today does not seem to have – a Christian world-view. Listen to John Adams assessment – 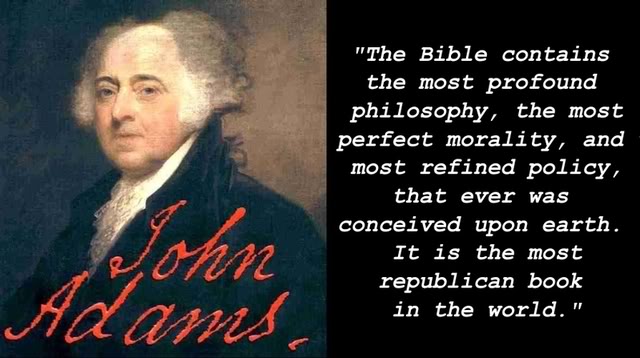 “Now I will avow, that I then believe, and now believe, that those general Principles of Christianity, are as eternal and immutable, as the Existence and Attributes of God; and that those Principles of Liberty, are as unalterable as human Nature and our terrestrial, mundane System.” – Adams wrote this on June 28, 1813

Perhaps if today’s Congress could put aside selfish partisan bickering and put the people they were elected to represent ahead of their own petty ambitions, something good could be done for the country. Most of the Congress seems to be more concerned with their own re-election than with truth. But, as Adams stated so eloquently, “the only Principles in which that beautiful Assembly of young Gentlemen could Unite” … were “the general Principles of Christianity.”

One of the early American educators was Noah Webster, who published the first American Dictionary in 1828. Here is what he said about politics – 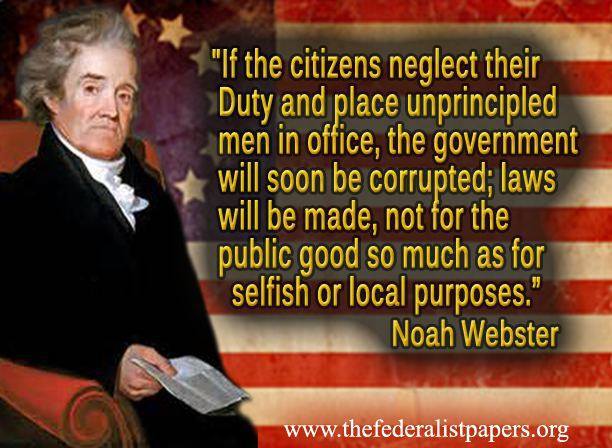 Now, I know there are those reading this that may not be American but, the principles are the same – a Christian world-view in government brings forth freedom for the people. That is why I am praying for revival in America and a return to our Christian roots. Notice I did not say a return to the Christian religion, which quite often is apostate, lukewarm, or dead  itself! True Christianity is about a personal revelation that results in a personal reformation of thought and action that is line with Biblical teaching. It is not sold out to the world. When these kind of people elect like-minded representatives to government, the result will be liberty and prosperity.

I wish you all a blessed 4th of July and all it means – freedom from the tyranny of sin which eventually will lead to true liberty and prosperity. If you remember what Noah Webster wrote, it can also lead to good government.