You might wonder how a largely Christian nation such as the United States could fall to such depths as to actually worship this Beast but, I remember how in my early life a nation that was once known as a Christian nation surrendered to Hitler, who was an illustration of Antichrist – in fact many Christians of the time thought he was!

He solved their economic problems, capitalized on national pride, controlled their education system reteaching what were foundation truths, manipulated the news media to the point it became simply a propaganda machine for the National Socialist German Workers’ Party, Hitler’s party. If there were any remaining problems he used the Jews as scapegoats.

How far are we from this scenario now? Most of Europe has forsaken their Christian heritage and embraced socialism and are ripe for a charismatic leader with answers to come on the scene. One of the Eu leaders in Brussels has stated – “If someone could solve our economic problems, I would embrace him, be he saint or devil!” For all who are enamored with left-leaning socialists, remember socialism fathered both Nazi fascism and Communism.

The United States is under full-scale attack by demonic driven forces now pushing 1) liberal education which denies our Christian roots, 2) a brand of feminism that denies the foundational principle of marriage being between man and woman joined by God, 3) a political philosophy that denies personal responsibility and encourages dependence on the government (don’t forget – a government that can give you everything can also take everything!), 4) Democrats are the chief proponents of this philosophy although some Republicans also use it as a means of control, and 5) a news media that is as much a propaganda machine as Hitler ever had! As Isaiah wrote about our times –

“And judgment is turned away backward, and justice standeth afar off: for truth is fallen in the street, and equity cannot enter.” – Isaiah 59:14 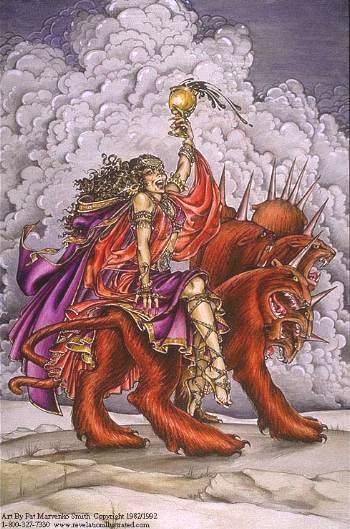 Aiding all these things is a false church every bit as wicked as Jezebel of Thyatira. It embraces women exercising authority over men, embraces homosexuality even allowing them to act as pastors (which is like setting up an abomination before the Throne of God), and refuses to preach the whole counsel of God contained in Scripture. They have “changed times and laws” from the Hebrew roots God gave to the original Church. Why would anyone be surprised when the Antichrist appears and does the same things?

“And it was given unto him to make war with the saints, and to overcome them: and power was given him over all kindreds, and tongues, and nations.” – Rev. 13:7

Satan’s attack will be subtle, constant, and on many fronts. He will attack with the economy, TV programming will be filled with violence, immorality and discouragement, news media will highlight ‘bad news’, attack anyone disagreeing with them, and be generally ‘fear mongering’. The public schools will be turning your children against you teaching that you are ‘old fashioned’ and they will use evolution to disprove the Bible, even though there is no proof that evolution exists as they teach it. The government will enact laws that discourage Christians from living their faith publicly driving them underground. These things are already happening in Canada and beginning in the United States as well.

“And there was given unto him a mouth speaking great things and blasphemies; and power was given unto him to continue forty and two months. And he opened his mouth in blasphemy against God, to blaspheme his name, and his tabernacle, and them that dwell in heaven.” – Rev. 5, 6

As we saw in Revelation 12, Satan will be thrown to earth which is when he will fulfill these verses. He will set up the Abomination that makes Desolate in the rebuilt Temple in Jerusalem. He will be furious at the angels of heaven but, helpless to do anything about them so, he will go after the ‘woman’, who is Israel, who will be made safe in the ‘sheepfold’ of the wilderness which God has prepared for her. Thwarted again, he will go after those who hold the testimony of Jesus but they also will “overcome him by the blood of the Lamb, the word of their testimony, and they loved not their lives until the death”!

Oh, what victory – the “kingdom of God” is about to be established on the earth! But, the devil is not done yet! He will bring the “false prophet”, the 2nd beast, on the scene to deceive the very saints of God.

“And all that dwell upon the earth shall worship him, whose names are not written in the book of life of the Lamb slain from the foundation of the world.” – Rev. 13:8

The time is so short. I urge all to make sure their name is in the Lamb’s book of life. Anyone can be saved as Scripture declares “And it shall come to pass, that whosoever shall call on the name of the Lord shall be saved.” – Acts 2:21.

In the next article, I will introduce the False Prophet.