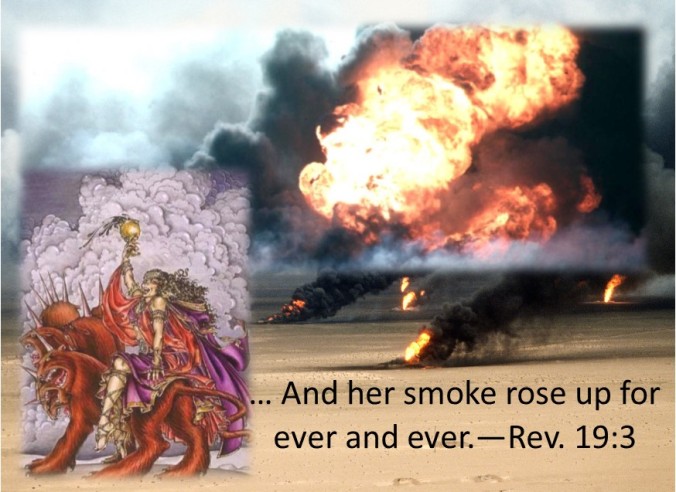 “And after these things I heard a great voice of much people in heaven, saying, Alleluia; Salvation, and glory, and honour, and power, unto the Lord our God: For true and righteous are his judgments: for he hath judged the great whore, which did corrupt the earth with her fornication, and hath avenged the blood of his servants at her hand.” – Rev. 19:1-2

In Revelation chapter 19 we are given a preview of the judgment of Mystery Babylon, the false church, the Great Whore. There is great rejoicing in seen in heaven because this false religious system has persecuted true believers since the beginning of time, starting with Cain and Abel. Her deceptions have robbed many people of the blessings God had planned for them, blocking the way that leads to life but refusing to go in herself.

“Thus saith the LORD, Stand ye in the ways, and see, and ask for the old paths, where is the good way, and walk therein, and ye shall find rest for your souls. But they said, We will not walk therein.” – Jer. 6:16

The priests, pastors and leaders, those who should have opened the Way to the people, shut up the kingdom by their own man-made laws and regulations. They refused to go in themselves and they blocked and persecuted any who tried to go in. For years the Catholic Church declared that only the priests could rightly interpret the Word of God discouraging the people from reading it, and many other denominations did this as well. They existed in Jesus’ time as well and He rebuked them strongly –

“But woe to you, scribes and Pharisees, hypocrites! For you shut up the kingdom of heaven against men; for you neither go in yourselves, nor do you allow those who are entering to go in.” – Matt. 23:13

As John sees her judgment, she no longer looks so grand and as Scripture declares, “her smoke rose up forever and ever.” All those who did not heed God’s call to “come out of her My people”, given in the chapter 18, suffered with her. She “rides the beast” enjoying the prestige and power the world can give but, in the end the final 10 horn kingdom of the beast will turn on her and destroy her.

“And the ten horns which thou sawest upon the beast, these shall hate the whore, and shall make her desolate and naked, and shall eat her flesh, and burn her with fire.” – Rev. 17:16

She thought she could accomodate the world, going along with it and gain from it. But, appeasement with evil never works, it will eventually destroy you. This is true personally or corporately! When a government tries to ignore or appease an evil government, as Chamberlain did Hitler, the evil simply grows stronger until it destroys you. I’m sure there are Democrat Congressmen who do not agree with abortion but they have sold their morals for a “pot of porridge”, so to speak, as Esau of old did. And many Republican lawmakers declared they would get rid of Planned Parenthood or the Obama healthcare plan if elected but, when the possibility was presented to do just that, they procrastinated and did not want to pay the price for their stand against evil. And if we the voters do not remember this this next election, then we are as guilty as them!

But, as these Scriptures show, God does not forget, and His Judgment is swift and sure and not obscured by many procedural votes and public statements as these politicians use to hide their true actions. 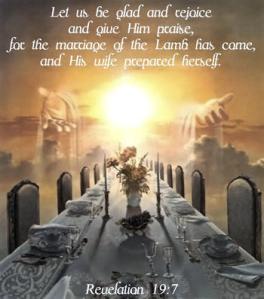 Revelation 19 now shifts from a scene of judgment to one of great rejoicing as heaven prepares for the Marriage of the Lamb!

“And a voice came out of the throne, saying, Praise our God, all ye his servants, and ye that fear him, both small and great. And I heard as it were the voice of a great multitude, and as the voice of many waters, and as the voice of mighty thunderings, saying, Alleluia: for the Lord God omnipotent reigneth. Let us be glad and rejoice, and give honour to him: for the marriage of the Lamb is come, and his wife hath made herself ready.“ – Rev. 19:5-7

The Bride hath made herself ready and as a result, “to her was granted that she should be arrayed in fine linen, clean and white: for the fine linen is the righteousness of saints.” While we are saved by faith, and that not of ourselves, as Paul declared, that does not mean we have no work to do. Paul also wrote –

“Wherefore, my beloved, as ye have always obeyed, not as in my presence only, but now much more in my absence, work out your own salvation with fear and trembling.” – Phil. 2:12

The fine linen she is arrayed in is the righteousness of saints. In other words, you cannot live like the devil and expect to be called  righteous. We all must choose to stand against evil, in every form.

KING OF KINGS, AND LORD OF LORDS

“And I saw heaven opened, and behold a white horse; and he that sat upon him was called Faithful and True, and in righteousness he doth judge and make war. His eyes were as a flame of fire, and on his head were many crowns; and he had a name written, that no man knew, but he himself. And he was clothed with a vesture dipped in blood: and his name is called The Word of God. And the armies which were in heaven followed him upon white horses, clothed in fine linen, white and clean. And out of his mouth goeth a sharp sword, that with it he should smite the nations: and he shall rule them with a rod of iron: and he treadeth the winepress of the fierceness and wrath of Almighty God.” – Rev. 19:11

He is obviously marching to war against the Antichrist armies that gather at Armageddon seen in the 6th angel in Revelation 16.

“For they are the spirits of devils, working miracles, which go forth unto the kings of the earth and of the whole world, to gather them to the battle of that great day of God Almighty. Behold, I come as a thief. Blessed is he that watcheth, and keepeth his garments, lest he walk naked, and they see his shame. And he gathered them together into a place called in the Hebrew tongue Armageddon.“ – Rev. 16:14-16

“And Enoch also, the seventh from Adam, prophesied of these, saying, Behold, the Lord cometh with ten thousands of his saints” – Jude 1:14

We are not told who these armies of heaven are but, it seems likely to me that they are the redeemed from earth who are now in heaven. Enoch called them ‘saints’ and Revelation described them ‘clothed in fine linen, white and clean’ and further declares that ‘fine linen is the righteousness of saints’. God honors them by allowing them to be part of the final defeat of the Devil, the Antichrist, and the False Prophet and their armies.

Finally, chapter 19 describes the conclusion of the great battle of Armageddon as the Antichrist and the False Prophet are thrown into the lake of fire and brimstone –

“And the beast was taken, and with him the false prophet that wrought miracles before him, with which he deceived them that had received the mark of the beast, and them that worshipped his image. These both were cast alive into a lake of fire burning with brimstone.” – Rev. 19:20

While the Beast’s armies are slain, their final judgment awaits the Great White Throne judgment that will come later. Those who followed the Lord and did not give in to the Antichrist will now be rewarded with the 1000 year reign with Christ to be described in Revelation chapter 20.

All the events described in chapters 14 through 19 are taking place at the end of the 3 ½ years of the great tribulation, during which Satan and his Antichrist try to destroy Israel and the Church on earth. They happen rapidly and sometimes they overlap each other.

Many today scoff at these pictures. They have had their spirits dulled by too many fantasy pictures such as Harry Potter, and other science fiction stories to believe God could actually do these things. But, perhaps that is the deception of the devil purposely deadening their senses by overloading them. It has worked for him before, many times. Even in the Bible many had a hard time believing Jesus was coming back, saying –

“And saying, Where is the promise of his coming? for since the fathers fell asleep, all things continue as they were from the beginning of the creation.” – 2 Pet. 3:4

Peter called them ‘scoffers who walk after their own lusts’ and likened them to the scoffers of Noah’s day who after 120 years of Noah’s warnings and were suddenly lost in the great flood.

Remember, Jesus said every Scripture is true and will happen, whether we understand it or not. May your believe grow stronger than your mind.