As many of the end-time events are described in the Book of Revelation, I put forth this series, named Revelation for Beginners. In this series, I only attempt to present an outline of the events described. I hope and pray it is enough to encourage you to continue studying the Book of Revelation. Many, over the years, have presented their theories and understandings about these events and I do not wish to prove or disprove any of them  but instead present a straightforward outline of events described. Before beginning this article, I will present a movie of basic comparisons between the Seals, the Trumps, and the Bowls of Wrath which Revelation presents. In this article, I have not included the letters to the seven churches Jesus dictated or the judgment on the great whore of Babylon, which I have covered in other Revelation postings. After the movie I will give more information I hope will be helpful.

We will begin with the Seals which only the Lamb of God could open. The chart below outlines these seals –

The first four seals have often been called The Four Horsemen of the Apocalypse and they represent the cause and the ultimate outcome of war. Wars begin because of the desire of some to control others or take what they have, but the outcome is always famine, destruction, inflation, and death. It is man’s legacy ever since his beginning and is clearly seen in the story of Cain and Abel. But since Revelation shows Jesus, the Lamb of God, opening the seals, I think it is showing man’s history since Jesus’ first coming. He taught that the end-times would be like birth pangs, getting closer together and stronger, and that would certainly be true of the first four seals.

The 5th seal portrays persecution of God’s saints. While there has always been persecution, both before the time of Jesus and after, this seal represents the increase of persecution. Even Jewish Rabbis are complaining about the persecution of Christians and wondering why no one seems to care. One Rabbi wrote –

“The Centre for the Study of Global Christianity in the United States estimates that 100,000 Christians now die every year, targeted because of their faith – that is 11 every hour. The Pew Research Center says that hostility to religion reached a new high in 2012, when Christians faced some form of discrimination in 139 countries, almost three-quarters of the world’s nations.”

When you take into account the more subtle persecution, the amount is overwhelming. For example, former presidential candidate Mike Huckabee recently complained – ‘Why can Facebook and Twitter take down my Christian testimony but they can’t seem to take down terrorist propaganda?’ Plus it seems every wacko in America has the right to free speech and to discriminate but a Christian bakker doesn’t have the right to not decorate artful cakes for homosexuals!

The 6th seal opens a period of cataclysmic actions on earth beginning with great earthquakes. There also will be great signs in the heavens (I have written about some of them) and threatened disasters that drive men underground. It will also signal the closing of the age when God’s wrath is beginning to be poured out. Well, the signs are here! Nations all around the world, including the U.S., are building underground bunkers and even cities – why? Do they know something the rest of us don’t know? Or do they just think they do? The 6th seal clearly gives us the way to prepare – get right with God so you don’t deserve His wrath!

As the 7th seal is opened there is silence in heaven as God struggles with love and justice. The prayers of saints who mourn the necessity of the coming judgment flow up to God as seven angels prepare to sound their trumpets.

The first four trumpets usher in physical disasters on earth and in the heavens. Mankind’s humanistic foundations will be shaken to the core. Because these trumpets only begin after the 7th seal is opened, I believe they describe events that happen toward the end of time. It is possible they do not happen all at once but, over a period of time. A look at Google verifies that the earth’s trees have indeed been under attack; the Black Forest of Germany is dying, the Amazon forests are being destroyed, and many trees are 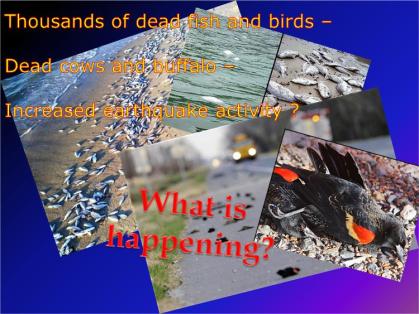 under serious danger from pollution and man’s unwise management. Fish in the oceans are suffering mass die-offs since 2010 and WWI and WWII saw about 1/3 ships destroyed. Most remember Chernobyl (translated Wormwood) which spread radiation around the world. Are these possible fulfillments? Or is something worse coming?

The 5th angel unlocks the Bottomless Pit, releasing demonic activity of new proportions. Have you noticed how quickly the world, including the United States, is moving toward demonic inspired themes? Today, homosexuality, transgenderism, killing the innocent babies and selling their body parts are thought of as enlightened lifestyles. Divorce, remarriage, and adultery are no longer viewed as immoral. TV ads showing young women worried about if they took their abortion pill or not – then they remember with a sigh of relief – they have an aborting implant. There is not a thought that fornication and adultery will put them on a path to hell! These and many more abnormal actions, which would have been shocking 100 years ago, now seem not so unusual. But what is worse, the Beast who will inspire the last of man’s empire on earth will emerge. He will be the Antichrist. Since he is shown coming out of the Bottomless Pit, does this hint that he will be a nephilim, half human and half demon? Jesus hinted at this when he declared these last days would be as they were in Noah’s day, a time when nephilim roamed the earth.

“That the sons of God saw the daughters of men that they were fair; and they took them wives of all which they chose. … There were giants (nĕphiyl) in the earth in those days; and also after that, when the sons of God came in unto the daughters of men, and they bare children to them, the same became mighty men which were of old, men of renown. And GOD saw that the wickedness of man was great in the earth, and that every imagination of the thoughts of his heart was only evil continually.” – Gen 6:2-5

The Antichrist will lead a 10 part nation that will eventually try to destroy Israel and true Christians from the earth. I have written about this in The Bozrah Deliverance. He will instigate what Jesus called the great tribulation. Under his short reign the armies of the world will gather at a place called Armageddon and march against Jerusalem. At the end of this 3 ½ year period of time Jesus will return the second time to reclaim the earth. As the 5th Angel was the 1st Woe to the earth, the 6th Angel begins immediately to bring forth the 2nd Woe, the ending of which will initiate God’s Bowls of Wrath being poured out on the Beast and all who follow him. But before this 6th angel finishes his work, there

are several other events that take place. The Temple must be rebuilt in Jerusalem in order for the Beast to set up his Abomination of Desolation. While we are not told exactly when this happens, I think it is possible that it is part of the 7 year covenant he makes with Israel, or perhaps the Psalm 83 war, or Ezekiel 38 war take place and remove any Muslim opposition to it.

Also two witnesses come forth to challenge all not to follow 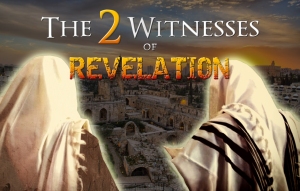 Antichrist and to turn back to God and His Messiah. They will testify for 3 ½ years and the whole world will know of them and their message. At the end of 3 ½ years the Antichrist will kill them, probably at the same time that he sets up the Abomination in the Temple. In amazement the whole world will witness their resurrection and rize into the heavens. Then will begin the last 3 ½ years of Tribulation for the world and the saints. The scene is now set for the Angels who have the Bowls of God’s wrath to be poured out on the Beast and the wicked who follow him. 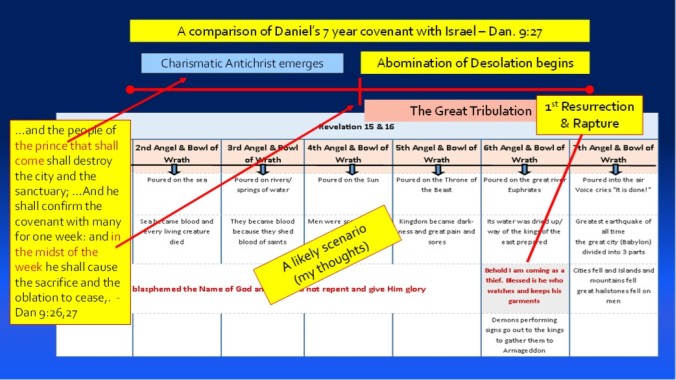 I will not add much to these last Angels, except to say I believe the time of their ministry is at the very last and it happens very fast. Daniel’s 70 week prophecy is being played out, the Beast and his followers suffer the wrath of God while Israel flees into the wilderness (Rev. 12:6) and Christians who are yet alive suffer the wrath of Antichrist and the False Prophet as they stand against them (Rev. 12:11,17). As the last Angel prepares to sound, Jesus and all the resurrected and raptured saints return to destroy the Antichrist and his armies gathered at Armageddon and Jerusalem. The Devil is chained and cast into the Bottomless pit, to remain for 1000 years, while Christ reigns on earth.

This has been my interpretation of events described in Revelation. You may see things differently, and that is fine as long as you continue to study them. As we get closer to the end, Jesus will make things clearer to all who “love His appearing”.