We watched the eclipse yesterday. In our location only about 75% of the Sun was eclipsed but, it was interesting to watch. But, what is more interesting is thinking about what it may mean? This eclipse was called ‘the great American eclipse’ because it is the first total solar eclipse that could only be seen in the United States, and no other country. It was also the only total eclipse seen only in the USA since it’s founding in 1776.

While this eclipse traveled from the Northwest to the Southeast, in just 7 years another eclipse will cross the US from Northeast to Southwest which is very unusual. Some have wondered about the crossing point being right over the famous Madrid fault line in the Mississippi Valley. 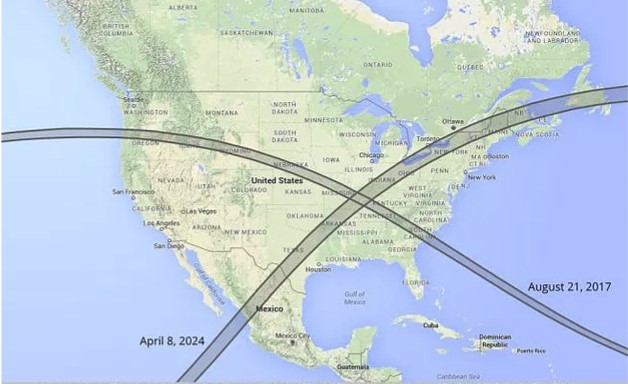 Sort of an x marks the spot. But, perhaps it’s not an “x’. ‘The last letter in the Hebrew

alphabet is “tav” and it means “truth” and has the meaning in Hebrew that was given to its symbol as: “mark, sign,covenant.” The original ancient letter looks like this:’ (comment taken from Ready and Watching blog).

It is also noteworthy that this second eclipse takes place 7 years after this current eclipse. Also, remember in my posting about the Revelation 12 great sign in the heavens, which will take place Sept. 23, 2017 (just a month away), there was also a 7 year period of time revealed (shown in the above movie).  These 7 yr periods match what the prophet Daniel said about the “prince that will come” and confirm a 7 year covenant with Israel. He will break it in the middle by setting up the abomination of desolation and thus will begin what Jesus call “great tribulation“.

“And after threescore and two weeks shall Messiah be cut off, but not for himself: and the people of the prince that shall come shall destroy the city and the sanctuary; and the end thereof shall be with a flood, and unto the end of the war desolations are determined. And he shall confirm the covenant with many for one week: and in the midst of the week he shall cause the sacrifice and the oblation to cease, and for the overspreading of abominations he shall make it desolate, even until the consummation, and that determined shall be poured upon the desolate.” – Daniel 9:26,27

“For then shall be great tribulation, such as was not since the beginning of the world to this time, no, nor ever shall be.” – Matt. 24:21

God seems to be sending many signs from Blood Red Moon Tetrads and eclipses to strange signs about the number 7, even one revealed in cattle!

It’s been noted that the United States is the wealthiest, most powerful, and most influential Gentile nation. It is also the world’s ethnic melting pot and hosts a proto-world government in the form of the United Nations. In Jewish tradition, Lunar eclipses (blood moons) are omens for Israel whereas solar eclipses are omens for the Gentiles. The 4 Blood Moons in 2014-15 were the first in 2000 years that a Tetrad of four Blood Moons occurred all on Jewish feast days and in a Shemitah (sabbatical) Year! An unprecedented event. It is quite possible that in 2014-15 the Blood Moons were the Omens for Israel and now in 2017 the Solar Eclipses are the Omens for the Gentiles. The 7 year Tribulation is also known as the Day of the LORD when God enters into judgment with the Gentile nations. The fact that two total solar eclipses, spaced seven years apart, cross the entirety of the contiguous United States, and form an ‘x’ over the chief Gentile nation on earth should give you pause.

The eclipse on August 21st is also exactly 40 days from Yom Kippur (The Day of Atonement) which is on September 29th. “40” represents a period of testing in the Bible as can been seen in the 40 years the Israelites wandered in the wilderness and the 40 days Jesus was tested in the wilderness. This 40 day period leading up to Yom Kippur is more than random. In fact, this period of time beginning on August 21st is called the Season of Teshuvah, which in the Jewish faith is a time to get right with God before judgment falls on the Day of Atonement.

One last sign concerns the sign of Virgo which was shown in the above movie and will be fulfilled September 23, 2017. At that same time all the planets in our solar system will be in perfect alignment for the first time in 7000 years.

“And there shall be signs in the sun, and in the moon, and in the stars; and upon the earth distress of nations, with perplexity; the sea and the waves roaring; … And when these things begin to come to pass, then look up, and lift up your heads; for your redemption draweth nigh.” – Luke 21:25-28

God, who created the heavens and the earth, is speaking to us in signs and prophesy. Will you be like the men of Issachar who understood their times?

“And of the children of Issachar, which were men that had understanding of the times, to know what Israel ought to do;” – 1 Chronicles 12:32