The Church of Pergamum was known as the ‘compromising church’ because it tried to mix worldliness with righteousness. It can’t be done – in the end they would lose both! I begin this article with the video on Pergamum –

When the Greek successor of Alexander the Great, Antiochus IV Epiphanes,  invaded Israel he took over the Temple and desecrated it by erecting an altar to Zeus. He even sacrificed a pig on the altar. It was forever after referred to as the “abomination of desolation”. 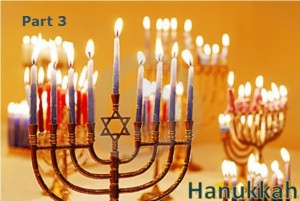 This led to what is known as the Maccabean revolt and the cleansing of the Temple. This re-dedication is commemorated in the Feast of Dedication, which we call Hanukkah , and marks the Jewish New Year.

A second similar event occurred in 130 AD by the Roman Hadrian, which  involved the visit of the Roman Emperor Hadrian to the ruins of the Jewish Temple in Jerusalem, which was destroyed in 70 AD by Titus. At first sympathetic towards the Jews, Hadrian promised to rebuild the Temple,  but the Jews felt betrayed when they found out that he intended to build a temple dedicated to Jupiter (the Roman version of Zeus) upon the ruins of the Second Temple. The resulting Jewish revolt led to the expulsion of all Jews from Jerusalem, the renaming of Israel to Palestine (Roman for Philistine), prohibiting the Torah law and the Hebrew calendar, and destroying the association of Jews to Judea and forbidding the practice of Jewish faith. This is history but, prophetically, Jesus predicted it would happen once more –

“When ye therefore shall see the abomination of desolation, spoken of by Daniel the prophet, stand in the holy place, (whoso readeth, let him understand:)” – Matthew 24:15

Now to the question of what is Satan’s throne? When Hadrian built an altar to Jupiter on the Temple mount, a copy of it was built in Pergamum because it was the center of emperor worship at that time. Only they called it the throne of Zeus. After Rome became Christian under Emperor Constantine, the altar fell into disuse and was gradually covered 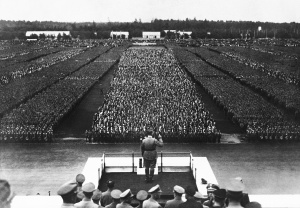 by the sands of time. Eventually, it was re-discovered in the early 1900’s by a German  archaeologist and moved to Berlin, where it was reassembled and made into a museum. In 1930, Hitler’s architect, Albert Speer, designed a copy of it in Nuremberg where Hitler announced his famous ‘final solution’ to the Jewish problem. There is no doubt that Satan dwelt there when Hitler tried to destroy the Jewish people. 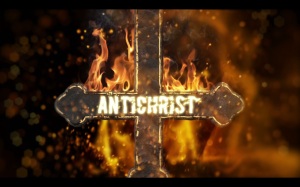 When Jesus dictated this Revelation letter to John, Satan’s throne was literally in Pergamum. But in the 1930’s it was moved to Germany, and I believe it will be found somewhere in Europe at the end of the age (right now it is in Germany). One thing is sure however, wherever persecution and hatred of God’s people are found, Satan dwells there.

Now, what lessons are to be found in this letter?

First, whenever the church becomes cosy with the world, it loses. Pergamum had its Balaams and so do we today. Balaam tried to weaken Israel by introducing pagan ideas such as idolatry and illicit sex.

Idolatry is anything that takes the place of or is put before God. Americans have set aside one day above all to worship the God of the Bible – Sunday which is the Lord’s Day, because that is the day He rose from the dead. When I was a boy, it was by in large set aside; stores were not open, even bars were not open. Schools, colleges, and their games dared not transgress this day. All that has gone by the wayside now as sports are a new god in America. Stores are open also as the god of money must be fed and is spurred on by greed.

Hollywood is a ‘mega Balaam’ not only polluting America with illicit sex but, the entire world! Foolish Americans set its stars up as idols rewarding them with wealth not realizing that they are directly destroying the American family and ultimately America itself. As of late, these clay idols have taken to making political pronouncements as if they had any wisdom worth having! The entertainment they offer is just as deadly as the opiate addiction presently sweeping the land. If revival does come to America, as I am praying does, Hollywood would be among the first to go, as there is no agreement between Hollywood and heaven. I might also add – BEWARE OF ANY POLITICIANS THAT GO TO HOLLYWOOD FOR THEIR SUPPORT!

Second, guard the family! The family is sacred to God and it is the foundation of everything therefore Satan wants to destroy it any way he can. This same spirit is at work in the Church today. Rampant divorce and remarriage amounts to the same problem Pergamum had. Jesus likens it to adultery.

“But from the beginning of the creation, God made them male and female (no transgenders). For this reason a man shall leave his father and mother and be joined to his wife. And the two shall become one flesh; so then they are no longer two but one flesh. Therefore what God has joined together, let not man separate. In the house His disciples also asked Him again about the same matter. So He said to them, whoever divorces his wife and marries another commits adultery against her. And if a woman divorces her husband and marries another, she commits adultery.” – Mark 10:2-12

“Because lawlessness (wickedness) will abound, the love of many will grow cold. But he who endures to the end will be saved.” – Matthew 24:12-13

The best approach is to teach God’s standards and live by them. Then believers should not be yoked to unbelievers. Don’t rely on the hope that you will change them after marriage. Why hope that God will honor your prayers after you have rebelled and disobeyed Him? I do not say these things in a legalistic way. The only way to bring peace and stability into our lives is to obey God’s rules for living.

The main lesson of the church in Pergamum is “don’t compromise with the world (the devil) on any level. It only opens the door to the devil and he will come in.”