Many shy away from prophecy because they have trouble understanding it but, that is not God’s fault. God only reveals His mysteries to those who are serious about searching them out and their hidden message is usually revealed in some other scripture.

The New Testament declares all the redeemed are to be “kings and priests” to our God so, it is part of our honor to search out prophecy. In this article, I will present how this worked recently for me while reading in the book of Isaiah.

“Behold, the LORD’S hand is not shortened, that it cannot save; neither his ear heavy, that it cannot hear: But your iniquities have separated between you and your God, and your sins have hid his face from you, that he will not hear. For your hands are defiled with blood, and your fingers with iniquity; your lips have spoken lies, your tongue hath muttered perverseness. None calleth for justice, nor any pleadeth for truth: they trust in vanity, and speak lies; they conceive mischief, and bring forth iniquity. … And judgment is turned away backward, and justice standeth afar off: for truth is fallen in the street, and equity cannot enter. Yea, truth faileth; and he that departeth from evil maketh himself a prey: and the LORD saw it, and it displeased him that there was no judgment. And he saw that there was no man, and wondered that there was no intercessor: therefore his arm brought salvation unto him; and his righteousness, it sustained him. For he put on righteousness as a breastplate, and an helmet of salvation upon his head; and he put on the garments of vengeance for clothing, and was clad with zeal as a cloke. According to their deeds, accordingly he will repay, fury to his adversaries, recompence to his enemies; to the islands he will repay recompence.” – Isa. 59:1-18 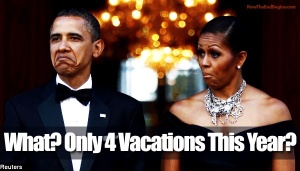 Obama declares “we are no longer a Christian nation”

Any righteous person would have to agree that this is the situation in the world today, even in the halls of power. The United States is a leader in murdering its unborn babies and then wonders why a spirit of murder is released in the land. It’s leaders care more about their own pleasure and luxury than about their oath of office.

After the recent mass shooting in Las Vegas many are calling for the government to do something to protect us but, this shows an utter misunderstanding of the problem, which is not a failure of government but a failure of the moral condition of the people! Government can do little about that.

It is rather the job of the church. It alone has the light which can dispel the darkness – it alone has the salt which can preserve against the corruption of the world. The people themselves have allowed the public schools to outlaw the moral precepts of the Bible, such as the Ten Commandments, that would inoculate our children against the immoral diseases that plague us. The people have glorified and enriched Hollywood who promotes the very violence they want government to do away with. And the current media, which should be proclaiming the truth, will not touch it for fear of their own jobs! 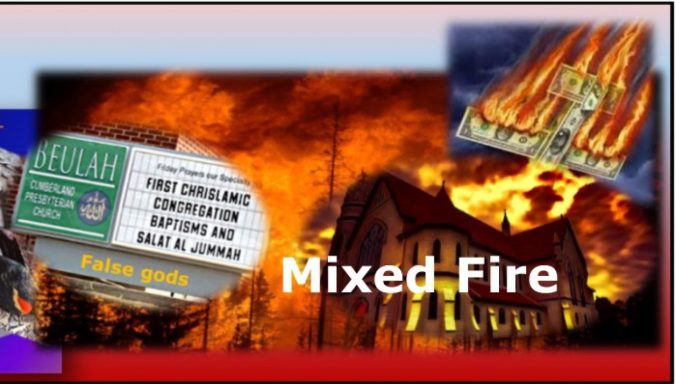 The church is offering mixed fire before God

The tipping point is however, when the Lord could not find enough intercessors for righteousness to stand in the gap so, He steps in Himself to render righteous judgment.

Judgment is coming to the socialists and marxist who act as ‘adversaries’ against the Lord and to atheists who deny His existence. Their own deeds will convict them. But, who are the ‘islands’ that are mentioned? For this we need a little study.

The word for islands is ‘iy (pronounced eee) in Hebrew and means ‘a habitable spot (as desirable); dry land, a coast, an island:—country, isle, island’ and can even mean ‘continent’. Another interesting point is the very next verse in Isaiah speaks about the result of the judgment that is poured out –

It appears that the judgment God pours out results in a repentance because of the ‘fear the Lord’. I believe it is also important to notice that these islands seem to be in the west. Another verse in Isaiah makes reference to these islands as well –

In this verse the name Tarshish is associated which is very important. Tarshish is obviously suffering something that makes them wail. After the judgment of Isaiah 59, a transformation seems to take place in Tarshish for by Isaiah 60, they seem to be doing the Lord’s work –

“Surely the coastlands (‘iy) shall wait for Me; And the ships of Tarshish will come first, To bring your sons from afar,” – Isa. 60:9

This chapter and verse is talking about completing the return of Jews to Israel that is prophesied in many places. Notice that ships of Tarshish are leading this effort.

Another book of the Bible sheds light on this mystery; the Book of Ezekiel where it teaches about a coming war with Gog and Magog –

“Sheba, and Dedan, and the merchants of Tarshish, with all the young lions thereof, shall say unto thee, Art thou come to take a spoil? hast thou gathered thy company to take a prey? to carry away silver and gold, to take away cattle and goods, to take a great spoil?” – Ezek. 38:13

The situation is Gog and Magog,  which I believe is Russia (see Gog Rising p5) is invading Israel. Several countries question the motives of Russia; Sheba and Dedan (modern Saudi Arabia, etc.), and the merchants of Tarshish. 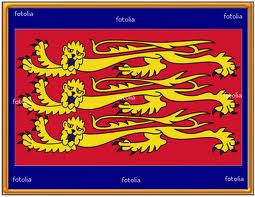 There is good evidence that Tarshish is England. The KJV reads “Tarshish and all the young lions”. England’s national symbol is the lioness and her young lions would be her colonies. A number of considerations point to Great Britain as the Biblical Tarshish. Ezekiel 27:12 states that Tarshish was rich in “silver, iron, tin, and lead” minerals which Britain produces.

This source of tin was known to the Phoenicians as “Barath-anak“, which means ‘land of tin’. The Greeks interpreted this name as Britain. Herodotus also alludes to the British Isles as the ‘tin islands.’

Great Britain is proverbially known as “a nation of shop-keepers”, which is perhaps where the allusion to “the merchants” of Tarshish comes from. Great Britain’s royal standard is a mother lion, which is on every imperial coat-of-arms and her coinage. This could explain her colonies being likened to ‘young lions“. If this identification is the correct one, and I believe it is, then we must consider who these colonies are; the United States ?, Canada ?, India ? Because as we will see, they will bear some consequences for not standing with Israel with more than just talk!

“And I will send a fire on Magog, and among them that dwell carelessly in the isles (‘iy): and they shall know that I am the LORD.” – Ezek. 39:6

Is this ‘fire’ part of the judgment the Lord brings on the islands because of their wickedness in Isaiah 59? Is America one of the recipients as ‘a young lion’ of Tarshish? If she is, does the fact that ‘iy is often translated as ‘coastlands’ mean the cities of the coast will be most affected?

As I study these scriptures and observe the condition of the United States, I believe they may very well be describing us. You, of course will have to judge for yourself. If I am correct, I expect the United States, and perhaps others as well, to soon suffer a series of bad setbacks; be they financial, weather related, or terrorist events. If there is any good news in this, it is that we appear to recover and turn back to the Lord.

One last thought from Isaiah –

What does the phrase “When the enemy comes in like a flood” refer to? I believe there may be an answer to this question in Revelation 12 – 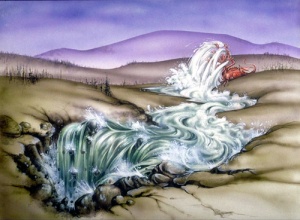 “And to the woman were given two wings of a great eagle, that she might fly into the wilderness, into her place, where she is nourished for a time, and times, and half a time, from the face of the serpent. And the serpent cast out of his mouth water as a flood after the woman, that he might cause her to be carried away of the flood.” – Rev. 12:14,15

Revelation 12 describes the final war between Satan and God. Satan and his angels are thrown out of heaven to the earth where he begins his final effort to destroy the woman, which is Israel. He sends a ‘flood of water’ after the woman to destroy her but even the earth helps the woman by swallowing the flood. We are told later what the water represents –

“And he saith unto me, The waters which thou sawest, where the whore sitteth, are peoples, and multitudes, and nations, and tongues.” – Rev. 17:15

It sounds very much like the United Nations or a similar organization. Remember, Isaiah prophesied –

When this ‘flood’ happens, the Spirit of the Lord lifts up a standard against the devil. It is my prayer that the United States is not part of the ‘flood’ of peoples coming against Israel but rather, we are the two wings of a great eagle that help Israel escape.

In conclusion, in Isaiah 59 when it states “to the islands he will repay recompence” warns us of a coming judgment on the United States because our wickedness and disregard of God and His laws. But the very next verse seems to indicate a return to the Lord –

It also seems the United States, whose national symbol is the eagle, will be there to aid Israel as the antichrist and the devil try to destroy her one last time. At least that is my conclusion.