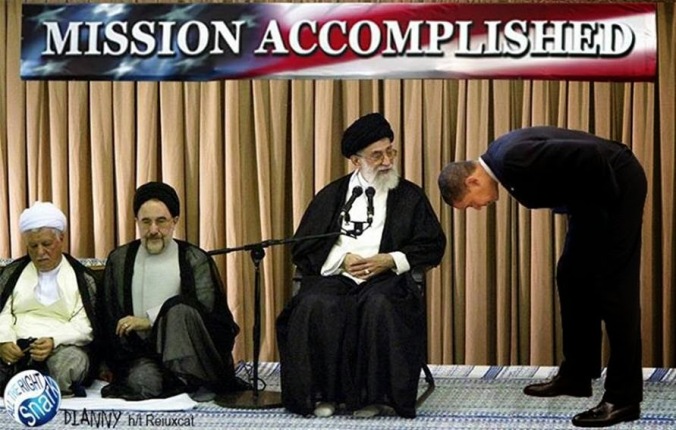 Obama’s Idea of Negotiating with Iran (picture may be photoshopped)

Issues over the Mideast and Israel are reaching the critical point. The so-called non-nuclear agreement reached with Iran must soon be affirmed, Russia, Iran, and Hezbollah are building dramatically on Israel’s northern borders, and Hamas is slowly taking over in the Gaza Strip and West Bank.

October 15th is soon approaching on which President Trump must either certify the Iranian nuclear deal made by President Obama or reject it. The same left-wing fear mongers that are responsible for the deal are now pressuring Trump to not reject it. This article from Debka File clearly outlines the issue –

“Trump’s opponents, especially those who backed President Barack Obama’s Iran policy, have come up with a new argument to support their insistence on keeping the nuclear deal he negotiated in place.  Ditching it, they say, would prompt Iran to reactivate its nuclear program at top speed and start building a bomb without further delay. Tehran would also restore production at its Arak plutonium plant, in breach of its commitment to disable the plant with cement.

They have even dragged in Abdul Qadeer Khan, father of the Pakistan nuclear bomb, who sold nuclear secrets to China, North Korea, Libya and Iran, to support their claim that Iran can quickly pull the blueprints out of a drawer and go straight to building a bomb.”

This argument comes strangely from the same US and Israeli security circles, which during the negotiations for the nuclear deal, vociferously dismissed as scaremongering every warning that its terms left Iran with its nuclear facilities fully intact and ready for reactivation at a moment’s notice.

Those same circles, instead of admitting they were wrong then, now threaten the incumbent president that he will bear the blame if the danger they missed then comes to pass now, as a result of the flawed nuclear deal.

The truth is that Iran is brazenly cheating on the nuclear deal on which its foreign minister shook hands two years ago with his counterparts from the US, Russia, China, France, Britain and Germany.  And not just in spirit. The White House is not saying more than that because Trump and his advisers fear the consequences of a flat accusation of flagrant breaches in deed.

DEBKAfile’s military and intelligence sources list three of the most outrageous violations:

Not only did the ‘intelligent’ Democrat negotiators give us a flawed deal but, they paid Iran multi-billions in bribe money to accept it!

Israel being Surrounded by Iran, Hezbollah and Hamas

Nikki Haley’s warning to the international community was prompted by these dangerous events. Although her words were powerful, telling and timely, it is hard to see any sign of their being followed up by other parts of the Trump administration.

With the southern front against Israel in the bag, Iran and Hizballah this week put together its northern front, just two or three kilometers from Israel’s Golan border with Syria. This could not have happened without the Trump administration submitting to Russia’s demand to revise their de-escalation zone project for the Syrian Golan, so that Iranian and Hezbollah forces are no longer required to distance themselves 40-50km from the zone, but only 8km.

Iran and Hizballah in Syria have in consequence been quietly shortening their distance from the Israeli border. But this week, they made a major leap forward, when the Russian monitors brought a group of Iranian and Hizballah officers all the way to Quneitra. There, they were given a base under Russian protection within sight of the Israeli Golan.

All the while these things are happening, Israel seems paralyzed to act. Meanwhile Trump, Egypt, and Russia are pushing strongly for a ‘peace agreement‘ between Israel and the Palestinians. They seem to be willingly blind to recent facts that Mahmud Abbas is near retirement of the PA (he is over 80 years old) and Hamas is placing its senior people in the new PA political structure. Also, Hamas has refused to dismantle its military or turn it over to the new coalition being formed. Also, Israel is going to be forced to give up land to the new PA, which God has specifically told Netanyahu not to do.

The Russians are sitting back, gaining ground in Syria, and politically with Syria, Iran, Turkey, and Hamas. My conclusion is the war of Gog of Ezekiel 38, 39 is about to happen. Even though God will supernaturally deliever Israel, the results will be catastrophic for all concerned, and that means the United States as well.

If ever there was a time to settle accounts with God, this is it. A plethora of earthly signs, heavenly signs, and political signs are warning that these events are about to happen. I believe it will be a short time after this war that the Antichrist government will appear on the scene.