In the Book of Revelation, before seventh seal is broken, God commands His servants to be sealed for their protection.

When the seventh seal is opened, seven angels are released; the first four to do harm to the trees, the seas, the rivers and springs of water, and even the Sun and Moon are struck. If this were not enough, the remaining three angles are given the titles of Woe, Woe, and Woe. They release demons on the earth to torment the ungodly and gather an army of 200,000 to the final battle of Armageddon. When the seventh angel sounds, man’s rule on earth will be finished and the mystery of God would be finished, as He declared to His servants the prophets.

One of the mysteries that has troubled Bible scholars are the verses quoted above about the sealing of God’s servants. We know that (1) the servants of God are sealed, and we know (2) that only 144,000 of the tribes of the children of Israel are sealed. These two facts raise a myriad of questions:

Through the years there have been many answers given to these questions, none of them fully satisfactory. For example, those of the pre-tribulation rapture persuasion answer the 1st question in the affirmative believing that all true believers have already been raptured by this time. However, they also teach that these believers will not have to face the great tribulation promised to come by Jesus. But, after the twelve tribes of Israel are listed, the next verses seem to include all tongues, tribes, and nations in the listing and they all go through the tribulation, which are obviously more inclusive than just Israel. 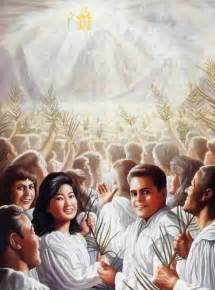 “After these things I looked, and behold, a great multitude which no one could number, of all nations, tribes, peoples, and tongues, standing before the throne and before the Lamb, clothed with white robes, with palm branches in their hands, … Then one of the elders answered, saying to me, “Who are these arrayed in white robes, and where did they come from? And I said to him, “Sir, you know.” So he said to me, “These are the ones who come out of the great tribulation, and washed their robes and made them white in the blood of the Lamb. “ – Rev. 7:9-14

Also, we know from other scriptures that the rapture does not take place until after the first resurrection which is not mentioned in Revelation 7 –

“For the Lord Himself will descend from heaven with a shout, with the voice of an archangel, and with the trumpet of God. And the dead in Christ will rise first. Then we who are alive and remain shall be caught up (raptured) together with them in the clouds to meet the Lord in the air. And thus we shall always be with the Lord.” – 1 Thes. 4:16,17

But, the Lord does not come on the clouds of heaven until chapter 14 of revelation –

“Then I looked, and behold, a white cloud, and on the cloud sat One like the Son of Man, having on His head a golden crown, and in His hand a sharp sickle.” – Rev. 14:14

This is after the Antichrist, the false prophet, the fall of Satan from heaven, and the battle of Armageddon have happened  and God’s judgments on the earth have been poured out. So, I believe the 1st question cannot be true.

Concerning the 2nd question these are the 12 tribes that are mentioned. Notice that the tribe of Dan is not included but both Joseph and the half tribe of Manasseh are included. Some say Dan is excluded because they were so prone to idol worship (introducing the golden calves of northern Israel). But, most of the northern tribes were in apostasy at some time and also the southern tribes. Also in Ezekiel’s vision of the final allotment of land to Israel and his description of the Holy City in chapter 48, the tribe of Dan is included, having a gate named after it and land allotted to it. Ezekiel does not include the tribe of Manasseh either and

his order of tribes is different. This may sound to you as unimportant but, in God’s words every jot and title is important. One scholar suggests that the tribal names have meanings themselves and that explains the differences. Also, in Micah’s prophecy of Israel’s return, he specifically says they all will be brought home.

“I will surely assemble all of you, O Jacob,
I will surely gather the remnant of Israel;
I will put them together like sheep of the fold,
Like a flock in the midst of their pasture;
They shall make a loud noise because of so many people.” – Micah 2:12

This is the prophecy of the Bozrah Deliverance of which I have written of before.  It likely happens after the devil is thrown down from heaven (Rev. 12:7-9) and he goes after the woman (Israel) and she flees into the wilderness (Rev. 12:6). She is protected by God for 3½ years which are the tribulation years. It is interesting to me that the Hebrew children had to go through a wilderness experience to be prepared to enter the Promised Land and here they endure another wilderness experience, although shorter, after which they will be ready for the Millennial Promised Land. It will be as Paul wrote –

“For I do not desire, brethren, that you should be ignorant of this mystery, lest you should be wise in your own opinion, that blindness in part has happened to Israel until the fullness of the Gentiles has come in. And so all Israel will be saved, as it is written:

“The Deliverer will come out of Zion,
And He will turn away ungodliness from Jacob; For this is My covenant with them,
When I take away their sins.”

When considering these questions, one must also remember that Gentile believers are grafted into the Root of Israel, fellow heirs and Abraham’s seed and as such inherit the same promises as Israel through Christ.

“And if some of the branches were broken off, and you, being a wild olive tree, were grafted in among them, and with them became a partaker of the root and fatness of the olive tree,” – Rom. 11:17

“that the Gentiles should be fellow heirs, of the same body, and partakers of His promise in Christ through the gospel,” – Eph. 3:6

“And do not grieve the Holy Spirit of God, by whom you were sealed for the day of redemption.” – Eph. 4:30

“And they overcame him by the blood of the Lamb and by the word of their testimony, and they did not love their lives to the death. … And the dragon was enraged with the woman, and he went to make war with the rest of her offspring, who keep the commandments of God and have the testimony of Jesus Christ “ – Rev. 12:11,17

Well, I have carried on long enough and perhaps raised more questions than I have answered. As to the 144,000 number, I’m convinced it has more meaning than just its numerical value. Perhaps as you study and pray the Holy Spirit will give you the answer to these questions and if so, I will have achieved one goal of this article.