A church that is asleep or compromised might as well be dead as far as being salt in a corrupt society or being light in a dark world are concerned.

“And unto the angel of the church in Sardis write; These things saith he that hath the seven Spirits of God, and the seven stars; I know thy works, that thou hast a name that thou livest, and art dead. Be watchful, and strengthen the things which remain, that are ready to die: for I have not found thy works perfect before God.” – Rev. 3:1,2

Jesus warned that false prophets and false teachers would abound in the end days so, I should not be surprised when I see it, but I am still grieved. I just heard a prophecy teacher named J.D. Farag talk about what he called Lordship Salvation, which he called ‘another gospel’ than the one Paul preached. He made the statement that shocked me – “Repentance cannot be a precondition for salvation”. He claimed that made our salvation a product of works and went against Paul’s statement that “we are saved by grace and that not of ourselves”. By his circular reasoning and taking Scripture out of context, he destroyed even the Lord Jesus’ preaching of salvation. When Jesus began His ministry after spending 40 days in the wilderness, His first message was “From that time Jesus began to preach, and to say, Repent: for the kingdom of heaven is at hand.” – Matt. 4:17.  And when Peter preached the sermon at Pentecost, he said “… Repent, and be baptized every one of you in the name of Jesus Christ for the remission of sins, and ye shall receive the gift of the Holy Ghost.” – Acts 2:37,38. Farag seems to twist the working of grace and repentance. Farag mixes false statements in with truth and that is what makes deception so dangerous.

But, he is not alone among the deception that abounds today. 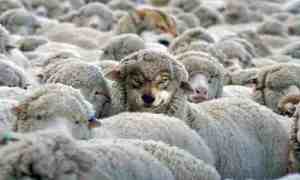 Shannon Johnson Kershner: The belief that Christ is not the only way to salvation is not a new heresy, but instead a variation on the Universalism Heresy now promoted by the Reverend Kershner of Chicago’s 5,500-member Fourth Presbyterian Church. In a recent podcast with the Chicago Sun-Times, the question was put to her bluntly, “Is Christianity the only way to get to Heaven?” to which she replied “No.” Yet it is important to note that Rev. Kershner is not alone among her fellow Presbyterian Pastors, 45% of whom were recently revealed not to believe that only followers of Christ can be saved.

Elizabeth Eaton: Another ‘Christian’ leader eager to deliver good news, the presiding “bishop” of the Evangelical Lutheran Church of America (ELCA) has expressed her belief that although Hell may exist, it is entirely empty because “God doesn’t give up on those who reject Him.”

Millie Horning Peters: She believes that Christian leaders should actively promote abortions and assist women in obtaining them. She believes that “It’s time for the religious left to rise up” in support of abortion. She has accepted a position as the chair of the Kentucky Religious Coalition for Reproductive Choice. Could there be anything more diabolically deceptive that one who calls herself a Christian leader and yet promotes the murder of unborn children?

The Methodist Deacon M. Barclay is now accepted as a non-binary Deacon in Chicago, which means that she prefers the pronoun “they” rather than “she” and doesn’t identify as either gender. In the Methodist Church, there are two orders of ministry: deacons and presbyters.

The Episcopal Church USA has given itself over to a “Mother Earth” form of Christianity that preaches tolerance and inclusivity for everything except what some might consider traditional, biblical Christianity. The Christ Church of Alexandria is so inclusive that it does not have a single male pastor listed on its website. All four are women. One of them, the Rev. Ann Gillespie, is a former Hollywood actress who recently closed a sermon with a new version of the Apostle’s Creed. It starts out, “I believe in God, our Mother Bear, source of all being,” and it refers to the Virgin Mary as “the bad-ass womanist liberation theologian, Mary.”

At Christ Church of Alexandria, Virginia, where the motto is “All are welcome, no exceptions,” the board of vestry has decided it can no longer tolerate a plaque dedicated to the memory of its most famous member, George Washington. That’s right, George Washington himself was one of the founding members of Christ Church, which is affiliated with the Episcopal Church USA. He purchased pew No. 5 when the church opened in 1773 and attended for more than 20 years whenever he rode north from Mount Vernon to do business in town. But, he is no longer welcome.

Increasing numbers of the Church in America are unable to discern deception when they see it, largely because they do not know the Word of God.  Tragically, many Christians–or at least those who identify as Christians–have given up the Bible, which Ashenden calls “the bedrock of the church”–without a whimper of protest. A recent survey says that 60 percent of the members of the Church of England “never” read the Bible–that’s right, never. But, also because they have rejected parts of God’s truth –
“And with all deceivableness of unrighteousness in them that perish; because they received not the love of the truth, that they might be saved. And for this cause God shall send them strong delusion, that they should believe a lie: That they all might be damned who believed not the truth, but had pleasure in unrighteousness.” – 2 Thes. 2:10-12

Did House Speaker Paul Ryan just return a favor to his Islamist donors?

This delusion goes far beyond the church world into the political world as well. Politicians are able to say one thing and then do another because they are never held to

account. The Democrats accuse the Republicans of colluding with the Russians when all along it is they who are selling out to the Russians. But, the Republicans are doing the same things. For example they say they are against radical Islamic terrorism but then Paul Ryan blocks an amendment that would strip Hamas of over 300 million taxpayers dollars per year, even though Hamas is a recognized terror group.

What would make Christian parents send their most prized possessions into Satan’s domain where they will taught to disregard God, their parents, and the moral absolutes our country has followed for generations; where the country they were once proud of is denigrated on a regular basis and where they indoctrinated into marxist principles or Islamic ideology? This is what they are doing when they send their children to public schools without serious involvement or oversight into its curriculum. A sleeping church has allowed the enemy to take over.

Thankfully, Jesus still loves His Church and has a remedy for its waywardness –

If we hear the Lord’s trumpet of alarm, we can wake up, repent, and turn back to the way of the Lord. As a believer of 53 years, I have heard this warning call many times and responded and each time received the Lord’s lovingkindness. You can too. Pray that all the church does as well.

One thought on “The Sleeping Church”