That ‘sleeping giant’, the UN, has been stirred to life again. What is responsible for this infusion of energy? Why, it is the only thing that stirs this megalithic ‘United Nothing’ to action – some nation dared to honor the God of Abraham, Isaac, and Jacob. In this case, it was the United States who dared to recognise what God declares in His word – 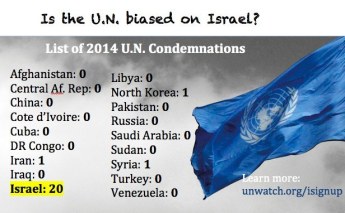 In the life of the United Nations they have issued more sanctions against Israel than all other nations together and now the United States is being targeted because we dare to stand with israel. If a wise person had a dog and it bit him everytime he fed it, he would get rid of it – so, why are we continuing to support the UN? Some will say, ‘to talk instead of fighting wars’, to which I would say, ‘What wars have been stopped by talking?’ Peace might have been the good intention for the UN but, it has failed in its mission. All it does is spend money on mostly undeserving nations and groups with no good results. By now, I would think any sane person would have to admit that you cannot buy peace! 30 years of North Korea ought to prove that. Maybe we should start listening to God and His word instead of the UN.

“Why do the nations rage, and the people plot a vain thing? The kings of the earth set themselves, and the rulers take counsel together, against the LORD and against His Anointed, saying, “Let us break Their bonds in pieces and cast away Their cords from us.” He who sits in the heavens shall laugh; The Lord shall hold them in derision.” – Psalm 2:1-4

“For behold, in those days and at that time,  When I bring back the captives of Judah and Jerusalem, I will also gather all nations, And bring them down to the Valley of Jehoshaphat; And I will enter into judgment with them there On account of My people, My heritage Israel, Whom they have scattered among the nations; They have also divided up My land.” – Joel 3:1-2

The nations of the world are choosing against God and the Valley of Jehoshaphat, which means the valley of judgment, is fast approaching. The captives of Judah are back and God is going to make Jerusalem a rock of contention, a burdensome stone for all who try to oppose God’s plan for it.

“And in that day will I make Jerusalem a burdensome stone for all people: all that burden themselves with it shall be cut in pieces, though all the people of the earth be gathered together against it.” – Zechariah 12:3

Satan, and those who follow him, hate God and because He has put His name in Jerusalem, they cannot stand Jerusalem under His control or under the control of any who acknowledge Him. This is what the issue is all about – do you stand with God, or do you follow Satan?

I pray our nation will continue following God!