2018 the Year of New Beginnings

We have now entered the year 2018, a year that I believe will be marked by new directions and new fulfillments of God’s word. Politically, we already are witnessing the turmoil new directions can bring.

The United Nations was formed after WWII with the hope of world peace but it’s founders forgot the key ingredient of peace – the Prince of Peace, Jesus Christ. Either Christ will rule in the hearts of men or Satan will, but egotistical men want to believe they can achieve what God says is not possible without Him. And these men have only succeeded in building another Tower of Babel

“Oh, that you had heeded My commandments! Then your peace would have been like a river, And your righteousness like the waves of the sea. … There is no peace,” says the LORD, “for the wicked.” – Isa. 48:18-22

UN Sanctions on Israel outnumber those on all other nations

One goal God has made clear in the Bible is the restoration of Israel, Jerusalem, and the Temple in Jerusalem where God’s name is to be remembered. Since the very beginning of the United Nations, they have opposed this goal. Much of the church world also has opposed this goal, claiming Israel has ceased to exist or the Church has replaced it. Through ignorance and rebellion they have been doing the devil’s work. The United Nations passes more sanctions against Israel than all the other nations combined even though many of those nations are oppressing and killing their own people. Israel is always ready to help when disasters hit other nations, even though those same nations are condemning Israel and denying its right to exist. Did this opposition to His stated goal catch God by surprise? No, He just uses it as a signpost to those watching, warning of the nearness of the end. He said,

“And in that day will I make Jerusalem a burdensome stone for all people: all that burden themselves with it shall be cut in pieces, though all the people of the earth be gathered together against it.” – Zechariah 12:3

“For behold, in those days and at that time,  When I bring back the captives of Judah and Jerusalem, I will also gather all nations, And bring them down to the Valley of Jehoshaphat; And I will enter into judgment with them there On account of My people, My heritage Israel, Whom they have scattered among the nations; They have also divided up My land.“ – Joel 3:1,2

The nations have been gathered politically against Israel (in the United Nations) and they will soon be gathered militarily against Israel as well. As I wrote in Preparation for the Battle Ahead, there is a heavenly war that is about to break out between Satan’s angels and God’s angels and Satan is going to be cast down to earth with his angles. Then will begin his final assault on God’s chosen people,  Israel and those who have the testimony of Jesus. 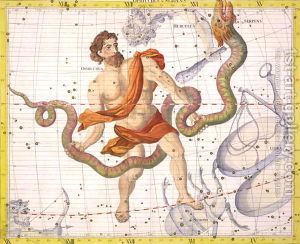 But, there is a principle revealed in the Bible that many have overlooked. It is the principle of the Restrainer. God even placed a constellation in the heavens to remind man of this. God’s plan will always come to pass and He often uses Gentile nations to perform it. He used Cyrus and Darius of Persia to fulfill His word to Jeremiah. He also used Nebuchadnezzar of Babylon and the Assyrians to chastise Israel and Judah for their disobedience. Jesus Himself restrained Rome from destroying Israel while He was on earth. There is another Restrainer talked about in the New Testament by the Apostle Paul.

“Do you not remember that when I was still with you I told you these things? And now you know what is restraining, that he may be revealed in his own time. For the mystery of lawlessness is already at work; only He (or he) who now restrains will do so until He (or he) is taken out of the way. And then the lawless one will be revealed, whom the Lord will consume with the breath of His mouth and destroy with the brightness of His coming.” – 2 Thes. 2:5-8

The Antichrist and his rule are coming and he will be revealed after the War in Heaven John wrote about in Revelation 12. And even though the mystery of lawlessness is at work, it can only go so far – it is being restrained. Is there any doubt that if unrestrained the Muslim countries of the East would be on Israel like rabid dogs? Or is there any doubt that China and its surrogates in the East would be doing the same things Japan tried in WWII? Russia and the European nations have always longed to restore the Roman Empire. But, there is a Restrainer at work to stop their opposition of God’s plans. Who or what is it?

I believe it currently is the United States and its close allies. However, the spirit of Antichrist is very close to victory against us – England is all but overcome with Islam as is Canada with French humanistic doctrine that is against God and all He stands for. Under President Obama this evil spirit has come very close to overcoming America and removing its Judeo-Christian foundations. But, in answer to many prayers and in support of His plans, God gave us a reprieve – the election of Donald Trump. America has once again become a force with which the Antichrist spirit has to reckon with. Most of the nations of the world and certainly all those ruled by the Antichrist spirit hate us and President Trump with vitriolic hatred. Iran calls the United States “the Great Satan”, China uses its surrogate North Korea to threaten war with us while staying in the background in case something goes wrong. Russia is undermining our influence in the Mideast with an aim to destroy Israel. Turkey, Jordan, and Egypt want our money but, work to remove us as a support to Israel. But, their time is soon at hand.

Remember, the time for this Restrainer is limited – he will be removed when God is ready to conclude His plans. We should prepare for this time and Paul tells us how to prepare.

“The coming of the lawless one is according to the working of Satan, with all power, signs, and lying wonders, and with all unrighteous deception among those who perish, because they did not receive the love of the truth, that they might be saved. And for this reason God will send them strong delusion, that they should believe the lie, that they all may be condemned who did not believe the truth but had pleasure in unrighteousness. … Therefore, brethren, stand fast and hold the traditions which you were taught, whether by word or our epistle.” – 2 Thes. 2:9-15

As Paul wrote, we should love the truth (God’s word), stand on the Biblical traditions, and take no pleasure in unrighteous acts (this eliminates most of what comes out of Hollywood and TV). Biblical traditions include marriage between one man and one woman, only two genders – male or female. If we hold to these traditions, we will have opposition enough. Remember, Jesus said “if they hate the Master, they will hate His servants as well”. But, if we stand to the end, we shall be saved.