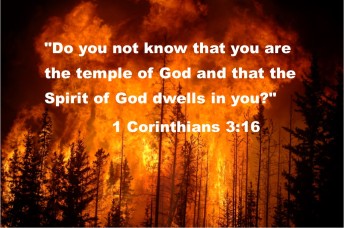 I love the 3:16’s in the Bible and the one that most people have heard of is in the Book of John, the beloved disciple –

“For God so loved the world that He gave His only begotten Son, that whoever believes in Him should not perish but have everlasting life.” – John 3:16

Another important 3:16 is found in 1 Corinthians and it reveals that we are the Temple of God because the Holy Spirit dwells in us. But, as the picture above reminds us, fire is a part of being the Temple of God. When John the Baptist prophesied about the coming Messiah, he said –

“John answered, saying to all, “I indeed baptize you with water; but One mightier than I is coming, whose sandal strap I am not worthy to loose. He will baptize you with the Holy Spirit and fire.” – Luke 3:16

Christians often forget ‘the fire’ part of the promise but God does not! Fire cleanses and purifies and God intends to have a bride for His Son that is spotless and pure. John goes on to declare –

“His winnowing fan is in His hand, and He will thoroughly clean out His threshing floor, and gather the wheat into His barn; but the chaff He will burn with unquenchable fire.” – Luke 3:17

In His letter to the seven churches in Revelation, Jesus counseled the Laodicean church, which had become lukewarm –

“I counsel you to buy from Me gold refined in the fire, that you may be rich; and white garments, that you may be clothed, that the shame of your nakedness may not be revealed;  – Revelation 3:18

Lukewarm Christians often overlook the attitude of Jesus toward the lukewarm in the Church, which is given in another 3:16 verse –

As I wrote in Preparation for the Battle Ahead, there is no victory in this end-time battle for the lukewarm. Churches that have surrendered to the world’s standards will not be able to stand for Christ in the battles ahead. Those that do not preach the word of God to sinners will not stand with Christ. They will instead be given a “spirit of strong delusion”, so they cannot receive the truth of God.

This is not my declaration – it is what God Himself is saying. I am saying that 2018 is going to usher in this truth more than in former years. We had better all strive to be more righteous than ever before. The Golden Rule had better become a guideline for our treatment of others. We had better begin honoring the true God of Creation like never before and I can tell you as a retired teacher of science and math that the doctrine of Evolution is a false doctrine. It is a deception designed by the devil to destroy faith in God.

The family is part of God’s creation between a man and a woman whose purpose is the happiness of mankind and the producing of godly seed. No-fault divorce is simply an invention of the devil to undermine God’s righteous plan. I am not saying that divorce condemns anyone to hell, it can be repented of like any other sin, but it will certainly rob you of blessings that could have been yours.

“And this have ye done again, covering the altar of the LORD with tears, with weeping, and with crying out, insomuch that he regardeth not the offering any more, or receiveth it with good will at your hand. Yet ye say, Wherefore? Because the LORD hath been witness between thee and the wife of thy youth, against whom thou hast dealt treacherously: yet is she thy companion, and the wife of thy covenant. And did not he make one? Yet had he the residue of the spirit. And wherefore one? That he might seek a godly seed. Therefore take heed to your spirit, and let none deal treacherously against the wife of his youth.” – Mal. 2:13-15

The lukewarm church has said these truths of God are not all that important, and they have gradually slid downhill to accept homosexuality, sexual immorality, transgenderism and by example they have hid their light under a bushel basket. As a result, the church in many nations has become irrelevant and God is going to remove their Lampstand, if they don’t repent.

The Holy Spirit is beginning to burn away the chaff and the dross of impurity from His church. All who humble themselves to His chastisement and repent will be cleansed and equipped for the battles ahead. I for one want this and I want to be in a fellowship that teaches this. I hope you do too.