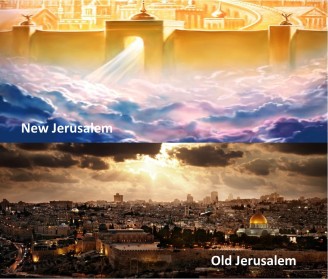 “So the angel that communed with me said unto me, Cry thou, saying, Thus saith the LORD of hosts; I am jealous for Jerusalem and for Zion with a great jealousy. And I am very sore displeased with the heathen that are at ease: for I was but a little displeased, and they helped forward the affliction. Therefore thus saith the LORD; I am returned to Jerusalem with mercies: my house shall be built in it, saith the LORD of hosts, and a line shall be stretched forth upon Jerusalem.” – Zechariah 1:14-16

We are living in momentous days. Throughout Scriptures God promised to bring His people, the Jews, back to the land of Israel and to Jerusalem, and He has done it! I am old enough to have witnessed it in 1948 and in 1967. The young man Zechariah prophesied it and he revealed the next step of God’s plan – “my house shall be in it, saith the Lord of hosts.” Notice, the Lord uses His name “Lord of Hosts”, which is His war name. He alone commands the armies of heaven, and when they move, no force in heaven or earth can stand against them! There may be wars that have to happen first but, God will use them to humble the nations and to teach Israel to trust in Him alone and not in the arm of flesh. The pen of Zechariah reveals in broad strokes things that will happen first but, the goal is simple – God will have a house in Jerusalem and will once again return there.

I have included in this post a modern Jewish prophet who is speaking these same things – Jonathan Cahn.

As we have seen, the reaction of the United Nations, which represents all the nations of the world, and the Islamic nations, clearly show their opposition to God’s plan. It is as David prophesied in Psalm 2 –

“The kings of the earth set themselves, and the rulers take counsel together, against the LORD, and against his anointed, saying, Let us break their bands asunder, and cast away their cords from us.” – Psalm 2:2,3

God just laughs at them and prepares to judge them. His advice to them is –

“Kiss the Son, lest he be angry, and ye perish from the way, when his wrath is kindled but a little. Blessed are all they that put their trust in him.” – Psalm 2:12

There is a way to escape the judgment that is soon coming to these nations, it is to bow their knee to Jesus the Messiah, the Son of God. But, while the invitation is there, God knows that most of them will not avail themselves of it, so, the battle plans of the Lord of Hosts will continue as planed.

First, those nations that are squatting on the land God calls “My land” will be cleared off –

“I will also gather all nations, and will bring them down into the valley of Jehoshaphat, and will plead with them there for my people and for my heritage Israel, whom they have scattered among the nations, and parted my land.” – Joel 3:2

“They have said, Come, and let us cut them off from being a nation; that the name of Israel may be no more in remembrance. For they have consulted together with one consent: they are confederate against thee: The tabernacles of Edom, and the Ishmaelites; of Moab, and the Hagarenes; Gebal, and Ammon, and Amalek; the Philistines with the inhabitants of Tyre; Assur also is joined with them: they have holpen the children of Lot. Selah. … Who said, Let us take to ourselves the houses of God in possession. … Fill their faces with shame; that they may seek thy name, O LORD. Let them be confounded and troubled for ever; yea, let them be put to shame, and perish: That men may know that thou, whose name alone is JEHOVAH, art the most high over all the earth.” – Psalm 83:4-18

These people groups make up those we know today as Gaza, the West Bank, Hamas, Hezbollah and Jordan and they have constantly stood against the plan of God with one war after another, terrorism and uprisings. I believe God will start His cleansing with them. I have written about them in The Psalm 83 War.

Next will come the war with Gog and Magog written about in Ezekiel 38 and 39. It will involve nations further abroad and will I believe be led by Russia. Russia is preparing for this war even as we speak. I have written several articles on this war and there is one statement by God that all nations need to listen to – “I am against thee, O Gog” (Ezek. 38:3). No one should be for someone God is against!

After this war, one in which God has to move supernaturally to save Israel, Israel will be humbled from her prideful ways and the power structure of the world will be so changed that room for a new power base, headed by the Antichrist, will arise. This will be concluded with the final war, known as Armageddon.

All these wars will result in purifying the world to receive the rule of God’s Messiah and the coming of the New Jerusalem from heaven. They surely will be great birth pangs that will result in the joy of new life, Zechariah foretold –

There are many more revelations in Zechariah that speak to our times but, they will have to wait to another posting. God is moving right on time, according to His schedule. The question is – are we?