I recently read a Facebook comment that I can’t resist replying to – it is below and I block the name out because I don’t want to cause trouble for the author. He stated –

I want to answer as a Christian who believes the Bible is the Word of God. As such, some will call me ‘a conservative’ but there are many conservatives that do not believe or practice Biblical principles.

On the issue of government, I believe it is given by God for man’s benefit. Can it be corrupted? The answer lies in another question – can man be corrupted? I believe the only ‘government’ that is truly effective is not external but internal, when the Law of God is written on our hearts by the Holy Spirit. Some parts of the growth are as a result of attacks from enemies but, to blame conservatives for this is less than honest because government growth has occurred under all administrations, probably more under Democrats than Republicans.

True, most conservatives believe in less control of our personal lives but then, so did the Founding Fathers of our country. If you don’t like that principle maybe you are in the wrong country?

I don’t believe Republicans try to impose the Christian belief on anyone but, that does not mean they don’t have the right to express their personal belief in all parts of their life just as you do. As a Christian, I believe you would be much better off if you accepted Jesus Christ as your Savior, but that is your choice. Jesus will not accept anyone who does not come willingly anyway. At the end of your earthly life, you will wish you had taken His offer. There are some who would force your conversion to their faith, if they could, and they are Islamic radicals. They are doing it all over the world.

Ask them who can marry?

Republicans do not tell you who you can marry. In Socialist and Islamic countries they do. As a Christian I must point you to God’s standards because it will be best for you and for society – marriage is between a man and a woman because God desires to have ‘godly seed’ (offspring for the illiterate) – Malachi 2:15. In my flesh I would say ‘I don’t care if you marry a snail, it would just mean we would eliminate any offspring from such as you.’ But, that would be my flesh talking, God would not say that. He would care for your soul and want the best for you. 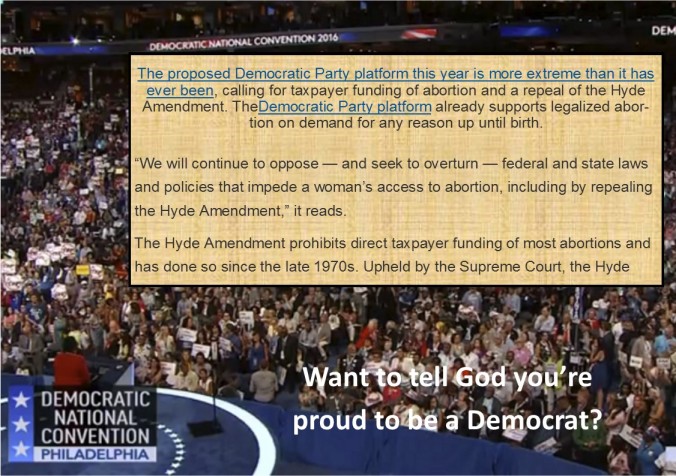 As for woman’s bodies, it seems to me that anyone who wants to have sex with a woman is wanting to control her body. Do you qualify for that? Even women cannot ‘control’ their own bodies – only God can. They can destroy their bodies or the offspring their bodies produce but we must be honest, Democrats are the party of abortion – not Republicans!

Are Republicans conservative? I don’t really care. Rather, I believe “Blessed is the nation whose God is the LORD, The people He has chosen as His own inheritance.” – Ps. 33:12. Who follow the teachings of the Lord more, Republicans, Democrats, or Socialists? Since there are no perfect men,  I will chose to support those who do and looking at the Democrat and Socialist political platforms – I would have to choose Republican.

Have a good day Xxxx.