In 2014 I wrote a 4 part series of articles titled 26 Signs on the Lord’s Soon Return. It isn’t that these signs have not happened throughout history but, that they all are happening together right now, and in ever increasing frequency. This is the warning Jesus gave, that they would be like birth pangs getting closer together and more intense until the time of the delivery.

If you haven’t read this series, I urge you to do so. But, there is another topic I want to concentrate on in this article – it is Psalm 83. This psalm was written by Asaph who besides being King David’s worship leader was also a prophet. Many believe Psalm 83 is a prophecy of a war that has not yet happened and I have written about it before. But, whether that is true or not, Psalm 83 certainly describes events happening right now and it may well lead into the war of Ezekiel 38, 39 .

Do not keep silent, O God! Do not hold Your peace, And do not be still, O God! For behold, Your enemies make a tumult; And those who hate You have lifted up their head. They have taken crafty counsel against Your people, And consulted together against Your sheltered ones. They have said, “Come, and let us cut them off from being a nation, That the name of Israel may be remembered no more.” For they have consulted together with one consent They form a confederacy against You:” – Psalm 83:1-5

If you follow the news at all, you know it is filled with the Palestinians ,Hamas, and Hezbollah threatening Israel in one way or another, all the while blaming Israel and the United States for their problems – problems which are largely caused by their own hateful ways. But, they are smart. They have to be to get so much of the world to support their hatred. The United States continues giving them over $300 million dollars yearly  which they are supposed to use for economic help to their people. But, what do they use it for? Their leaders pocket a large share of it and use the rest to fund terrorism! This support was one of the foolish spending items required by Democrats in the last Omnibus Budget Bill of the U.S. Congress. The Senate Democrat leader is a Jew himself and this money will be used by the PA to kill his own people!

Palestinians say they want peace but, their idea of peace is, you give me all I want and I give you nothing. They refuse to negotiate with Israel because they basically want Israel gone! To gain this goal they continue causing turmoil and ally themselves with others that hate Israel – such as Iran, Turkey, and Israel haters in the USA, Britain, France, and the UN. 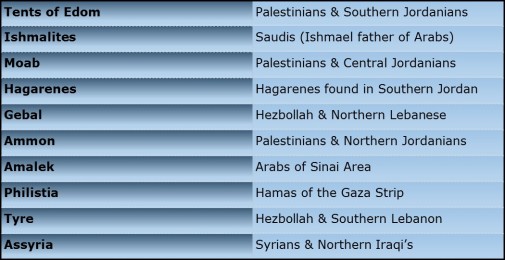 The people Asaph named are not familiar with many today because they are called by other names but, most will recognize their modern names. Contrary to the fake news of today, the Palestinians were never in Israel until after WWII, when new states and population shifts took place in the Middle East. Today’s events in Syria not only alert the world to their true intentions but also to their demonic driven fervor. 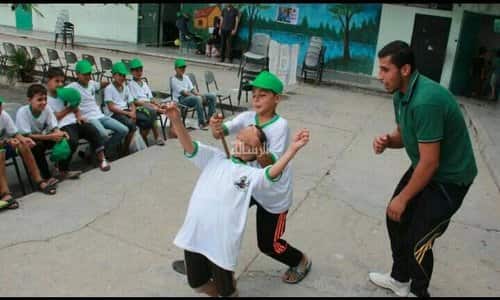 In the United States they hold rallies and marches clamoring against the so-called hatred of Israel and Christians against them but, when I was in Israel in the 70’s, Bethlehem was full of Christian Arabs but, today Islamic Palestinians have killed, beaten, and driven the Christians out. There is certainly no place at the Inn for Christ in Bethlehem today! They teach their children to hate Jews and Christians and train them to kill them.

“They have taken crafty counsel against Your people, And consulted together against Your sheltered ones.” is as true for Christians as for Jewish people by these people! Remember, they and their Iranian backers call the United States the great Satan. They will do whatever they can to bring the United States down because they believe we are the main

backers of Israel. Right now there are Islamic groups operating in the United states, such as CAIR and the Muslim Brotherhood, that are undermining us and supporting Islamic terror around the world.  Under Barack Obama and Hilary Clinton they even got into sensitive positions in the government. They are part of the ‘swamp’ that has to be drained! Even Islamic states honestly looking for peace have named CAIR a terrorist organization but they continue having freedom to operate in the U.S.. The FBI has confirmed this. We should pray for them to turn to Jesus and be saved but, we should be fully aware of their motivations and that of those connected to them. (Huma Abedien’s mother publishes a newspaper for the Muslim Brotherhood in the U.S. and she was Hilary Clinton’s closest adviser.)

Even now, forces have been unleashed among radical Islamic groups that will lead into the fulfillment of the prophecy of Ezekiel 38. Psalm 83 may well be the catalyst that begins it as the following article shows.

This is not a fight for freedom or peace. It is nothing more than Satan’s war plans being unveiled. God has upset their ‘apple cart’ so to speak by putting Donald Trump in office but, they will not give up and Satan’s forces will continue trying to eliminate Trump. Their real motivation is hatred of God, as Psalm 83 declares –

“Your enemies make a tumult; And those who hate You have lifted up their head.”