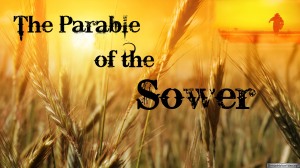 God is moving by His Holy Spirit in many places in the world, bringing in a great harvest of souls. I am reminded of the parable Jesus told about this. It is called the Parable of the Sower. In it Jesus described four kinds of heart conditions that either hinder or prepare for a successful harvest.

“Then He spoke many things to them in parables, saying: “Behold, a sower went out to sow. And as he sowed, (1) some seed fell by the wayside; and the birds came and devoured them. (2) Some fell on stony places, where they did not have much earth; and they immediately sprang up because they had no depth of earth. “But when the sun was up they were scorched, and because they had no root they withered away. And (3) some fell among thorns, and the thorns sprang up and choked them. (4) But others fell on good ground and yielded a crop: some a hundredfold, some sixty, some thirty. “He who has ears to hear, let him hear!” – Matt. 13:3-9

There are four kinds of hearts described in this parable but, only one is able to successfully receive the seed, which is the Word of God. (1) Some hearts are so controlled by their own intellect that they do not understand the Word. The Word of God can only be received by faith and not by our understanding, which has largely been influenced by humanism. The Seed is left laying on the ground and birds (demons) come and eat it up.

(2) Then there are those who get initially excited about the Word and its promises but, they never let the Word sink its roots deep into their lives. They don’t want the testings and trials that serve to sink our roots deeper and so they never find the underground aquifers in the water of the Word of God that help them stand the heat of the sun. Years ago while working in a local group named Interfaith Fellowship, I saw hundreds receive salvation and the baptism of the Holy Spirit with great excitement but many of them never allowed the Word of God to get deeply into their lives and have now fallen away or lie dormant in their faith.

(4) Then finally we have the hearts that are good ground for the Word of God. They take it seriously and strive to be faithful to it. They sometimes fall but, they get up, repent and go on following the Holy Spirit.

I believe we all need to read this parable often because as the Jeremiah says, ‘our hearts are deceitful’ and  cannot always be  trusted –

“The heart is deceitful above all things, And desperately wicked; Who can know it? I, the LORD, search the heart, I test the mind, Even to give every man according to his ways, According to the fruit of his doings.” – Jer. 17:9,10

Now because I believe preachers should concern themselves with the whole of man and not just the spiritual, I cannot resist applying this to present day politics as well.

When former FBI director James Comey stated Hilary Clinton broke the law but she shouldn’t held accountable because she had no intent to break the law, or the Inspector General of the DOJ acknowledged James Comey lied but without intent to break the law – they need to examine how God will judge this. We will be judged by our actions, not our intent!

If Americans operated on God’s principles, there wouldn’t be a ‘Deep State’ in our government. When a man or woman runs as a Republican, they should have to abide by the Republican Platform as stated in the Republican Convention because these are what they all said they represented. There would be no RINO’s for long. A majority of Democrats would not be able to pose as believing in the Constitution when they are really Socialists or Communists in their actions. The only reason they get away with this is because the American people, a majority of which claim to be Christian, don’t hold to a Christian world view, and don’t apply Christian Principles to their voting.

To this majority of Americans, who claim to be Christian, I say check your heart. Where would you fit in Christ’s parable of the Sower?

2 thoughts on “Where is Your Heart?”