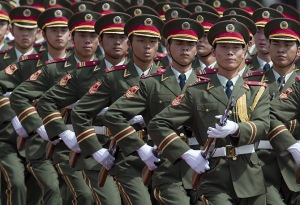 “And the sixth angel poured out his vial upon the great river Euphrates; and the water thereof was dried up, that the way of the kings of the east might be prepared.” – Rev. 16:12

Now I know the phrase ‘kings of the east’ could refer to any number of nations; India, Russia or China for example. But, if we are indeed very close to the battles in Ezekiel 38, in which the radical Islamic governments are dealt a severe blow, I would bet that China is the chief concern. They have been steadily building their military, specifically designed to counter the U.S. military. Their Generals have even warned their military academies to prepare for chemical and germ warfare against the United States. And they are a chief supplier of chemical warfare to Iran and other rouge nations.

They have stolen American intellectual property and now they are even selling us electronic devices which spy on us in our homes! Michael Pillsbury warns about this in his latest book on the China danger.

The question today is – “Is China our friend?”. To this I reply, “Is China friendly to Christians?”. We make friends with the world at our own peril, and Communism is certainly no friend to American principles, which are founded on Christian teachings. Many in this country are so money hungry that they are willing to do business with the devil if they have to. But, the truth is China is preparing for war with us! China’s own military leaders are warning the Chinese government of having a “peace disease” after so many years without war.

In addition, some top military officials in China have even advocated using nuclear weapons against the United States first in the event of a military conflict between our two countries…

Gen. Zhu Chenghu expressed willingness to abandon China’s “no first use” nuclear weapons policy, to defend its claim over Taiwan and argued that China should use nuclear weapons against the United States should its military interfere. A 2011 editorial in the Global Times (an English edition of the Communist Party of China’s official newspaper) warned that countries involved in sea disputes with China “need to prepare for the sounds of cannons.”

Now I am not speaking against the Chinese people but their communist government. After all, there are many Christians in China, although they have to work mostly underground. We should all be praying that the Chinese military is stripped of their powerful influence on the government and not foolishly believe President Xi Jinping is a friend to America or is in full control of China’s decisions. And remember, it is to their advantage to have a puppet North Korea stir up trouble for the United States and the west, especially as they expand into the China Sea.

Wars will come and rumors of war will abound, but remember it is us, the Church, that has the final say, if we can truly follow Jesus –

“Again, truly I tell you that if two of you on earth agree about anything they ask for, it will be done for them by my Father in heaven. For where two or three gather in my name, there am I with them.” – Matt. 18:18-20

These Scriptures are not talking about the Catholic church, the Lutheran church, the Baptist church, Pentecostal church, Charismatic church, or any other denomination. They are talking to the one true Church – the Church of Jesus Christ. Those who are redeemed by His blood and belong to Him. Those who are not here on earth to do their will but His! They are found in every denomination but, that does not mean all in that denomination are members. If that select group of believers comes together, even if it is just two or three, they have the power of heaven behind them to bind evil on earth and loose good.

The times that are upon us will only be navigated successfully by those in this church. When the latter rain falls, and it will soon, it will empower those in this church to overcome all the devil and the spirit of Antichrist – even the ‘kings of the east’.