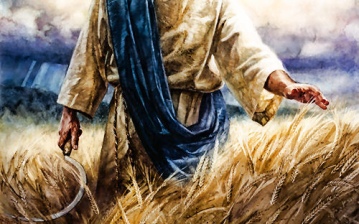 Jesus and the Harvest

As we are nearing the end of the age it would well to remember our roots as a church. Jesus commanded –

“And he said unto them, Go ye into all the world, and preach the gospel to every creature.” – Mark 16:15

This mission was empowered by the receiving of the Holy Spirit, as Peter preached at Pentecost –

“But ye shall receive power, after that the Holy Ghost is come upon you: and ye shall be witnesses unto me both in Jerusalem, and in all Judaea, and in Samaria, and unto the uttermost part of the earth.” – Acts 1:8

Now, 2000 years later, this mission is drawing to a close as every nation has been reached with the Gospel of Good News. Many churches have busied themselves building a kingdom here on earth, but,  Jesus warned when we completed this commission the end would come –

“And this gospel of the kingdom shall be preached in all the world for a witness unto all nations; and then shall the end come.” – Matt. 24:14

But, what will this end look like? Scriptures teach about the Church, that there will be a great ‘falling away’ from the truth –

The world’s standards will be preached instead of the truth of God. Lifestyles of the world will be preferred to Biblical lifestyles. So-called Christians will so taken up with this world’s riches that they will abort their babies and use birth control methods to limit their number of children thus forsaking the very first command God gave to man.

“So God created man in his own image, in the image of God created he him; male and female created he them. And God blessed them, and God said unto them, Be fruitful, and multiply, and replenish the earth, and subdue it: and have dominion over the fish of the sea, and over the fowl of the air, and over every living thing that moveth upon the earth.” – Gen. 1:27,28

Is there no hope for western Christianity? The demographic model is certain but, it does not take God into the account. If the Church will do as Scripture commands and preach the Gospel of the Kingdom to every nation (ethos – race) the trend could be changed.

However, there is another possibility to consider. At the end, after the Gospel has been preached as a witness to every nation, the great ‘catching away (the rapture) will occur –

“For the Lord Himself will descend from heaven with a shout, with the voice of an archangel, and with the trumpet of God. And the dead in Christ will rise first. Then we who are alive and remain shall be caught up together with them in the clouds to meet the Lord in the air. And thus we shall always be with the Lord. Therefore comfort one another with these words.” – 1 Thes. 4:16-18

Even though much of the church has fallen away, there will still be a significant number of believers who will leave this earth in a moment in the rapture, leaving the Muslims to be the dominate group on the earth. They will be left to face the wrath of Almighty God because they chose not to listen to the Gospel of the Kingdom.

“I looked when He opened the sixth seal, and behold, there was a great earthquake; and the sun became black as sackcloth of hair, and the moon became like blood. And the stars of heaven fell to the earth, as a fig tree drops its late figs when it is shaken by a mighty wind. Then the sky receded as a scroll when it is rolled up, and every mountain and island was moved out of its place. And the kings of the earth, the great men, the rich men, the commanders, the mighty men, every slave and every free man, hid themselves in the caves and in the rocks of the mountains, and said to the mountains and rocks, “Fall on us and hide us from the face of Him who sits on the throne and from the wrath of the Lamb! For the great day of His wrath has come, and who is able to stand?” – Rev. 6:12-17

“For this cause everyone who is godly shall pray to You In a time when You may be found; Surely in a flood of great waters They shall not come near him.” – Ps. 32:6