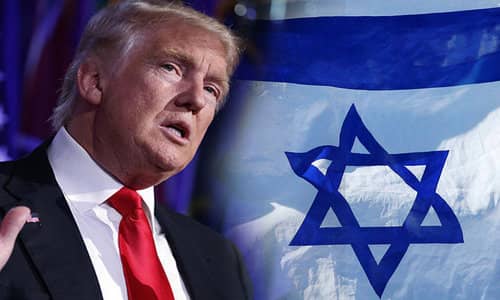 President Trump recognized Israel’s sovereignty over the Golan and the West Bank this week. Even though the UN challenged this move there is little they can do to change it. A significant number of Arab states are going along with it and the US’s economic strength is so overwhelming as to cancel any moves on that front. Militarily, Russia, Syria, Iran and Turkey have had an end-run performed on them. The Golan was the main target for Russia’s focus because of its oil and gas reserves and they were planning on taking it, through the UN if it could, or militarily if need be. Now, all they are left with is a military option – forecasting Ezekiel 38 war of Gog and Magog?

God is wrapping up the ‘last days’ of man on earth.

“God, who at various times and in various ways spoke in time past to the fathers by the prophets, has in these last days spoken to us by His Son, whom He has appointed heir of all things, through whom also He made the worlds;” – Heb. 1:1,2

God saw that the wickedness of man was great in the earth, and that every intent of the thoughts of his heart was only evil continually in Noah’s day. (Gen. 6:5). Paul also writes about these days and tells Timothy “But know this, that in the last days perilous times will come:” Men will be lovers of themselves, lovers of money, boasters, proud, blasphemers, disobedient to parents, unthankful, unholy, unloving, unforgiving, slanderers, without self-control, brutal, despisers of good, traitors, headstrong, haughty, lovers of pleasure rather than lovers of God, having a form of godliness but denying its power. And from such people turn away! (2 Tim. 3:1-5).

Sexual immorality is at an all time high and everyone of Paul’s warnings are showcased in the present day Congress. The love of money is at the top of the list but slanderers are close behind. They bend over backward to pass laws legalizing sexual immorality and lawlessness (against God’s laws). And while many claim to be Christian, they support Planned Parenthood which kills the most innocent among us and many other immoral practices as well.

The Jews are returning to their homeland and Jerusalem is once again coming under Jewish control. Israel took Jerusalem in 1967 but, it wasn’t recognized as the Israel’s capital until this year when Donald Trump moved the U.S. embassy to Jerusalem and declared it to belong to Israel. Israel is beginning to exercise authority over the Temple Mount and plans to rebuild the Temple are being considered. Soon the armies will surround Jerusalem as Jesus foretold.

As a snow avalanche gains speed as it travels downhill,  so world events are speeding up: nations are falling apart and forming new one-world alliances, families are breaking apart under the strain of world views of the Antichrist system, religion is being recast into a mold of oneness – without Christ of course. The Pope recently signed an agreement with the chief Imam of Islam moving ever closer to a one-world religion. Over and over again, the word “God” is used to simultaneously identify Allah and the God of Christianity. Here is just one example…

“We, who believe in God and in the final meeting with Him and His judgment, on the basis of our religious and moral responsibility, and through this Document, call upon ourselves, upon the leaders of the world as well as the architects of international policy and world economy, to work strenuously to spread the culture of tolerance and of living together in peace; to intervene at the earliest opportunity to stop the shedding of innocent blood and bring an end to wars, conflicts, environmental decay and the moral and cultural decline that the world is presently experiencing. ‘

At a time when the worldly church is morphing into Revelation’s “whore of Babylon” of chapter 17, the true church is drawing closer to God and the Gospel of the kingdom is being preached in all the world.

“And this gospel of the kingdom will be preached in all the world as a witness to all the nations, and then the end will come.” – Matt. 24:14

Socialists and Communists claim they have the answer for the world and they can make it better but, experience and the Bible say differently. The world is not getting better, it is getting worse and it will continue to do so until Jesus the King returns and sets it right. He is the King of Peace and there will be no peace without Him!

Jesus forecast these days and He stated –

“And they (Jews) will fall by the edge of the sword, and be led away captive into all nations. And Jerusalem will be trampled by Gentiles until the times of the Gentiles are fulfilled.” – Luke 21:24

The Gentiles are about to be kicked out of Jerusalem signaling the end of the Gentile times. Will you be ready for it?