“Now a great sign appeared in heaven: a woman clothed with the sun, with the moon under her feet, and on her head a garland of twelve stars. Then being with child, she cried out in labor and in pain to give birth.” – Rev. 12:1,2

This sign was seen in the heavens in September, 2017 as the Sun was under the head of Virgo and the Moon was under her feet.

In November of 2016 the planet Jupiter entered the constellation Virgo and went into retrograde. Because of its large orbit compared to earth’s, Jupiter appears to be moving back and forth called retrograde motion. It continues in this retrograde motion until September 23, 2017, a period of 42 weeks minus 1 day, which is a normal human birth cycle, when it leaves Virgo on its trip to the constellation Taurus. Just above Virgo is the constellation Leo which has 9 stars. At this time there are also 3 planets just below Leo, Mercury, Mars, and Venus, thus making the 12 stars that form Virgo’s crown.

It is interesting that November of 2016 also marked the election of Donald Trump to the American presidency. And Trump’s recognizing Jerusalem as Israel’s capital and the moving of the United States Embassy to Jerusalem occurred December 6, 2017. For this the Jewish Sanhedrin minted a silver coin featuring the faces of Cyrus and Trump honoring him as the second Cyrus.

As Jupiter reaches the horns of Taurus, it will be joined by the planet Mars on August 13, 2024, which is the 9th of Av on the Hebrew calendar: a day of trouble for the Jewish nation, the day on which the two previous Temples were destroyed. The Hebrew name for the constellation Taurus is Shur which means ‘coming to judge’. The Hebrew name for Mars is Ma-Adim which means ‘the red one’ or ‘the Son of Man’. Also in the constellation Taurus is a cluster of stars known as the Pleiades which means ‘the congregation’. The clear meaning of this is “The Son of Man comes to judge with His Congregation, or saints.”

Now the interesting thing about this sign is that the time from Jupiter leaving Virgo, Sept. 23, 2017, to the time it goes into conjunction with Mars between the horns of Taurus, August 13, 2024, is exactly 7 years. A time period the prophet Daniel predicts the Antichrist will confirm a treaty with Israel, which he will break in 3½ years.

“Then he shall confirm a covenant with many for one week; But in the middle of the week He shall bring an end to sacrifice and offering. And on the wing of abominations shall be one who makes desolate, Even until the consummation, which is determined, Is poured out on the desolate.” – Dan. 9:27 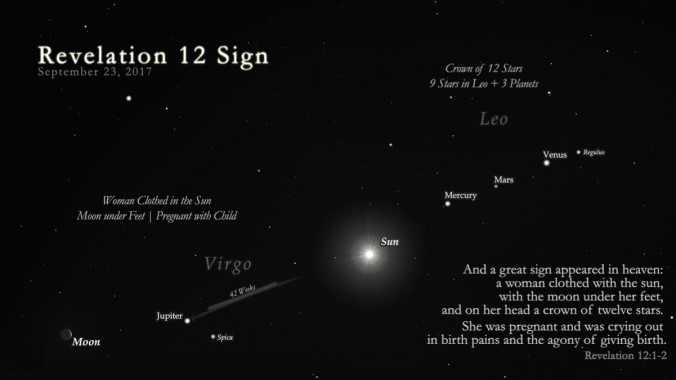 The ‘one week’ Daniel speaks about is of course 7 years. Now, I do not know if this ‘one week’ begins on September 23, 2017 of the Virgo sign or not. Perhaps this sign is just warning us that it is about to begin. But, the fact that this Virgo sign has not occurred before does make one wonder. Also to highlight this sign all the planets of our solar system were in perfect alignment forming a straight line below Virgo on the date Jupiter emerged from Virgo to begin its trip to Taurus.

Since the Antichrist places the Abomination that Desecrates in the Temple in 3½ years, we should expect to see a new Temple in Jerusalem soon. Could this abomination that desecrates be placed on August 2024, the 9th of Av, thus completing this disastrous day?

I have finished this article with a video of these heavenly signs with background music by Day of Eternity. I hope you enjoyed this article.