“Let no one deceive you by any means; for that Day will not come unless the falling away comes first, and the man of sin is revealed, the son of perdition,” – 2 Thes. 2:3

What is this ‘falling away’ Paul is talking about? It is certainly not talking about the people of the world for they have never found Christ from which to fall away. Rather, it is talking about those who claim to be followers of Jesus Christ, leaders in the Christian Church, who once knew Jesus, falling away from the truth Jesus proclaimed. This falling away happens at the end of this age just before the Antichrist is revealed, or along with his revealing.

We are witnessing the beginning of this ‘falling away‘ in our day. Rev. Thomas Brown, who is married to a fellow priest, was ordained as a bishop of the diocese of Maine in the Episcopal Church June 22. Immediately following his ordination, Brown referred to God as a “she” twice in the Nicene Creed. Homosexuals and lesbians are being ordained as priests and pastors of churches and evangelical leaders are proclaiming that we must recognize the LGBT community as legitimate, even though the word of God condemns them –

“Do you not know that the unrighteous will not inherit the kingdom of God? Do not be deceived. Neither fornicators, nor idolaters, nor adulterers, nor homosexuals, nor sodomites,” – 1 Cor. 6:9

A Drag-queen preaches the LGBT message to a Presbyterian Church in Cincinnati while a California pastor introduces the false gospel of Chrislam to the church. Chrislam is the doctrine that claims Muslims worship the same god as Christians do. in other words Allah and God Almighty, the God of the Bible, are the same. This is not what God says of Himself –

But perhaps the most damaging heresy in the church is that of ‘sloppy agape’ and ‘greasy grace’ that is so prevalent today. The phrase “God loves a sinner” is freely spouted forth when it should be “God loves a sinner who repents”! Another phrase is “Grace covers all” when it should be “Grace leads to holiness”! It is by God’s grace that we are called into salvation. It is Grace that empowers us to stop sinning and live a sanctified life of holiness. If it doesn’t do this, then it is what Paul calls “grace in vain”.

“We then, as workers together with him, beseech you also that ye receive not the grace of God in vain.” – 2 Cor. 6:1

This is what Scriptures tell us about God’s Grace –

“For if we sin wilfully after that we have received the knowledge of the truth, there remaineth no more sacrifice for sins, But a certain fearful looking for of judgment and fiery indignation, which shall devour the adversaries. He that despised Moses’ law died without mercy under two or three witnesses: Of how much sorer punishment, suppose ye, shall he be thought worthy, who hath trodden under foot the Son of God, and hath counted the blood of the covenant, wherewith he was sanctified, an unholy thing, and hath done despite unto the Spirit of grace? For we know him that hath said, Vengeance belongeth unto me, I will recompense, saith the Lord. And again, The Lord shall judge his people. It is a fearful thing to fall into the hands of the living God.” – Heb. 10:26-31

I thank God for His Grace because without it I would be lost. It leads me ever closer to Jesus Christ as I obey the calling of the Spirit of grace. That is true Grace, it leads us to be more like Jesus.

So, to the churches that say you can take Communion while you continue sinning, I cry HERESY! You are ‘counting the blood of the covenant, wherewith he was sanctified, an unholy thing’. To members of Congress who continue voting for pro-abortion laws or the LGBT agenda and claim to be Christian, I cry HYPOCRITES! 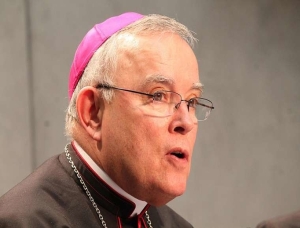 “In his column, Chaput also referenced a talk he gave at Notre Dame in October 2016, just prior to a presidential election that “seemed sure to put a second Clinton in the White House.” In that talk, Chaput noted that the “price” of entry into elite political classes for Catholics has, in many cases, “been the transfer of our real loyalties and convictions from the old Church of our baptism to the new ‘Church’ of our ambitions and appetites.”

While he pointed to examples such as Nancy Pelosi, Anthony Kennedy, Joe Biden, and Tim Kaine, Chaput noted that those people “are not anomalies. They’re part of a very large crowd that cuts across all professions and both major political parties.”

Those who forsake their beliefs, and what is right, commit what Pope Benedict XVI called a “silent apostasy,” a Greek term for “a means to revolt or desert; literally ‘to stand away from,’” Chaput noted.

“For Benedict, laypeople and priests don’t need to publicly renounce their baptism to be apostates. They simply need to be silent when their faith demands that they speak out; to be cowards when Jesus asks them to have courage; to ‘stand away’ from the truth when they need to work for it and fight for it,” Chaput said.”

The great falling away has begun and another Gospel is being preached in the false church. How can you tell if you are hearing a false gospel? Take the time to read the words of Jesus – they are the red words in the Books of Mathew, Mark, Luke and John. How does what you are hearing preached match up with the words of Jesus? You will soon be able to recognize the false words.

This ‘falling away’ will usher in the coming of the ‘man of sin’, the lawless one, “Even him, whose coming is after the working of Satan with all power and signs and lying wonders, And with all deceivableness of unrighteousness in them that perish; because they received not the love of the truth, that they might be saved. And for this cause God shall send them strong delusion, that they should believe a lie: That they all might be damned who believed not the truth, but had pleasure in unrighteousness.” (2 Thes. 2:9-12).

I pray better things for you who read this article. I ‘give thanks always to God for you, brethren beloved of the Lord, because God hath from the beginning chosen you to salvation through sanctification of the Spirit and belief of the truth:’

One thought on “The Great Falling Away”