My last article was titled Behold, the Darkness and the Light and I attempted to show that the grey which separates the darkness from the light is getting smaller and smaller. It is harder for a person to remain in the grey area these days, you must choose – darkness or light.

The United States is under attack from leftists who don’t like God, or His truth and thus don’t like the way America was founded, a Republic founded on Christian principles. The very first Amendment to our Constitution has to do with religion.

“Congress shall make no law respecting an establishment of religion, or prohibiting the free exercise thereof; or abridging the freedom of speech, or of the press; or the right of the people peaceably to assemble, and to petition the Government for a redress of grievances.” 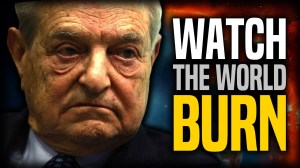 But, the leftists want to prohibit Christians from freely exercising their constitutional rights by not mentioning God in public, or posting His Ten Commandments in public, or even to mention Jesus in public discourse, which of course abridges our freedom of speech. Because our current President has dared to publicly mention God and Jesus these leftists are hemorrhaging with their venom. Chief among them is George Soros, a  notorious globalist billionaire who has gone on the record threatening to “take down President Trump” and promising an audience at the World Economic Forum in Davos that the New World Order are making the necessary preparations to completely and utterly obliterate every single Republican plan. He funds 187 groups which are dedicated to taking America down. Some of the names on this list will shock you… Abortion groups, open borders advocates, immigrant activists, groups to change the way we vote, socialist health care, climate change, “Catholics”, Socialists and Communists. Democrat leadership in the House willingly promotes them calling Pro-Lifers dumb.  But, they cannot win for they are driven by the spirit of Antichrist and we will win in the end –

“And they (Christians) overcame him (Satan and his Antichrist) by the blood of the Lamb and by the word of their testimony, and they did not love their lives to the death.” – Rev. 12:11

The Light that empowers true believers is already beginning to shine. The Greatest Movement of Muslims Turning to Christ Is Happening NOW. Christians in Poland Declare: “Jesus Christ Is Our King, Muslims Should Leave Us”. In Nigeria, a Nigerian Muslim Imam claims “Jesus knocked on my door” and becomes a Christian. He now pastors a Christian Church. There are thousands of stories like this happening right now. Even in the United States, Christians are beginning to wake up and separate Jesus and His teachings from the politically correct nonsense that is flooding over us. A Catholic Priest tells Joe Biden “You can’t be Catholic and support abortion”. Even the young are beginning to wake up to the truth that Jesus alone gives as this video shows –

The Light is shinning and its time to choose whether you will go with the light or stay in the darkness. If you try to hide in the grey area you should know that Jesus will spew all those who are lukewarm out of His mouth.