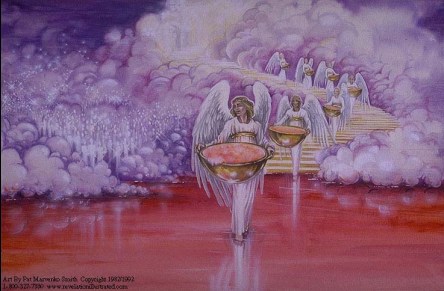 “Then I heard a loud voice from the temple saying to the seven angels, “Go and pour out the bowls of the wrath of God on the earth.” – Rev. 16:1

After John gives us a glimpse of the end in chapters 14 and 15, he continues with the details of that end. I believe these seven bowls of God’s wrath are the results of the sounding of the seven angels with trumpets. The Trumpets stand for the announcement of God’s intentions and the Bowls are the results.

“The first angel sounded: And hail and fire followed, mingled with blood, and they were thrown to the earth. And a third of the trees were burned up, and all green grass was burned up.” – Rev. 8:7

“So the first went and poured out his bowl upon the earth, and a foul and loathsome sore came upon the men who had the mark of the beast and those who worshiped his image.” – Rev. 16:2 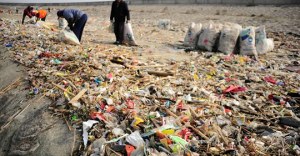 China dumped 27 percent more trash into the ocean in 2018

This is the only sequence that doesn’t match exactly but, it could be that some bacteria that attacks green plants also affects those with the mark of the beast. Or it could be that the rule of the Beast unleashes this plague upon the green plants. For example, both Russia and China are the leading polluters of the world’s environment. It is interesting that only 1/3 of the trees and grass are affected. Does this mean that the Antichrist government will only cover 1/3 of the earth? Like Hitler of Germany, not all were Nazis but all were affected by his rule.

“Then the second angel poured out his bowl on the sea, and it became blood as of a dead man; and every living creature in the sea died.” – Rev. 16:3 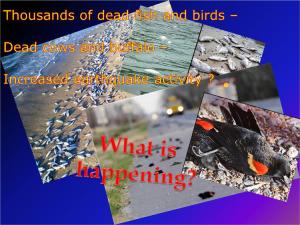 When the second Trumpet sounds 1/3 of the sea became blood and 1/3 of the creatures died but when the second Bowl was poured out the sea became blood and all the creatures died. Why the difference? Either they are two separate events or this represents a progressive judgment beginning with 1/3 and progressing to all if there is no repentance. Is this what the mass die-offs that began in 2010 and continue to today are all about? A warning of what is coming?

“Then the third angel sounded: And a great star fell from heaven, burning like a torch, and it fell on a third of the rivers and on the springs of water. The name of the star is Wormwood. A third of the waters became wormwood, and many men died from the water, because it was made bitter.” – Rev. 8:10, 11

“Then the third angel poured out his bowl on the rivers and springs of water, and they became blood. And I heard the angel of the waters saying: “You are righteous, O Lord, The One who is and who was and who is to be, Because You have judged these things. For they have shed the blood of saints and prophets, And You have given them blood to drink. For it is their just due.” – Rev. 16:4-6 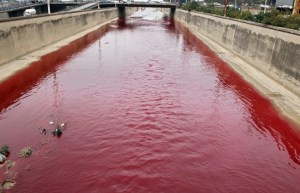 In 2012 several rivers around the globe turned mysteriously red, such as the river in Beirut Lebanon. Is this a warning of things to come?

“Then the fourth angel poured out his bowl on the sun, and power was given to him to scorch men with fire. And men were scorched with great heat, and they blasphemed the name of God who has power over these plagues; and they did not repent and give Him glory.” – Rev. 16:8, 9 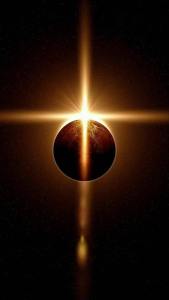 I went to High school in Juneau Alaska and in the winter, I would go to school in the dark and come home in the dark. That was due to the tilt of the earth and its rotation, but this plague speaks of something different. Both the Trumpet angel and the Bowl angel affect the Sun and stars but one produces diminishing light and the other increased heat. Now both light and heat are forms of energy so, something is happening to the energy production of the Sun and stars. Does the light diminish with the Trumpet announcement but increase with Bowl outpouring? Whatever physics is involved God will do it just as He says. 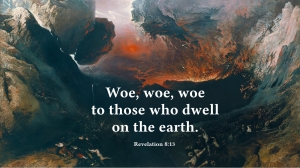 After the 4th angel sounds his Trumpet another angel flies through the midst of heaven saying, “Woe, woe, woe to the inhabitants of the earth because of the remaining blasts of the Trumpet of the three angels who are about to sound.” The wrath of God evidently shifts to a new level of intensity for the last three angels or they herald the shortness of time remaining before God’s final judgment on the earth.

“Then the fifth angel sounded: And I saw a star fallen from heaven to the earth. To him was given the key to the bottomless pit. And he opened the bottomless pit, and smoke arose out of the pit like the smoke of a great furnace. So the sun and the air were darkened because of the smoke of the pit. Then out of the smoke locusts came upon the earth. And to them was given power, as the scorpions of the earth have power.” – Rev. 9:1-3

“Then the fifth angel poured out his bowl on the throne of the beast, and his kingdom became full of darkness; and they gnawed their tongues because of the pain. They blasphemed the God of heaven because of their pains and their sores, and did not repent of their deeds.” – Rev. 16:10, 11

When the bottomless pit was opened scorpion like demons came out with the power to torment men who have the mark of the Beast for 5 months. Although men will try to commit suicide from the pain, death will flee from them. These demons have a king over them whose name is Abaddon in Hebrew but Apollyon in Greek. But for all this, these people repented not.

“Then the sixth angel sounded: And I heard a voice from the four horns of the golden altar which is before God, saying to the sixth angel who had the trumpet, “Release the four angels who are bound at the great river Euphrates.” So the four angels, who had been prepared for the hour and day and month and year, were released to kill a third of mankind. Now the number of the army of the horsemen was two hundred million; I heard the number of them.” – Rev. 9:13-16

“Then the sixth angel poured out his bowl on the great river Euphrates, and its water was dried up, so that the way of the kings from the east might be prepared. And I saw three unclean spirits like frogs coming out of the mouth of the dragon, out of the mouth of the beast, and out of the mouth of the false prophet. For they are spirits of demons, performing signs, which go out to the kings of the earth and of the whole world, to gather them to the battle of that great day of God Almighty. … And they gathered them together to the place called in Hebrew, Armageddon.” – Rev. 16:12-14

I feel the 6th angel signals the time of the great battle called Armageddon. It is during this battle that the Lord gives the word, “Behold, I am coming as a thief. Blessed is he who watches, and keeps his garments, lest he walk naked and they see his shame.” (Rev. 16:15).

As the seventh angel prepares to sound an angel declares

” the mystery of God would be finished, as He declared to His servants the prophets.” – Rev. 10:7

Then one of the Bowl angels comes and talks with John filling in details of events happening before and during and after the battle of Armageddon, such as the judgment of Mystery Babylon and the capturing of the Antichrist and the false prophet and throwing them into the lake of fire. I will cover these events in a subsequent article.

Remember, in the beginning of Revelation Jesus was introduced as the Alpha and the Omega, the beginning and the end. As the seven Bowl angels pour out their bowls of God’s wrath on rebellious mankind, the end is at hand. These seven angels are God’s warning that the end is near and Scripture warns –

“Seek the LORD while He may be found, Call upon Him while He is near. Let the wicked forsake his way, And the unrighteous man his thoughts; Let him return to the LORD, And He will have mercy on him; And to our God, For He will abundantly pardon.” – Isa. 55:6, 7

If you are wise, you will do business with God now before these angels begin their work.