I want to take a while off from Revelation and think about this last year. It has been one year this last January 21st. since my dear wife’s going to be with Jesus. In that same year I lost my third son, Israel, also. But, my loss is heaven’s gain and I am so thankful to have been given the privilege to have known Anita and Israel. Anita always had a heart for God from the first of our marriage of 60 years. She was truly a righteous woman, always caring for her family of eight children, and me but, still finding time to care for the downtrodden as well, much more so than I. I was a teacher and didn’t make much money so she was constantly on the lookout at thrift sales for clothes for the children. And she always seem 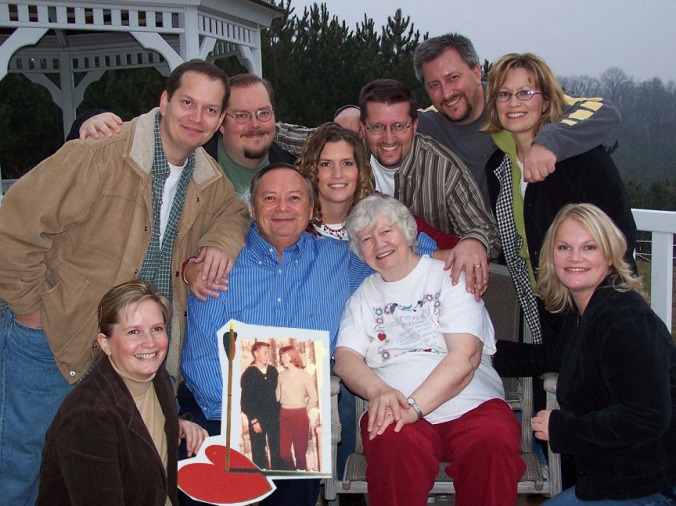 to also find neat things for gifts as well. She also was an astute manager of what little money we had and all eight of our children were able to attend college, many becoming teachers, as she was before children forced her retirement. In all her activities she was constant in her fellowship and support as we sought the Lord together. I miss her so much.

While each of my children are special and dearly loved I will talk about Israel as he has gone home to be with the Lord now. In my minds eye I see him as a little boy sitting by our kitchen window looking out into the woods and asking Anita, “where are the olden days mama, are they way out in the woods?” His analytical mind was working even then. He was later to become a lawyer, working for several Banks and having his own law office.

But, his true heart was always after the Lord and is reflected in the book he wrote named Three Red Lions, The Flame of Ram. The description reads – “For centuries, an ancient evil has slept shrouded in darkness beneath the ruins of a forgotten civilization. Now a tyrant has arisen across the western ocean whose thirst for knowledge and power threatens to unleash this wickedness. When the king of the Emerald Isle receives a powerful vision warning of the encroaching danger, he sends his three sons, Aedan, Bryn, and Llew across the unknown waters to discover the truth.” It is an analogy about our struggle against the devil and his evil plans for this world.

In later years, I used to love sitting at his kitchen table arguing about theological questions, challenging his assumptions and he mine. Although, the truth is, we were never very far apart. His last year, as he battled colon cancer, he wrote this song which his children produced,

His children have carried on, writing and producing songs that can be found on Youtube under the heading Day of Eternity.

As his children struggled with Israel’s sickness, he encouraged them in their faith and they wrote and produced this song This is the Morning.

They have continued writing and producing songs, such as this one by Stephen Cooley,

I have often thought of Israel and his thoughts and payers in those last days. With Anita, she had a heart attack and it was over quickly but, with Israel, it was drawn out and painful. But, I have received comfort from this song written by his son Micah, Beside Me.

Our times are indeed in God’s hands as King David wrote. Too often we forget to treasure each moment we are given and are taken up with the cares of this world. And then, all of a sudden, all we are left with is memories. I pray that you will take some time out of your busy life to treasure the loved ones you have been given, while you have them, so when you  are parted, your memories can be sweet.

One thought on “Memories”