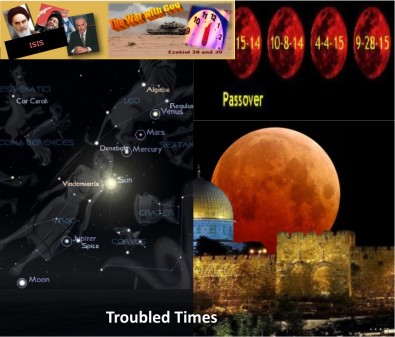 I wrote this article in 2016 but I felt it was time to repost it. Many events have happened since then such as the fulfillment of the Revelation 12 sign of Virgo, the U.S. recognition of Jerusalem as the eternal Capital of Israel, Israel’s recognition of President Trump as the 2nd. Cyrus, to name a few. Also, as the Church has further embraced the morals of the world it has become dull of hearing.

As turmoil and confusion sweeps through the nations of the world, it would be wise to consider that God Almighty has a plan for the nations and the peoples. It was in place from the Creation and it is working even now. No nation or people group is left out. God has not hidden His plan; it is written in the heavens and proclaimed by His prophets down through the centuries. In our time, it is beginning to be fulfilled. We would be wise to consider and accept it.

“And he shall set up an ensign for the nations, and shall assemble the outcasts of Israel, and gather together the dispersed of Judah from the four corners of the earth.” – Isaiah 11:12

For 1000’s of years mankind has been laboring under the delusion that they can control their destiny without God’s oversight. The junk heap of history gives testimony to their folly. God has a plan for His creation and He has a destiny for the nations He called into being. The Bible declares He even sets their boundaries –

“When the Most High divided their inheritance to the nations, When He separated the sons of Adam, He set the boundaries of the peoples According to the number of the children of Israel.” – Deuteronomy 32:8

“And He has made from one blood every nation of men to dwell on all the face of the earth, and has determined their preappointed times and the boundaries of their dwellings” – Acts 17:26

God has used the tiny nation of Israel as a warning to the nations that His clock is nearing Midnight – their return to Land of Israel is like a flag waving to alert the nations – there is not much time left!

God even went so far as to provide a calendar for us to rehearse and prepare for the fulfillment of His plan. It consists of 12 thirty-day months and every 13 years a 13th month is added. But this calendar is just the framework for seven yearly appointed times when God makes a special effort to meet with His people,

those who have covenanted with Him. These appointed times are called The Feasts of the Lord. Four of them occur in the Spring of the year: Passover, Unleavened Bread, First Fruits, and Weeks (Pentecost). The last three occur in the Fall, in fact in the seventh month of the year; Trumpets, Day of Atonement, and Tabernacles. These seven feasts remind God’s people of the most important aspects of our covenant with Him –

These feasts are not only times of remembrance and preparation but they also act as a prophetic clock telling the time of God’s moving to fulfill His plan. When Jesus came to earth the first time, His ministry fulfilled the first four Feasts exactly on the appointed time of each feast.

Now, if He fulfilled the first four Feasts exactly with His first coming, it is probable that He will fulfill the last three Feasts with His second coming. This is even more likely as we have been warned by the rare Biblical Blood Red Moon Tetrad occurring on the Feasts of Passover and Tabernacles in the years, 2014 and 2015 ( only the eighth one since Jesus was hanging on the Cross 2000 year ago). This is further accentuated by the fact that this year introduced the Jubilee year just as the year Jesus began His earthly ministry so long ago.

The heavens continued showing us signs of His soon return as the Revelation 12 sign of the woman giving birth was fulfilled in the constellation Virgo in 2016 and 2017 and all the planets of the solar system were lined up in a straight line below her for the first time in 6000 years. In 2017 the nation of Israel celebrated the 70th anniversary of its rebirth

and President Trump proclaimed Jerusalem its eternal Capital and moved the U.S. Embassy to Jerusalem. The Sanhedrin Priests in Israel proclaimed him the 2nd Cyrus and minted a coin in his honor. These and other political and religious signs point to the soon return of Jesus.

Only God knows for sure when Jesus will come again but, He alone has set His calendar and shown these heavenly signs and Feast days to warn us to be ready. As the Feast of Trumpets will occur this next Sept 19-20, it once again is warning of trouble in the world and in Israel, and once again is alerting us to get ready for the rapidly approaching judgment.

Remember, after the Feast of Trumpets there were only 10 days to get right with God before He opens the Book of Life in heaven. Scripture declares, “Seek the Lord while He may be found”. Once the Books of judgment are opened in heaven on the Day of Atonement, your destiny is sealed. I pray we will all be ready.