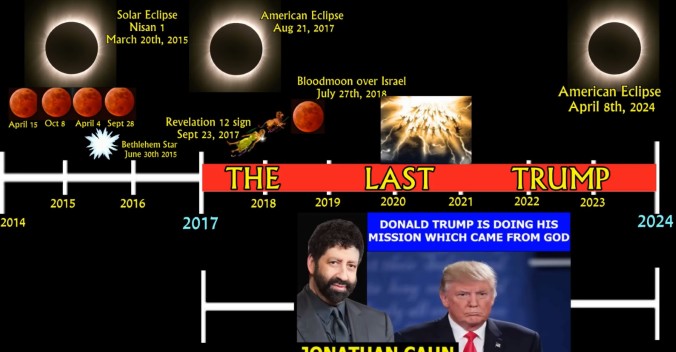 In Luke 21 Jesus predicts our times –

“When you hear of wars and disturbances, do not be terrified; for these things must take place first, but the end does not follow immediately.” Then He continued by saying to them, “Nation will rise against nation and kingdom against kingdom, and there will be great earthquakes, and in various places plagues and famines; and there will be terrors and great signs from heaven.” – Luke 21:9-11

There have always been wars and rumors of wars, in fact the earth has seen very few years of “peace on the earth and good will toward men”. But Jesus also warned that these signs would be like birth pangs, which get more frequent and stronger as the birth approaches.

Beginning with the 20th an 21st Centuries we saw the first and second world wide wars develop. And we also saw the spirit of Antichrist at work to set up a world wide government as the United Nations was established. Jesus also predicted there would be great earthquakes and while there have been many large earthquakes in the past, it is only recently that their frequency has been exponentially rising. as this graph put out by the United States Geological Service clearly shows.

Jesus also mentioned plagues and famines. A group of scientists have formed the  Famine Early Warning Systems Network (FEWS NET) and they are raising alarms about famine in various parts of the world.

“From 2015 to 2019, the global number of people at risk of famine rose 80% to some 85 million—more than the population of Germany. Wars in Yemen, Syria, and Sudan are the biggest driver of the spike. Global warming, and the droughts and storms it encourages, also plays a role. The pace and severity of storms and droughts in Africa seem to be increasing, Funk says. “Both extremes are going to get more intense.” 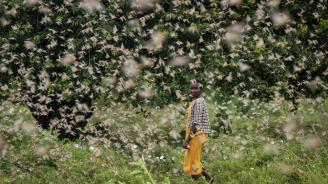 Farmer watches his field being destroyed by Locusts

But then He goes on to include “and there will be terrors and great signs from heaven”. And we have certainly had these. Beginning in 2010 birds started falling from the skies, fish started washing up on the shores, deer and cows started dropping dead, and strange sounds began in the earth and in the heavens.

When these things first started happening the news media covered them but ‘old news is no news’ to the media and even though they continue happening the media seldom covers it now. The earth has even shifted on it’s axis causing strange weather patterns to develop. The Inuit Indians of northern Canada first brought attention to this problem.

In 2012 the birds started falling from the sky and the fish started dying, and it continues today, and in 2014 and 2015 we had four blood red moons that occurred on Jewish feast days of Passover and Tabernacles. This is only the 8th time since the time of Jesus this

has happened. Each time they happened portended great trouble for Jews and the people of the world. They are given to draw our attention back to God and Jesus, as He was hanging on the cross during the first Blood Red Moon Tetrad. In 2016 the planet Jupiter, known as the King Planet, entered the womb of the Constellation Virgo where it went into retrograde for 42 weeks minus a day, which is the normal gestation period for a human baby, before it exited on September 23, 2017 making its way to the Constellation Taurus, where it will meet Mars on August 13, 2024, which is 7 years. When Jupiter exited Virgo, all the planets of our solar system were aligned in a straight line underneath Virgo for the first time in 6000 years. This heavenly sign fulfilled the prophesy of Revelation 12.

“Now a great sign appeared in heaven: a woman clothed with the sun, with the moon under her feet, and on her head a garland of twelve stars. Then being with child, she cried out in labor and in pain to give birth.” – Rev. 12:1, 2

By the way, the rest of that sign was also fulfilled as the Constellation Draco (the Red Dragon) stood above Virgo to devour her child. You can red further details on Draco in Standing Against the Devil.

“And another sign appeared in heaven: behold, a great, fiery red dragon having seven heads and ten horns, and seven diadems on his heads. His tail drew a third of the stars of heaven and threw them to the earth. And the dragon stood before the woman who was ready to give birth, to devour her Child as soon as it was born. She bore a male Child who was to rule all nations with a rod of iron. And her Child was caught up to God and His throne.” – Rev. 12:3-5 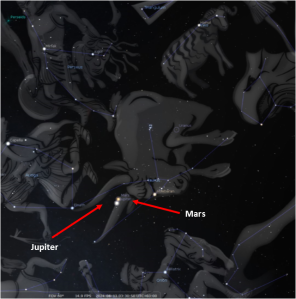 The male Child, Jesus, was caught up to God where He is readying His return. Another heavenly sign forecast this as Jupiter speeds through the heavens to arrive between the horns of Taurus, known in Hebrew as Shur, the Coming Judge. Where it will meet Mars, known in Hebrew as Ma-adim or the Son of Man on August 13, 2024. Taurus also contains a star cluster known as the Pleiades or the Congregation. The meaning of this conjunction is “The Son of Man comes with His Church to Judge the Earth.”

But perhaps the strongest soon coming sign that will occur will be the sign of Wormwood which will happen in April 2029, only nine years away. I will let the man who got this revelation from the Lord tell you its story.

The Decade of 2020 could very well be the final decade before the Antichrist appears. God has certainly given us a plethora of signs to warn us to get ready. And now the spirit of Antichrist has the Corona virus to aid in its efforts to convince people of the need for a One World Government and the need to yield their First and Second Amendment rights to government control and social distancing. Emanuel Macron of France and the Pope and the UN are leading the charge for a one world government and Bill Gates and WHO are leading the charge to receive  a vaccination that will include a chip. I’ve heard that the digital code of this immunization chip will be 060606. The motivating forces behind these moves are Control and Money, exactly what Revelation says the Antichrist will try to do.

“He causes all, both small and great, rich and poor, free and slave, to receive a mark on their right hand or on their foreheads, and that no one may buy or sell except one who has the mark or the name of the beast, or the number of his name. Here is wisdom. Let him who has understanding calculate the number of the beast, for it is the number of a man: His number is 666.” – Rev. 13:16-18

Whether or not this will be the Mark of the Beast it is certainly preparing people to receive such a mark. But perhaps the most shocking forecast Jesus made was concerning Jerusalem.

“And Jerusalem will be trampled by Gentiles until the times of the Gentiles are fulfilled.” – Luke 21:24 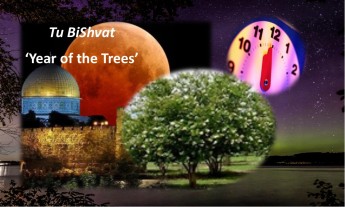 The Year of the Temple

It is true, Jerusalem has been trampled by Gentiles until this time. Even though Israel won Jerusalem back in 1967, the Temple Mount remains under Gentile control and Jerusalem is not Jerusalem without the Temple Mount. But, on December 21, 2017 President Trump declared Jerusalem is the Capital of Israel and from that time Israel has begun to take control of the Temple Mount. As long as the Muslim Mosque is there and the Jewish Temple is not however, the Gentiles still are trampling Jerusalem. But, Israel has begun planning the Temple to be re-established and it soon will be. I believe when this happens the 7 year treaty of the Beast will begin. (That’s just my opinion, of course.)

Anyway, God has been showing us signs and Jesus said ““Now when these things begin to happen, look up and lift up your heads, because your redemption draws near.”