When I was in the Navy, I had a friend on the ship I served on who became a Catholic and I used to argue with him about the Catholic faith. One day I asked him why he became a Catholic. His answer startled me. He said, “I don’t know if it is correct or not but, it is a good insurance policy.” Now, I don’t know if you are a Catholic, Protestant, Pentecostal, or Charismatic, I hope your reason for being that is based on more than just having an insurance policy because God doesn’t sell insurance. God doesn’t invite you into a Religion and God doesn’t have any grandchildren, He only has children. You are called to meet His Son, Jesus the Christ, and to have a relationship with Him. Paul wrote –

“Finally, there is laid up for me the crown of righteousness, which the Lord, the righteous Judge, will give to me on that Day, and not to me only but also to all who have loved His appearing.” – 2 Timothy 4:8

Paul walked with God, obeyed the Holy Spirit, and became ever so close to Jesus. He knew his life would result in receiving a crown of righteousness which the Lord would give him because he “loved His appearing”. How about you? Are you so comfortable with Jesus that you are longing for His return? Can you say with Titus that you are –

“looking for the blessed hope and glorious appearing of our great God and Savior Jesus Christ,” – Titus 2:13

Many Christians claim the “Grace alone” message to cover their sinful lifestyles or lukewarm attitudes toward Christ. But Titus writes “that the grace of God that brings salvation teaches us to deny ungodly and worldly lusts and to live soberly, righteously and godly in this present age.” When we have this kind of grace, we will be looking for the blessed hope and glorious appearing of our great God and Savior Jesus Christ. This same Jesus gave Himself for us that He might redeem us from every lawless deed and purify for Himself His own special people, zealous for good works.

One who is looking for the blessed hope can’t be involved in shady business dealings, can’t lie to his neighbors or can’t be having adulterous affairs. He can’t be supporting with his vote the right to abortion or the right to live a LGBT lifestyle when God calls it an abomination. Or he can’t be like the people of Noah’s day who witnessed the wickedness going on around them and still went on living as though nothing was wrong. 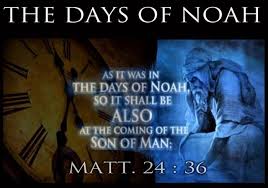 They heard Noah’s preaching for 120 years but they didn’t act on it. He told them a flood was coming but, they ignored him. They weren’t looking for the blessed hope and the soon appearing of Jesus. They didn’t live their lives as those who were expecting the soon coming of the Lord.

Many churches today are preaching a feel good Gospel and presenting a Hill Song type of musical worship promising prosperity to all who will come. They emphasize the Love of God without any repentance. But Jesus defined the love of God differently –

“He who has My commandments and keeps them, it is he who loves Me. And he who loves Me will be loved by My Father, and I will love him and manifest Myself to him” – John 14:21

This is true love. Many today have received visions and dreams and near death experiences in which Jesus warned them of His soon coming. If you are not longing for it, there is something wrong. The last message in the Bible is –