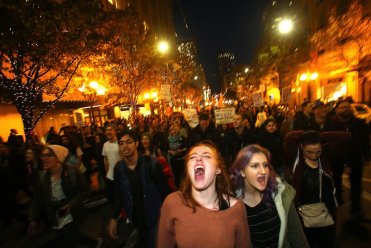 As cities across the nation cave in to rioters and anarchists, we as Christians need to be in prayer more than ever before. Scriptures warn us that “But know this, that in the last days perilous (fierce) times will come: For men will be lovers of themselves, lovers of money, boasters, proud, blasphemers, disobedient to parents, unthankful, unholy, unloving, unforgiving, slanderers, without self-control, brutal, despisers of good, traitors, headstrong, haughty, lovers of pleasure rather than lovers of God, having a form of godliness but denying its power. And from such people turn away!” (2 Tim. 3:1-5).

All of these terms apply to us today. Many of the rioters are young people who are ‘disobedient to parents’ and certainly ‘unthankful’ for the blessings they have been given and not earned. Many of the rioters belong to groups that are paid by George Soros, such as Black Lives Matter. These rioters are ‘without self control’ and they are ‘despisers of good’. Also I notice that most of these riots are taking place in cities and states controlled

by Democrats who are using them for political gain. They want to bring down any success President Trump can lay claim to for bettering the economy so they are using these riots as well as the Covid19 virus to shut it down. They are also calling for the dismantling of the police, not because they don’t see the need for police, but because once the police are gone they will be able to install their own police who will follow their command, much like Hitler’s Brown Shirts. And many churches are

also complicit in this shut down by taking money from the government to remain closed. They have ‘a form of godliness but deny its power’.

Then there are also those sexually immoral politicians and leaders who are accused and convicted of having sex with minors and children. The list is too long to be written here but can be found in this article – List Of All US Politicians Charged Or Convicted of Sex Crimes Against Minors. This list includes both Republicans and Democrats but it doesn’t include those who are accused of molesting minor children. They were and are in positions of leadership making and enforcing the laws we all have to live by. But they don’t live by the law God lays down but, they will have to face His judgement soon.

“as Sodom and Gomorrah, and the cities around them in a similar manner to these, having given themselves over to sexual immorality and gone after strange flesh, are set forth as an example, suffering the vengeance of eternal fire.” – Jude 1:7

The Lord Jesus Christ is going to return to judge the earth. I don’t know exactly when but, I’m 83 now and I expect to see His return. Here is what He says about His return –

“Many will say to Me in that day, ‘Lord, Lord, have we not prophesied in Your name, cast out demons in Your name, and done many wonders in Your name?’ And then I will declare to them, ‘I never knew you; depart from Me, you who practice lawlessness!’” – Matt. 7:22, 23

This is one of the most frightening verses in the Bible for many who claim to be Christians will fall into this category and miss heaven. Jesus wants those who will not take credit for doing the works of God, for what gifts do they have that they did not receive?  It is time for us to repent and seek God while He may be found. James writes that –

“God resists the proud, But gives grace to the humble.” – James 4:6

So, I will leave you with Paul’s word to Timothy –

“Nevertheless the solid foundation of God stands, having this seal: “The Lord knows those who are His,” and, “Let everyone who names the name of Christ depart from iniquity.” – 2 Tim. 2:19