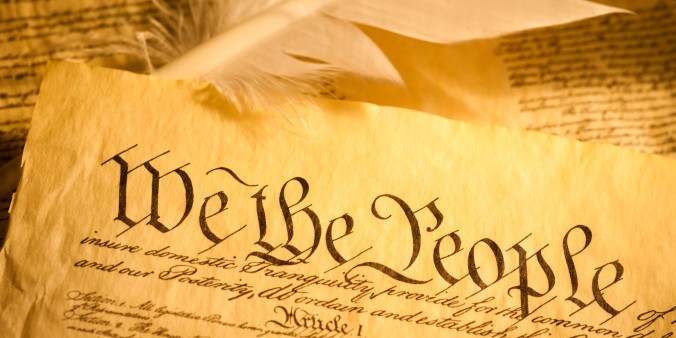 American Declaration of Independence with quill and parchment.

Our Declaration of Independence begins with these words –

“We hold these truths to be self-evident, that all men are created equal, that they are endowed by their Creator with certain unalienable rights, that among these are life, liberty, and the pursuit of happiness.“

This document was penned by men who believed in God and understood the our liberty comes from Him. America was founded to be a sort of Jubilee (setting free) for mankind, as Scriptures proclaim –

In fact, the famous Liberty Bell,  a traditional symbol of U.S. freedom, was commissioned in 1751 by the Pennsylvania Provincial Assembly to hang in the new State House (renamed Independence Hall) in Philadelphia.  It bears the motto, “Proclaim liberty throughout all the land unto all the inhabitants thereof”.

The Bible is all about Liberty. God comes to the people to set them free from captivity, captivity to human avarice and captivity to the Devil. Jesus proclaimed –

“The Spirit of the LORD is upon Me, Because He has anointed Me To preach the gospel to the poor; He has sent Me to heal the brokenhearted, To proclaim liberty to the captives And recovery of sight to the blind, To set at liberty those who are oppressed;” – Luke 4:18

Indeed most of the New Testament, which is a product of the workings of the Holy Spirit, is about Liberty. The Apostle Paul proclaimed –

But, our country is now under attack from forces that want to steal our Liberty. These forces are embedded in our news media, our educational system, and even in our government. They have invented a new name for themselves – the woke generation, to attract and deceive the younger generation. A local college just released a promotional video that displays their agenda.

They are for everything the Bible is against and that includes the concept of liberty. Their philosophy is, if you don’t agree with them they will “cancel” you. Your rights cease to exist, your property ceases to exist, you cease to exist. They call good bad and evil good. Unfortunately, they have found a place of acceptance in the new Democrat Party, which either agrees with them or just ‘looks the other way’ at their actions. which includes rioting, burning, looting, and violence.

But, there is a group of Americans that are beginning to wake up and speak out. They are mostly Christians but, not all, they just appreciate the Liberty given to us by the Constitution. They recently released a new video named America, America, God Shed His Grace on Thee.

Please listen to this and then act. This election is about more than just electing a President. It is about choosing a way of life; the American way, or the Socialist/Marxist way. One leads to Liberty, the other is about bondage. If you don’t believe me, just look at history or just ask someone who grew up under Socialism/Marxism. There is no Liberty there.