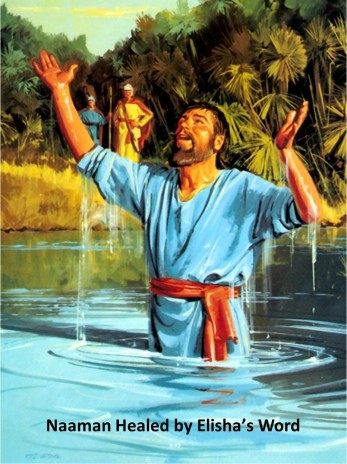 I awoke this morning and after getting dressed I prayed and read the Bible. I felt the Holy Spirit telling me to read 2 Kings chapter 5. It is the story of the Syrian army commander Naaman who had leprosy. The story begins with a military raid in which a young Israeli girl was taken captive and ended up serving Naaman’s wife. Instead of being biter about her slavery, she used the opportunity to spread the good word about the Lord:

“Then she said to her mistress, “If only my master were with the prophet who is in Samaria! For he would heal him of his leprosy.” – 2 Kings 5:3

Naaman told this to the Syrian king who sent him to the king of Israel with this message:

“Then he brought the letter to the king of Israel, which said, ‘Now be advised, when this letter comes to you, that I have sent Naaman my servant to you, that you may heal him of his leprosy.'” – 2 Kings 5:6

“Why have you torn your clothes? Please let him come to me, and he shall know that there is a prophet in Israel.” – 2 Kings 5:8

So, Naaman presented himself before Elisha and was told to go and dip himself seven times in the river Jorden and when he did, his leprosy was totally healed! Now in those days leprosy was like the worst cancer you could have and Naaman was really thankful and recognized that the true God was in Israel.

“And he returned to the man of God, he and all his aides, and came and stood before him; and he said, “Indeed, now I know that there is no God in all the earth, except in Israel; now therefore, please take a gift from your servant.” – 2 Kings 5:15

But Elisha refused to take the gift, saying –

Unfortunately, Elisha had a servant named Gehazi, who ran after Naaman and making up a story about visiting sons of the prophets coming and being in need, he asked Naaman for a gift for them, but he took the gift for himself. Now, Elisha knew in the Spirit what had happened and confronted Gehazi –

“Then he said to him, “Did not my heart go with you when the man turned back from his chariot to meet you? Is it time to receive money and to receive clothing, olive groves and vineyards, sheep and oxen, male and female servants? Therefore the leprosy of Naaman shall cling to you and your descendants forever.” And he went out from his presence leprous, as white as snow.” – 2 Kings 5:26, 27

In my last article, named Awake my Soul!, I taught that the soul of man was originally meant to be the glory of God on a man, but we lost it due to sin. However thanks to Jesus, when we repent (turn from our wicked ways) and confess Jesus as Lord, we are born again. The Holy Spirit once again connects with our soul, the glory returns, and we become a new creation! Created for the Presence of God! Now I believe there is about to be a great outpouring of God’s glory on the earth. And that God is once again going to reveal Himself to mankind in supernatural ways. It is called the ‘latter rain’ in the Bible –

‘then I will give you the rain for your land in its season, the early rain and the latter rain, that you may gather in your grain, your new wine, and your oil.” – Deut. 11:15

“Be glad then, you children of Zion, And rejoice in the LORD your God; For He has given you the former rain faithfully, And He will cause the rain to come down for you—The former rain, And the latter rain in the first month.” – Joel 2:23

“Ask the LORD for rain In the time of the latter rain. The LORD will make flashing clouds; He will give them showers of rain, Grass in the field for everyone.” – Zech. 10:1

“Therefore be patient, brethren, until the coming of the Lord. See how the farmer waits for the precious fruit of the earth, waiting patiently for it until it receives the early and latter rain.” – James 5:7

But, we are going to have to repent from allowing the spirit of lawlessness to run rampant in our land. We have flouted God’s laws, kicked Him out of our national life, and followed after the gods of Baal, which are humanism, progressivism, socialism, marxism, and atheism. We desperately need Almighty God to come down and fight for us against the spirits of lawlessness that are controlling our politics, our news media, our entertainment, and even some of our churches! We now have an entire political party that is doing the devil’s work – the Democrat Party, urging us to abort our children (who are God’s blessing), corrupting the institution of marriage being between one man and one woman, calling homosexuality and lesbianism normal when God calls them abominations. We have forgotten our founding covenant with God which was laid down by the Pilgrims and Puritans.

Before there can be a ‘latter rain’, we need to repent from these failures and return to our original calling as a nation and as individuals. We need to be able to say, as David did, “He restores my soul; He leads me in the paths of righteousness For His name’s sake.” And, “I said, “LORD, be merciful to me; Heal my soul, for I have sinned against You.” Then we will be able to say, “Bless the LORD, O my soul; And all that is within me, bless His holy name!

We need to be like Elisha who declared the word of the Lord to Naaman. We need to say ‘wash away the sins of the flesh’ even up to seven times. And we need to take no money, no credit, for the miracle that God does. Sadly there are many pastors who are working for money today, instead of for God. You cannot peddle the word of the Lord for money! And there are many ministries that take gifts to help those in need but give most of the money to themselves. There are many who are putting their trust in man instead of in the Lord but, they will be made to echo what the king of Israel realized, “Am I a God?” There is no help in government because it gets all its help from the Lord in the first place, so we must turn to God for help. Finally, do not think that God can use only kings, commanders, or prophets to do His work. He can use a lowly slave girl whose testimony led to the cleansing of Naaman. And remember, if like Gehazi, you lust after the riches of this world, all you will end up with is the corruption of this world.

Turn back to the Lord with all your heart and pray the Lord for the ‘latter rain’ in your life. For it will surely come, and soon I believe.