In one of my last articles, I said “When the going gets tough, then the tough get going!” Well the going is getting tough, and I suspect it may get even tougher. But, I remember years ago when I was going through some persecution because of my stand for Scriptural truth, I was complaining to the Lord and He directed me to a passage in Jeremiah –

Did I expect the enemy to just role over and give up? No, what I needed was to gird up my loins for the battle! That is where we are now. When it looks like the House of Representatives, the Senate, and the Presidency has been given over to the lawless one of 2 Thessalonians 2:9 and all is lost, don’t forget who God is. He is not overwhelmed at the lawless actions of people or of the enemy Satan. Scripture says in Psalm 2 –

Why do the nations rage, and the people plot a vain thing? The kings of the earth set themselves, and the rulers take counsel together, against the LORD and against His Anointed, saying, “Let us break Their bonds in pieces And cast away Their cords from us.” He who sits in the heavens shall laugh; The Lord shall hold them in derision. Then He shall speak to them in His wrath, and distress them in His deep displeasure: “Yet I have set My King On My holy hill of Zion.” – Psalm 2:1-6

The passage of Jeremiah 12 still speaks to me today. It is easy to lose faith when Representatives and Senators and a Vice President, in which I trusted, sell me out and side with the enemy. But what it should do is remind me to not trust in the arm of flesh, in which there is no strength against the lawless one of Satan. The Psalm comes to mind – “Some trust in chariots, and some in horses; But we will remember the name of the LORD our God.” (Ps. 20:7). Remember, God has a ‘way’ that is hidden from the eyes of flesh, as Job says –

“There is a path which no fowl knoweth, and which the vulture’s eye hath not seen: The lion’s whelps have not trodden it, nor the fierce lion passed by it.” – Job 28:7, 8

This pathway is only revealed to the eyes of those in the Spirit who are walking by faith in God. Like the Hebrew children who were standing with their backs to the Red Sea and Pharaoh coming up behind them, they couldn’t see the way out because it was buried under the sea but, God knew it was there all the time. It only took Moses’ arm of faith to open it. 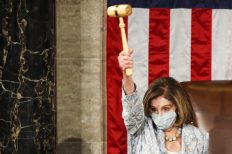 Meanwhile God is letting us see those turncoats among us. He is letting the dross rise to the top so the silver can be purified. He is letting us see the foolishness of those who think they have won but have not. He is letting us see what a government under the Democrats will be like, as Speaker Pelosi waves her gavel to rewrite the House Rules and silence any dissenting voices: She unveiled the rules for the 117th Congress on Friday, which contain “future-focused” proposals, including the elimination of gendered terms, such as “father, mother, son, and daughter.”

These people are doing exactly what Psalm 2 states: “and the rulers take counsel together, against the LORD and against His Anointed, saying, “Let us break Their bonds in pieces And cast away Their cords from us.” But God is laughing at them.

The United States is filled with proud egotistical leaders in the Government, and industry, and media, and in the Church who somehow think their importance is greater than the Almighty God. But, as Psalm 2 states, God “shall speak to them in His wrath, and distress them in His deep displeasure:”  I do not know when God will do this but, when He does, He will shake the tree that is America so hard that all her ripe and corrupt fruit of ‘political power’, ‘media blowhards’, ‘Hollywood liars’, ‘judicial untruth’, ‘educational leftists’, humanists, socialists, Marxists, and every other false thing will fall to the ground to be eaten by the wild life. They will learn the hard way the fear of the Lord!

So, to the faithful, I say don’t give up, wait patiently on the Lord for He has a ‘pathway’ that is unseen to the eyes of flesh as Job said. And He will reveal it in His good time. Meanwhile, we are to stand, gird up with spiritual armor against the wiles of the devil, knowing that we will have the victory.

May God encourage you with this word.

One thought on “Running with the Horses”