How is He Coming? 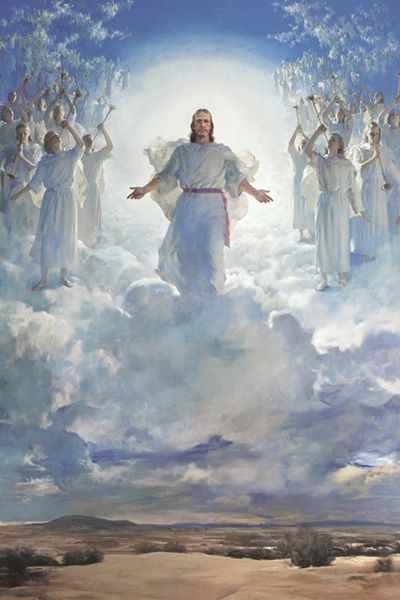 Jesus is coming back! Now, we will consider the question – how? When Jesus ascended into heaven the first time, the angels declared to the disciples,

This same Jesus, which is taken up from you into heaven, shall so come in like manner as ye have seen him go into heaven. – Acts 1:11.

At His trial, Jesus told the High Priest,

. . . Hereafter shall ye see the Son of man sitting on the right hand of power, and coming in the clouds of heaven. – Matthew 26:64.

When Jesus comes a second time, He will come on the clouds of heaven. We are told in Revelation 1:7 that when He comes “every eye shall see Him”. Paul gives further description of the event:

For the Lord himself shall descend from heaven with a shout, with the voice of the archangel, and with the trump of God: and the dead in Christ shall rise first: – 1 Thessalonians 4:16.

Jesus Himself described His coming –

For as the lightning cometh out of the east, and shineth even unto the west; so shall also the coming of the Son of man be. – Matthew 24:27.

Let me summarize: 1) He comes on the clouds, 2) He comes with the earth shattering shout of an archangel, and 3) His coming is so bright it is like lightning that shines from east to the west. His coming is so spectacular that every eye will see Him. It is certainly not a “secret” coming as some have taught. There will be no doubt as to who is arriving! The righteous and the wicked alike will know it is Him. The wicked try to hide, even calling the rocks down on themselves, but the righteous “lift up their heads, for their redemption draweth near.” – Luke 21:28.

His second coming is so powerful that even the dead in Christ will rise from the dead! And those who are yet alive will be changed and caught up to meet Him in the air –

Then we which are alive and remain shall be caught up together with them in the clouds, to meet the Lord in the air: and so shall we ever be with the Lord. – 1 Thessalonians 4:17.

In the Latin Vulgate version of the Bible, the word translated “caught up” is ‘rapio‘, from which we get the word ‘rapture’. Some have tried to separate this rapture from His revelation to support their secret coming theory, but, Scripture is plain – they all happen together! And the first resurrection, the resurrection of the righteous, happens as well.

As He comes with the clouds, and the shout of the archangel, and as lightning across the sky, so bright that every eye will see Him; the dead in Christ are resurrected and we who are yet alive will be transformed and caught up to meet Him in the clouds. Paul wrote the Corinthians about it as well; “In a moment, in the twinkling of an eye, at the last trump: for the trumpet shall sound, and the dead shall be raised incorruptible, and we shall be changed.” – 1 Corinthians 15:52. The rapture and the revelation of Christ both happen at the same time.

There is another very interesting aspect of this event. In 1 Thessalonians 4:17, Paul writes that we rise to “meet” the Lord in the air. The Greek word translated ‘meet’ is ‘apantēsis’, and it is only used four times in the New Testament. An example is when Paul was on his way to Rome, the brethren there came out to ‘meet’ (same word apantēsis) them and escort them into Rome. So we see that when we rise to meet the Lord in the air, it is to greet Him and accompany Him back to the earth, where we will help Him overcome and judge the wicked. The Book of Jude quotes a prophesy of Enoch that describes this;

And Enoch also, the seventh from Adam, prophesied of these, saying, Behold, the Lord cometh with ten thousands of his saints, To execute judgment upon all, and to convince all that are ungodly among them of all their ungodly deeds which they have ungodly committed, and of all their hard speeches which ungodly sinners have spoken against him. – Jude 1:14, 15.

The redeemed of the Lord will be active in His victory right from the beginning of His second coming.

In the interest of Scriptural honesty, it does seem that the Lord’s Second coming involves a longer period of time than a 24 hour day. For example, when the Lord rides forth out of heaven with the armies of heaven His robe is dipped in blood –

“Now I saw heaven opened, and behold, a white horse. And He who sat on him was called Faithful and True, and in righteousness He judges and makes war. . . . He was clothed with a robe dipped in blood, and His name is called The Word of God. And the armies in heaven, clothed in fine linen, white and clean, followed Him on white horses.” – Rev. 19:11-14

Where did He get His robe dipped in blood? I believe it occurred at Bozrah. In Revelation 12 when the Antichrist attacks Jerusalem, Israel (the woman) flees into the wilderness where she has a place prepared by God for one thousand two hundred and sixty days (Rev. 12:6). where is this wilderness? You have to look at the Old Testament to find out. The prophet Micah begins the story –

“I will surely assemble all of you, O Jacob, I will surely gather the remnant of Israel; I will put them together like sheep of the fold (Hebrew Bozrah), Like a flock in the midst of their pasture; They shall make a loud noise because of so many people. The one who breaks open will come up before them; They will break out, Pass through the gate, And go out by it; Their king will pass before them, With the LORD at their head.” – Micah 2:12, 13

The prophet Isaiah finishes the story –

“The sword of the LORD is filled with blood, It is made overflowing with fatness, With the blood of lambs and goats, With the fat of the kidneys of rams. For the LORD has a sacrifice in Bozrah, And a great slaughter in the land of Edom. . . . For it is the day of the LORD’s vengeance, The year of recompense for the cause of Zion.” – Isaiah 34:6-8

It appears that the ‘wilderness’ mentioned in Revelation 12 is in the land of Edom, which is south of the Dead Sea and is known for it’s sheep folds. There the shepherds build rock enclosures for their flocks of sheep to protect them from the wolves and then they would break down a portion of the wall to lead the sheep out in the morning. Notice that the Jews go into the fold as Jacob but, they come out as Israel, which means Prince with God. Is this the Day when all Israel will recognize their Messiah as He comes to rescue them, as Paul wrote? Isaiah continues –

“Who is this who comes from Edom, With dyed garments from Bozrah, This One who is glorious in His apparel, Traveling in the greatness of His strength?— “I who speak in righteousness, mighty to save.” Why is Your apparel red, And Your garments like one who treads in the winepress? “I have trodden the winepress alone, And from the peoples no one was with Me. For I have trodden them in My anger, And trampled them in My fury; Their blood is sprinkled upon My garments, And I have stained all My robes. For the day of vengeance is in My heart, And the year of My redeemed has come.” – Isaiah 63:1-4

Now, this happens before John sees Him riding forth out of heaven with the armies of heaven following. Also, there is another mystery which is revealed by the prophet Zechariah –

“For I will gather all the nations to battle against Jerusalem; The city shall be taken, The houses rifled, And the women ravished. Half of the city shall go into captivity, But the remnant of the people shall not be cut off from the city. Then the LORD will go forth And fight against those nations, As He fights in the day of battle. And in that day His feet will stand on the Mount of Olives, Which faces Jerusalem on the east. And the Mount of Olives shall be split in two, From east to west, Making a very large valley; Half of the mountain shall move toward the north And half of it toward the south. Then you shall flee through My mountain valley, For the mountain valley shall reach to Azal. Yes, you shall flee As you fled from the earthquake In the days of Uzziah king of Judah. Thus the LORD my God will come, And all the saints with You (or Him).” – Zech. 14:2-5

Is this what John the revelator is referring to when he said Israel would flee into the wilderness? The phrase “Thus the LORD my God will come, and all the saints with Him” adds to the mystery. Just what is the sequence of events? In any case it does seem that the Day of the Lord is a longer period than just a normal 24 hour day.

My best advice is what Jesus gave – “Watch and pray”!