Isaiah prophesied that when Israel returned to the land, even the desert would blossom (Isaiah 35:1), and it has. The land that was barren and waste is now re-forested and Israel is the leading producer of fruit and vegetables in the area. Many prophesies of their return have been fulfilled; for example, the promise of a restored language (Zeph. 3:9), and going into captivity as two nations, Judah and Ephraim, but returning as one nation (Jer. 3:18 and Ezek. 37:22). Ezekiel also prophesied they would become a very great army (Ezek. 37:10), and we have witnessed that as well. As Israel prospered, her neighbors became resentful and have attacked her without ceasing. The nation of Israel began with a war, the war of 1948, and has continued on in the midst of repeated wars; 1956 Sinai War, 1967 6-day war, 1973 Yom Kippur war, 1982 Lebanon war. All of these wars were started by Israel’s Muslim neighbors but won by Israel, and in each of them Israel gained land, almost recovering the land promised by God to Abraham. This too, was prophesied by Isaiah 11:14 –

But they shall fly upon the shoulders of the Philistines toward the west; they shall spoil them of the east together: they shall lay their hand upon Edom and Moab; and the children of Ammon shall obey them.

Just substitute the modern word for Philistine – Palestine – and you can see prophesy happening before your eyes! And this verse may not be finished yet.

Since that time, a new era of diplomatic war has been entered into; a war in which the nations of the world turn against Israel, demanding that she give up land for peace, a peace the Muslims do not want. The only peace that will please the Muslims is the peace of death for Israel. Since they could not win in all-out war, the Muslims have resorted to terrorism, until they are strong enough for another war. Meanwhile, they train their children to hate Israel and prepare for war.

The scenario goes like this: Muslims commit an act of terror against Israel, Israel responds and the United Nations condemns Israel for its actions. Of the hundreds of UN resolutions in the last few years, nearly all of them have been against Israel for actions most reasonable people would consider self defense. Now, over a hundred nations are demanding that the PLO be given a state of its own and of course, Israel must give the land to accommodate it! But these nations do not understand the terrible price tag for such actions –

I will also gather all nations, and will bring them down into the valley of Jehoshaphat, and will plead with them there for my people and for my heritage Israel, whom they have scattered among the nations, and parted my land. – Joel 3:2 (emphasis mine)

The valley of Jehoshaphat means the valley of judgment! Those nations who divide up the land will all perish, and the reason – they tried to divide the land of Israel. In other Scripture God says He will make Jerusalem a ‘burdensome stone’ and all who try to lift it will injure themselves (Zechariah 12:3). History proves the veracity of this curse by God.

God is using the Israeli wars for two purposes: 1) They will humble Israel and bring her back to God, and 2) They will bring judgment on the nations that have earned it. There are at least two more such wars prophesied that you can read about yourself: 1) the war described in Psalm 83, every nation described there is a Muslim nation, and 2) the war of Ezekiel 38 and 39 which I believe tells of Russia at the head of a Muslim coalition. These may represent one war or they may be separate. Then finally, there will be the battle of Armageddon in which Satan and the antichrist will marshal the nations of the world against Jerusalem in one final attempt to destroy all God has planned. They will fail and the everlasting kingdom of God will be revealed to the world for a thousand years – Revelation 20:6.

As we watch and pray about these events, we need to understand that God is doing exactly what He said He would do – purifying His own and giving all (Jew and Gentile) a chance to set their lives right with Him. All through this time one Scripture is true – “All who call upon the Lord shall be saved.” It is our job, as watchmen, to be a witness for Him.

We are living near the end of the Gentile nations shown to King Nebuchadnezzar in a dream and Daniel in vision (Daniel 2 and 7). Fear and turmoil will reign in the land as all man’s established rules and governments disintegrate. These will all come crashing down and the everlasting kingdom of God will finally be established.

What are we to do that will enable us to survive these events? Malachi was given the answer from the Lord –

But who can endure the day of His coming? And who can stand when He appears? For He is like a refiner’s fire and like launderers’ soap. . .

Then those who feared the LORD spoke to one another, And the LORD listened and heard them; So a book of remembrance was written before Him For those who fear the LORD And who meditate on His name. “They shall be Mine,” says the LORD of hosts, “On the day that I make them My jewels. And I will spare them as a man spares his own son who serves him.”  Then you shall again discern between the righteous and the wicked, between one who serves God And one who does not serve Him. – Malachi 3:2, 16-18

No one can endure these days by their own strength or goodness but, the grace of the Lord will be extended to those who fear the Lord, do what He says, and live in the fellowship of His body, the Church. This does not mean a one day per week for several hours’ fellowship. It means daily fellowship around the Word of God and the Communion Table and with the Holy Spirit.

Remember, Israel is God’s flag, waving to the nations to get their attention. “Wake up, the end is nearing, you don’t have long!” As we see the pressures increasing in the Mid East, tensions are rising and nations are choosing sides. Iran is building its strategies and strengths, supplying its vassals with money and arms, getting them ready to attack Israel. They are surrounding Israel with Hezbollah in Lebanon on the North and Hamas on the Southwest and Arab terrorists on the South in the Sinai Desert. Iran is also moving into Syria setting up bases from which it can attack Israel. 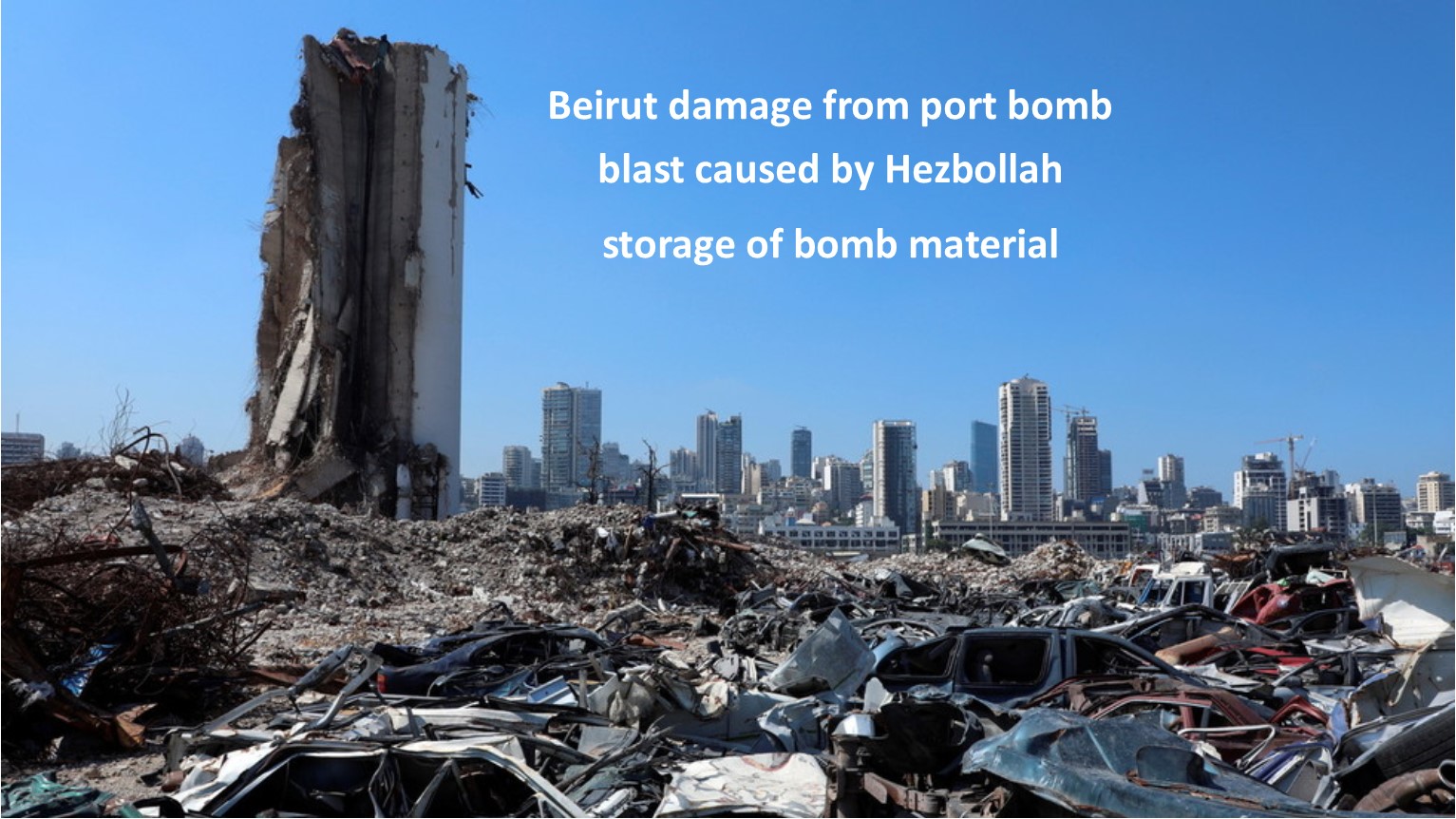 The nation of Lebanon is about to fail. It doesn’t have food for it’s citizens and can supply only a few hours of electricity per day. This all began with a huge explosion in Beirut caused by explosives Hezbollah was storing in Beirut’s port. Meanwhile, Hezbollah in southern Lebanon grows stronger and is a threat to take over the Lebanese government.

Hamas seeks to control all Arabs within Israel, thus taking over the PLO. But, it’s ultimate goal is the destruction of Israel, not peace, not a two-state solution, and not just Jews in Israel but in the world!

Sadly, America has now elected pro-Hamas and pro-Hezbollah Representatives to the US Congress, Omar Ilhan of MN and Rashida Tlaib of MI. Both lobby for these anti-Israel groups within our Congress and make anti-Semitic remarks, and Speaker Pelosi fails to censor them.

We in the Church should be aware of these things because the Word of God tells us to “Pray for the peace of Jerusalem.” But sadly, even some in the Church are aiding these anti-Israel movements in such organizations as BDS (Boycott, Divestment and Sanctions). Two main evangelical churches bodies, the Presbyterian Church (PCUSA) and the United Church of Christ (UCC), have joined this movement.

All these happenings are just signs that God is moving to fulfill His promises concerning the nation of Israel. If you are wise, you won’t oppose Him, rather you will prayerfully support Him and pray for Israel.