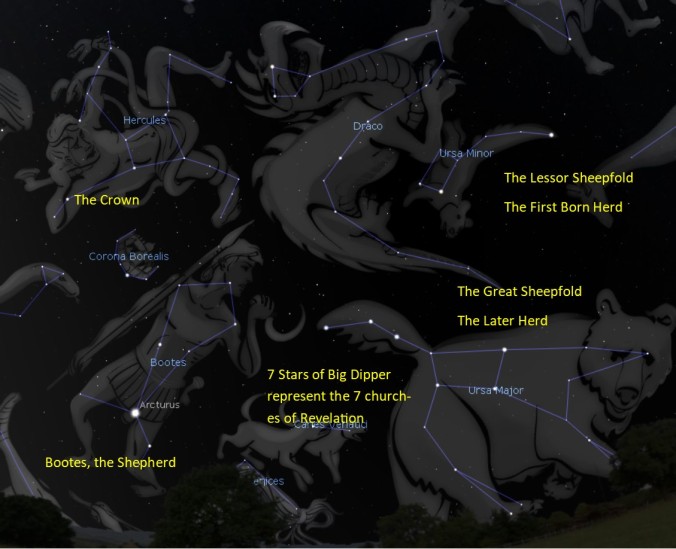 Did you know that these constellations are talked about by God in the Bible? At a time when Job was complaining to God about his troubles, God asks Job –

“Canst thou bring forth Mazzaroth in his season? or canst thou guide Arcturus with his sons?” – Job 38:32

The Lessor Sheepfold is also known as ‘the first born’ herd and they are referred to by the prophets Isaiah and Micah as during the last days they flee from Jerusalem into the wilderness of Edom to Bozrah for 3½ years, where the veil is removed from their eyes to finally see Jesus as their Messiah. The name Bozrah means ‘sheepfold’. They are known as the first born because the Great Shepherd, Jesus, preached the Gospel to them first. All the first disciples were Jewish and God made His first covenant with the children of Abraham, the Jews. so the Lesser Sheepfold contains a Jewish remnant.

But, the Great Shepherd, Bootes, has two sheepfolds that follow Him.

“And other sheep I have, which are not of this fold: them also I must bring, and they shall hear my voice; and there shall be one fold, and one shepherd.” – John 10:16

Jesus was referring to the Great Sheepfold known as Church of the ‘latter herd’ or ‘after-born’, the Gentiles which would be greater in numbers than those of the first-born. This is what the Big Dipper represents. Both the Little Dipper and the Big Dipper have seven principal stars which are thought to represent the seven churches Jesus sent the letter to in Revelation.

Jesus said, though they are two folds now, they shall be one fold.

“Having abolished in his flesh the enmity, even the law of commandments contained in ordinances; for to make in himself of twain one new man, so making peace; And that he might reconcile both unto God in one body by the cross, having slain the enmity thereby: And came and preached peace to you which were afar off, and to them that were nigh. For through him we both have access by one Spirit unto the Father.” – Eph. 2:15-18

Bootes, or Arcturus the Great Shepherd, will lead both His folds to receive the Crown of Life, the Corona Borealis.

“Blessed is the man that endures temptation: for when he is tried, he shall receive the crown of life, which the Lord hath promised to them that love him.” – James 1:12

Jesus told the Church of Smyrna, the persecuted church –

“Fear none of those things which thou shalt suffer: behold, the devil shall cast some of you into prison, that ye may be tried; and ye shall have tribulation ten days: be thou faithful unto death, and I will give thee a crown of life.” – Rev. 2:10

The message of these constellations is “the Lord will be faithful to lead us to the crown of Life” only be faithful to endure temptations of the devil, even if you have to suffer at his hands. God knows all about everything we will go through and He is saying don’t give into fear. God placed these constellations in the heavens in the beginning and He is speaking to us as He did to Job –

“Canst thou bring forth Mazzaroth in his season? or canst thou guide Arcturus with his sons?”

In other words, I AM in control and Jesus, Arcturus, will safely lead us home.