“Truth shall spring out of the earth, and righteousness shall look down from heaven.” – Psalm 85:11

In other words, Righteousness is God’s response to Truth coming out of the earth, from men. God’s response is then linked to goodness, the land yielding its increase, and mankind’s pathway will follow in God’s footsteps!

But what do we see in the United States today? Evil is prevailing over goodness; famine is threatening us along with inflation. Our government is more concerned with lining their own pockets than caring for the people. It is all because of the lack of truth. There is no truth in the media who are nothing more than propaganda spokesmen for ‘one world’ globalists.  Education has been taken over by woke advocates seeking to subvert our children to their communist ways.

But, worst of all, there is no message of truth coming from the pulpits of America’s churches! Half the pastors are preaching Democratic messages that misdirect their litigant’s attention from the evils that are going on – preferring those politicians who are promoting the slaughter of unborn babies to those who are pro-life, preferring those politicians who promise a little money to those who open the eyes to the evil that is going on!  Then they dare to pervert God’s word by quoting Romans 13 –

“Let every soul be subject to the governing authorities. For there is no authority except from God, and the authorities that exist are appointed by God.” – Rom. 13:1

But they fail to teach the rest of the scripture –

“For rulers are not a terror to good works, but to evil. Do you want to be unafraid of the authority? Do what is good, and you will have praise from the same. For he is God’s minister to you for good. But if you do evil, be afraid; for he does not bear the sword in vain; for he is God’s minister, an avenger to execute wrath on him who practices evil.” – Rom. 13:3, 4

When leaders enact laws that are evil, they are not leaders appointed by God, but by the enemy, and we do not have to obey them! When they enact laws supporting abortion, or homosexuality, or lesbianism, or transgenderism – all of which God has clearly spoken against – they are not God appointed rulers! So why are these pastors telling you to vote for them?

The last prophet in the Old Testament spoke to the pastors of his day about these very things. Because they were not representing God correctly, they received a curse on their ways. God held up Levi as an example for them to emulate –

“My covenant was with him, one of life and peace, and I gave them to him that he might fear Me; So he feared Me And was reverent before My name. The law of truth was in his mouth, And injustice was not found on his lips. He walked with Me in peace and equity, And turned many away from iniquity.” – Mal. 2:5, 6

Malachi finishes his book by speaking about the coming of the Lord.

“And the Lord, whom you seek, Will suddenly come to His temple, Even the Messenger of the covenant, in whom you delight. Behold, He is coming,” Says the LORD of hosts.” – Mal. 3:1

The prophet Isaiah also speaks to this time –

” Arise, shine; For your light has come! And the glory of the LORD is risen upon you. For behold, the darkness shall cover the earth, and deep darkness the people; but the LORD will arise over you, and His glory will be seen upon you.” – Isa. 60:1, 2

Notice, Scripture does not say it will be a pleasant time when He comes, but one full of the darkness of evil.

“For behold, the day is coming, burning like an oven, and all the proud, yes, all who do wickedly will be stubble. and the day which is coming shall burn them up,” Says the LORD of hosts, “That will leave them neither root nor branch.” – Mal. 4:1

“But who can endure the day of His coming? And who can stand when He appears? For He is like a refiner’s fire and like launderers’ soap. He will sit as a refiner and a purifier of silver; He will purify the sons of Levi, and purge them as gold and silver, that they may offer to the LORD an offering in righteousness.” – Mal. 3:2, 3

Jesus said He did not come to destroy the Law, but to fulfill it. The true Gospel message provides for forgiveness and healing from sin but it does not provide a free ticket to keep on sinning! His Redemption provides the Grace we need to overcome sin but as Paul writes,

“What shall we say then? Shall we continue in sin that grace may abound? Certainly not! How shall we who died to sin live any longer in it? Or do you not know that as many of us as were baptized into Christ Jesus were baptized into His death? Therefore we were buried with Him through baptism into death, that just as Christ was raised from the dead by the glory of the Father, even so we also should walk in newness of life.” – Rom. 6:1-4

Yet many pastors think that if they just teach John 3:16, they are teaching the Gospel. Jesus’ gospel not only covered John 3:16 but it also covered all of God’s truth, even the truth contained in the Old Testament! Jesus spoke against the evils of His day and warned about the evils to come and so did the Apostles. In other words, they engaged in politics! In the early days of our founding, most of the sermons preached from America’s pulpits were political in nature and they guided the nation and protected it from the evils that were enveloping other nations.

So, why are these evils overcoming our nation? Because truth has ceased being preached in our pulpits! The American Church has lived so long without hearing truth that it easily swallows every lie put out by the enemy, Satan. One of biggest lies perpetrated is the onslaught of the Chinese virus. Few have heard of the true origins of it and the media and health organizations carefully try to hide it. The truth is revealed by Dr. Ardis in the link that follows.

But, an even greater truth is the antidote to it – sheep’s blood! 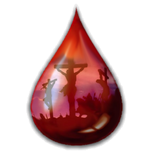 THE BLOOD OF A LAMB NEUTRALIZE POISEN

Jesus, the Lamb of God is still defeating Satan, the Serpent! This is the truth!