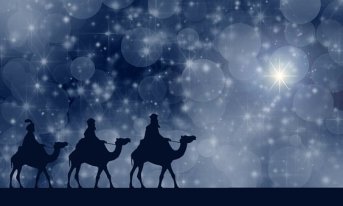 Christmas is a long-standing tradition in America, but the truths revealed in Christmas are under attack today from demon inspired left-wing ideologues. So, let’s just look at Christmas once again.

“Now the birth of Jesus Christ was on this wise: When as his mother Mary was espoused to Joseph, before they came together, she was found with child of the Holy Ghost.” – Matt. 1:18

“Then Joseph her husband, being a just man, and not willing to make her a public example, was minded to put her away privily. But while he thought on these things, behold, the angel of the Lord appeared unto him in a dream, saying, Joseph, thou son of David, fear not to take unto thee Mary thy wife: for that which is conceived in her is of the Holy Ghost. And she shall bring forth a son, and thou shalt call his name JESUS: for he shall save his people from their sins.”– Matt. 1:19-21

Second, Joseph, her husband, was a just man, which means he followed the law of the land and of God. That means that having sex out of wedlock was unjust and a sin so, he was going to divorce her. This drives Hollywood crazy and all the liberal fornication pushers. But an angel appeared to him in a dream (again smacks of the supernatural structure of the universe which drives Steven Hawking’s atheist followers crazy) and assures Joseph that Mary’s pregnancy is OK. Then Jesus, who is to be born, will save the people from sin. That assumes there is such a thing as sin, which modern left-wing liberals hate to admit.

“Now all this was done, that it might be fulfilled which was spoken of the Lord by the prophet, saying, Behold, a virgin shall be with child, and shall bring forth a son, and they shall call his name Emmanuel, which being interpreted is, God with us.” – Matt. 1:22,23

This means there is a God who existed from the beginning, and He speaks to His prophets’ messages for the future, which He knows beforehand! That means the evolutionists and big Banger’s have got it all wrong. Creation is not an accident but has a Creator who is actively involved with His creation.

Fourth, we are told by Luke that Jesus was born in Bethlehem of Judea –

“And Joseph also went up from Galilee, out of the city of Nazareth, into Judaea, unto the city of David, which is called Bethlehem; (because he was of the house and lineage of David:) … And she brought forth her firstborn son, and wrapped him in swaddling clothes, and laid him in a manger; because there was no room for them in the inn.” – Luke 2:4-7 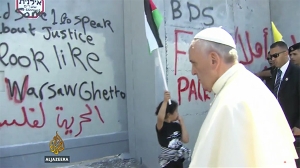 We see Jesus was born in Bethlehem, a city of David. It belonged to the Jews contrary to what the Palestinians and the Pope now say. And it was all prophesied years before –

“And thou Bethlehem, in the land of Judea, art not the least among the princes of Judah: for out of thee shall come a Governor, that shall rule my people, Israel.” – Matt. 2:6

It does make one wonder how Catholics, who make up a sizable number of Christians, can put up with a Pope that is so unchristian as to give Bethlehem to the Palestinians!

And sheepherders were the witnesses to this miracle –

“And there were in the same country shepherds abiding in the field, keeping watch over their flock by night. And, lo, the angel of the Lord came upon them, and the glory of the Lord shone round about them: and they were sore afraid. And the angel said unto them, Fear not: for, behold, I bring you good tidings of great joy, which shall be to all people. For unto you is born this day in the city of David a Saviour, which is Christ the Lord. And this shall be a sign unto you; Ye shall find the babe wrapped in swaddling clothes, lying in a manger. And suddenly there was with the angel a multitude of the heavenly host praising God, and saying, Glory to God in the highest, and on earth peace, good will toward men.” – Luke 2:8-14

Nativity scenes used to decorate our schools at Christmas time but, no more. Scenes portraying the Wise Men’s visit giving gifts to Jesus used to decorate public buildings but, no more. Atheists, Muslims, and LGBT advocates have now expunged them from the public view and have instead populated schools and libraries with visits of Drag Queens flaunting their immorality for public view. One Texas English teacher, Anthony Lane. blasted parents who complained about the drag queen’s presence without their consent or knowledge, saying: “The public education system is not here to serve your archaic beliefs.” That teacher should have been removed or the parents should have removed their children from that school!

Yes, God’s message of Christmas has not changed – it is we who have changed. The Pilgrims and the Puritans and our Constitution gave us a firm foundation on which to build a nation and if it has been eroded it is our fault, those of us who know the truth.

But Christmas still tells its story. There is a supernatural God who has a moral standard He expects mankind to follow. He entered man’s history 2000 years ago as His Son, Jesus the Christ, was born to bring us salvation if we but acknowledge and follow Him. Jesus was born and died on a cross to purchase that salvation for us. As He came that first Christmas, He is coming again to gather all those who have accepted the truth of the Christmas story and claimed it’s reward – salvation.

Hidden in Christmas is another message as well. The governments of this world are all passing away and the time is growing short until that little baby who was born on that first Christmas will return as the Lion of Judah to establish a new worldwide kingdom known as the Kingdom of Heaven. Heaven will at last come down to earth!

One thought on “Christmas is Coming, a Light to the World”